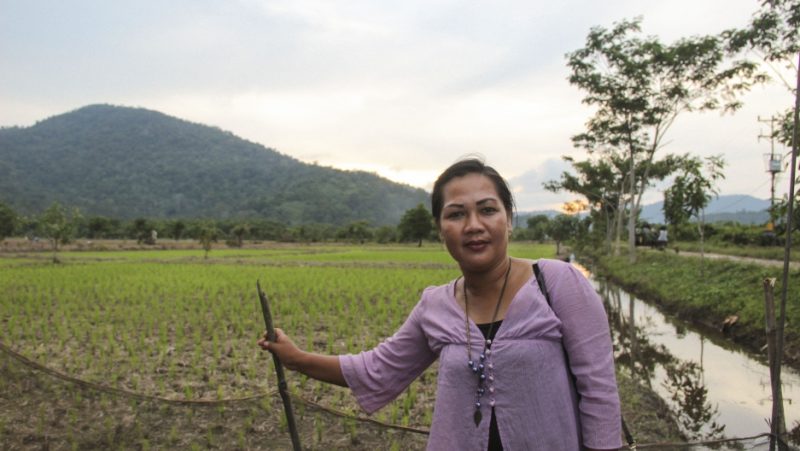 Hamisah, the first female village leader in the region of western Borneo, rallied her community to end illegal logging there. Credit: Carolyn Beeler

This story by Carolyn Beeler originally appeared on PRI.org on December 30, 2017. It is republished here as part of a partnership between PRI and Global Voices.

A main road through the district of Sedahan Jaya in western Borneo is just a ribbon of brown dirt. But that’s better than the muddy mess it used to turn into after heavy rains.

“The road was so bad when kids went to school, they came back with their legs covered in mud,” says a resident named Hamisah. “This was really sad to me.”

Hamisah, 43, has two sons and lives in one of the small houses nestled along that dirt road. From her yard, you can see some of the hills of the roughly 400-square-mile Gunung Palung national park rising in the distance.

That’s where the floodwaters would come from, and they caused problems bigger than muddied legs. Many of the 900 or so residents of Hamisah’s village are farmers, who work iridescent green rice fields that sit below the park.

“It always flooded when the farmers were about to harvest their rice, so we would lose our crops,” Hamisah says.

The problem, Hamisah says, was made worse by illegal logging in the park.

“Because of illegal logging, some hills don’t have a lot of trees anymore, so the land cannot absorb the water from the rain,” Hamisah says. “And so every year, there were big floods.”

A village gets its first female leader

I spoke with Hamisah in the front room of her small wooden house, where she rolled out a thick purple carpet for us to sit on.

She spoke emphatically and with her hands, looking crisp and professional in the withering tropical heat, even while getting up every few minutes to shoo chickens out her front door.

Hamisah never went to high school, and people say she used to be shy. But the flooding and the problems it was causing her community pushed her out of her comfort zone.

“I thought it was time for me to be brave and run for village leader,” Hamisah says.

There had never been a female village leader in the area. But Hamisah had some built-in support. She knew a lot of people through her work as a health aide, working for a local clinic to help people take their tuberculosis medication.

“Maybe because I’m a woman, I’m a mom, a lot of people came to me when they had a problem,” Hamisah says. “I listened and tried to suggest solutions. And so after a while, people started telling me I should run for office.”

She did, and she won, in 2013 becoming village leader of Sidorejo in the district of Sedahan Jaya.

Hamisah set to work trying to stop the illegal logging, beginning with the village’s women.

Hamisah says at the time, there was only one logger who actually lived in her village, and so she talked to his wife about the dangers of his job. What if her husband cut himself with his chainsaw, she asked? What if a tree fell on him?

“I started to make the wife talk to her husband about this, and push him to stop logging,” Hamisah says.

It worked. He gave up his chainsaw and got a job doing construction.

“In other cases, I talk to women about the future they want for their kids, with the forests and the same kinds of wildlife they had growing up,” Hamisah says. “So this is my strategy, telling the women about why we need to protect the village.”

A system of checkpoints and spies

But most of the loggers who were cutting down trees in the forested land surrounding Hamisah’s village actually came from outside of it. So once Hamisah had the locals on her side, she recruited some of them to help her catch outsiders driving through the village to get to the adjacent forests.

Hamisah called her helpers her “spies.” 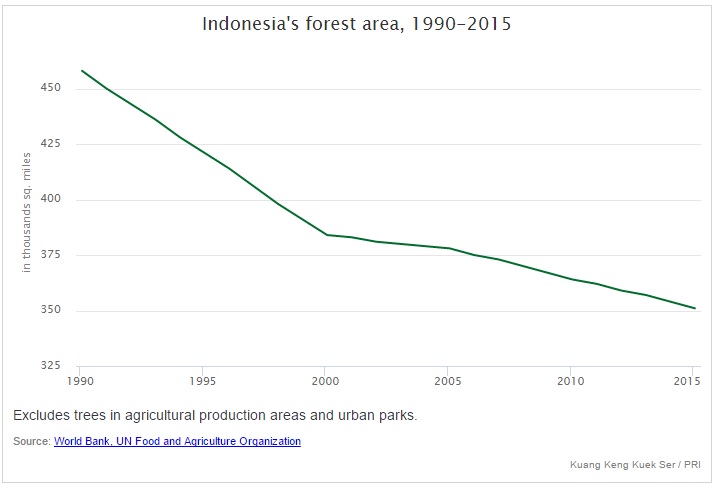 One was a shopkeeper named Selamat, who works in a little snack stand a few minutes down the road from Hamisah’s house.

“She asked me to tell if I saw anyone with a chainsaw driving by,” Selamat says, standing among the individually wrapped snacks hanging in his shop. “I said yes because I want to help.”

When Selamat spotted a logger, he would call the next spy down the line. A guy named Ridwan, down the road, would stop the car and try to convince the logger or loggers to turn around.

Ridwan recalled one of the stops he made in August 2014.

“[The logger] was angry, he told me he didn’t want to sell the wood, he just wanted to use it to build a house,” Ridwan says. “He argued a lot, but finally he left.”

Hamisah’s spy network caught five loggers in this way in the first year and a half she served as village leader. Ridwan says people don't try to log around the village anymore, and he attributes the change in large part to Hamisah’s leadership.

“She’s not like a man who can get angry easily, she has more discipline,” Ridwan says. “She’s direct and tough, but she’s the kind of leader who can get everyone to cooperate with her, follow her lead.”

The village also got cheaper health care at the clinic where Hamisah works because they stopped the logging. (The clinic incentivizes conservation by giving discounts to people who live in villages that have stopped or decreased illegal logging activity.)

Hamisah’s village is just one small place. Just six loggers have been stopped there so far. Meanwhile, forests across Indonesia are still being lost on a massive scale, and much of that’s happening legally. All that deforestation has helped the country become one of the biggest greenhouse gas emitters in the world.

Hamisah knows all this, but she says she’s been happy with what she’s been able to achieve.

“And not just me,” Hamisah says. “All of the women around here feel like we’re winners because we’ve been able to stop this logging.”

Hamisah says her experience is proof that if she can make a small difference in her own community, just about anyone can.

And those small differences can add up to something big.