Arthere in Istanbul’s Kadiköy is an independent art space taken in Istanbul, Turkey on December 12, 2016 by Derya Yücel/SyriaUntold

This story was originally written for Syria Untold by Nathalie Rosa Bucher. It is republished here as part of a partnership agreement.

Istanbul’s art market and its artistic scene have gradually been opening up since the mid-90s and reaching out to other countries. However, exchanges to Syria, were non-existent five years ago.

A few individuals and collectives, consisting mostly of Syrians but also Turkish, Arab and European nationals have set up structures to promote Syrian culture, work towards creating bridges with the local host community and art scene and provide meeting points for Syrian refugees in Istanbul, where they were estimated to number 330,000 in 2014. They also help newly arrived artists.

With the exception of the early 2000s, Turkish-Syrian relations have been tense for decades and due to no shared national language very limited. Turkey’s political landscape has become even more polarized in the last years. It is against this backdrop that Syrian artists, representing an art scene Turkish audiences and cultural practitioners were neither familiar with nor connected to, started to settle in the metropolis.

Pages, Istanbul’s first Arabic bookshop, opened its doors to meet the needs of the Syrians in the city and to bring the host and Arab immigrant communities closer. Founded by Syrian artists and publishers together with Turkish and non-Turkish partners, it has a café and a space for children and hosts cultural events.

A cozy room full of books in Arabic, Turkish, English and French greets visitors on a cold December night. Upstairs Arabic voices fill the café. “Every Thursday we have free legal advice available [for Syrian refugees],” one of the volunteers explained. 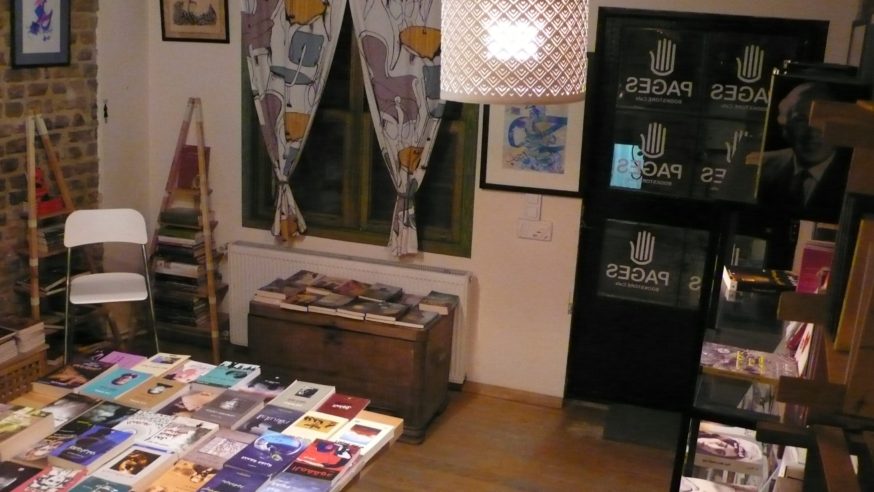 Pages Bookshop Café is Istanbul’s first Arabic bookstore and has become an important meeting place bringing both Syrians and Turks together for cultural and other events. Taken in Istanbul, Turkey on December 1, 2016 by Nathalie Rosa Bucher/SyriaUntold

Established in 2014, Arthere Istanbul, which has a commercial status, is an art centre and café in Kadıköy that recently started to offer art residencies. Since inception, it has sought to engage with the local art community and welcomes artistic experimentation.

On the ground floor behind an open window-paneled façade are tables, and a self-service kitchenette. The first floor is an art studio and in the basement is a dark room and bunk bed for emergency accommodation.

Arthere co-initiator and Syrian photographer Omar Berakdar has welcomed numerous Syrian artists. Many of them decided to depart Turkey, leaving instruments, shoes and a collection of suitcases at Arthere. Berakdar has also set up an archive to safe-keep art of artists abroad or frequently moving to avoid it getting damaged.

Istanbul, like Beirut, has become a pit stop for Syrian artists. The painter Hasko Hasko based himself here before travelling to Germany and Mohammed Zaza, also a painter who originally came to see a friend, has decided to stay — for a while.

Syrian visual artist Ali Abdulkerim, known as ʻAli Omarʼ, declared that his will would make him stay in Istanbul, but he has to cope with financial constraints. “Anywhere in the world, to make a living from art is not easy, maybe it is even more difficult in Turkey, and I was fully aware of this when I made my choice of being an artist. The market in Istanbul is not as strong, less people buy art and few have the means to do so. This affects all artists, including Turkish ones,” he explained.

His recent work – large portraits in rich hues – was among the drawings and paintings displayed at Arthere when a group of Turkish Art Management students from Bilgi University and their lecturer Derya Yücel came to visit on 1 December 2016.

“It was a very interesting experience to meet Arthere for my students,” Yücel reported later. “The students were interested in some artworks. They even told me that they would come to Arthere again. My students have never known such groups of artists before, and for this reason such meetings are exciting for them.”

“This year we want to work with Arthere in the project that we will prepare within the course. Through this project more students will meet Syrian artists. We will make announcements and people from the Turkish art scene will participate as audience. This will increase awareness,” Yücel outlined.

Turkish Art Management students listening to a presentation by Arthere co-initiator Omar Berakdar. Arthere is an art centre and café in Kadıköy that recently started to offer art residencies. Taken in Istanbul, Turkey on December 1, 2016 by Derya Yücel/SyriaUntold

Asked about the connection to Arab and in particular Syrian art that Turkish art institutions had before 2011, Asena Günal, program coordinator at Depo Istanbul, replied: “Few of us speak Arabic, we were meant to leave our Ottoman past behind [in line with Ataturk’s legacy] and Turks are quite Orientalist when it comes to Arabs…”

Depo is one of few institutions that has collaborated or showcased Syrian art. Popular SALT gallery Galata branch hosted Apricots from Damascus, a zine and exhibition project on diasporas past and present, organized by Atıf Akın and Dilek Winchester earlier this year, Günal pointed out. In spring, Depo teamed up with Şenay Özden, a member of Hamisch, a cultural house founded by Syrian and Turkish artists and intellectuals, for SaturDox 2016.

“What about the Syrian voices?”, asked Günal, “We don’t hear that! We don’t hear good representations of the Syrians from Turkish or Western media. So we organized six screenings of documentaries about Syria [SaturDox] that were all followed by discussions. It was really informative.”

Decades of limited freedom of expression left an indelible mark on Syrian artists and their output. “We had censorship in cinema during the Asad regime and this raises questions of verbal and non-verbal restrictions and self-censorship. We had, for example, the screening of Meyar al-Roumi’s Silent Cinema as part of our Synema series in October 2016. It is important to find a way around restrictions and barriers to deliver an honest message; asking questions not providing answers,” Berakdar argued.

“It is crucial to have Syrian and Turkish collaborations also given that Syrian artists, notably filmmakers, have for decades had to find ways around prohibitive working conditions.”

Günal defined Depo as “an alternative space, where dissident voices and Syrian voices are on the agenda. Part of the exhibition by Mohammad Zaza, who like many artists wanted to share his work with Turkish audiences, we used this opportunity to have a debate around art, oppression and creativity.”

Based in Istanbul for the past four years and fluent in Turkish, Berakdar advised the students from Bilgi University. “The first challenge you’ll face is money, of course. I studied media, art and chemistry and I do side jobs for pharmaceutical companies that bring in some money. […] Grants run out.”

The next day, Berakdar explained that Turkish society was still getting used to Syrian artists. “The students yesterday were excited, so you need to reach out. Here in Turkey people are more into concerts and theatre than galleries and fine art,” he said. “You just can’t expect the same interest and turnout in visual arts exhibition openings as in Lebanon or Syria.” 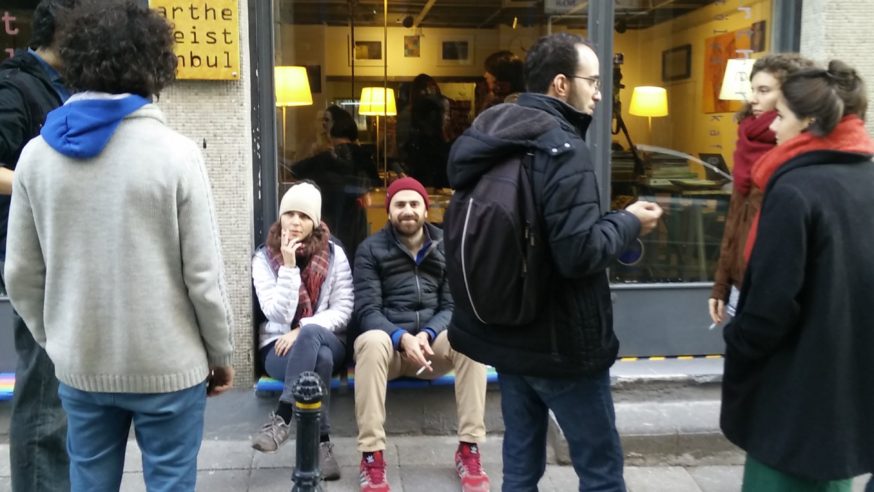 Arthere has successfully opened to the artistic community and the neighbourhood, allowing for networking and collaborations. Taken in Istanbul, Turkey on December 20, 2016 by Omar Berakdar/SyriaUntold

To empower Syrian artists and broaden their understanding of the local art scene, Arthere has been running many workshops and hosting talks, screenings, performances and concerts. Especially the latter have attracted new audiences, including a medley of experimental music, and various ensembles — even a 15-piece orchestra that performed traditional Turkish songs.

Istanbul boasts a marvelously diverse music scene, which is also one of its biggest artistic sectors. Among the Syrian artists that have moved to Turkey since 2011, musicians have indeed found it easier to establish themselves.

At Arthere, Syrian artist Abdulwahed al-Khamrah introduced audiences to Syria’s musical heritage and Saba Barada, featuring well-known oud player Wassim Mukdad, collaborated with two Turkish musicians. Arthere’s strategy and engagement over the past two years has changed, the aim is to be an artist agency rather than a gallery.

Much of Depo’s work has been depending on philanthropies and European funding but the latter is now at risk, especially after the withdrawal of Turkey from Creative Europe in October 2016. “We need to raise funds for exhibitions and get no Turkish funding at all when it comes to Syrian artists,” said Depo program coordinator Asena Günal.

“Gezi 2013 has been a turning point, society has become highly polarized. In cinema and theatre change has been drastic — for us less so. Being financially independent from the state makes us flexible and in terms of content we don’t face censorship. […] We receive less and less applications from abroad for collaborations. Many local artists are very depressed, they don’t want to stay here.”

Asked about Syrian artists’ contribution, Günal felt that as the focus was always on the West, Syrian artists allowed for new perspectives and to gain insight into Syria’s artistic production.

For Bilgi University lecturer Yücel, the presence of Syrian artists has manifested itself in the last two years, especially. “There has been an awareness of immigrant artists in the contemporary art scene in Istanbul also due to the media. And collective formations like Arthere have gained visibility. Not only Syrians, but also all independent artists should be supported in Istanbul’s art environment.”

Berakdar believes that Arthere had an effect on the local scene and the neighborhood. “We were the first to start an atelier open to the public, working together, we made it more international, we brought a lot of collaborations with the Turkish community here and that was beneficial to our artists. They break this feeling of alienation, they start to feel more at home here.”

After centuries of common history and decades of separation, facing — some shared — challenges, Syrian artists are permeating the Turkish art scene and creating important institutions and networks for both themselves and the host community.