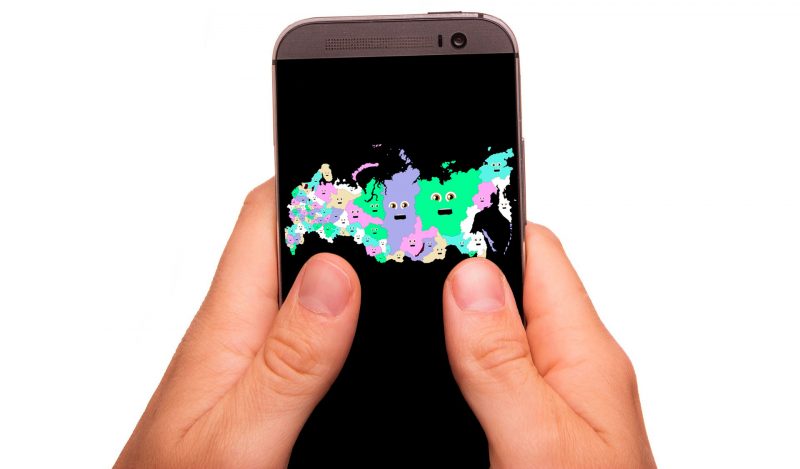 Today you can find dozens of music videos shared on YouTube by a channel called “Kids Learning Tube,” where an anonymous American man has spent the past two years uploading educational singing cartoons. This might not sound like much, but the channel now has more than 60,000 subscribers and its videos have been viewed more than 60.1 million times.

The subject matter for these songs is all over the map — many actually feature anthropomorphic maps of different countries, and other music videos are dedicated to topics as sundry as metalloids, dwarf stars, the larynx, the bladder, U.S. currency, Thomas Edison, the Tyrannosaurus rex, and more.

On Dec. 23, Kids Learning Tube uploaded a five-minute song explaining the 85 federal subjects of the Russian Federation. At the time of this writing, the video has more than 186,000 views. The tune includes lyrics like “We’re the 9 Krais / Which are the Territories of Russia / Join us to learn our names / We promise that we won’t rush ya.”

It’s somewhat unclear what has made this video and its many YouTube siblings such a hit. When it drew attention to the cartoons, the Russian news website Meduza described the songs as “very weird.”

I caught up with the man who writes these songs and creates the animations. He told me that he intends to conceal his identity until he reaches 1 million subscribers on YouTube. “That is my promise to my Kids Learning Tube students,” he said.

What I did learn about him is that he’s a stay-at-home dad and a musician and an animator, living in the United States. “The reason I started my channel is to teach children at their most absorbent and impressionable age,” he told me. “When my child was born I couldn't find anything at all on YouTube that was educational and sticky enough for kids to learn from. So having a musical background and teaching myself how to animate, I decided to give it a shot. It's been working very well so far.”

And this man is not exaggerating, when he says he is enjoying success online. Kids Learning Tube has attracted such a following that its most popular video is a 40-minute compilation of ballads about the Solar System. The montage has more than 7 million views.

The man says he hopes to write songs about the geography of every country in the world, releasing a new video every Friday. “I watch my child full time during the day and work at night. So I can only produce one video a week, presently,” he told me, as though his YouTube activity isn’t impressive enough.

Asked why he chose to make a video about Russia, he acknowledged the influence of the current political climate in the United States, though he shied from debating politics. “Russia was an easy subject to choose, because of the recent U.S. election and assumptions that Russia hacked and supposedly rigged the system. I'm not exactly sure what's true or not on that subject. I'm just a dad trying to teach his and all kids,” he said.

When I pointed out that his song about Russia rather controversially embraces Moscow’s territorial claims on Crimea and Sevastopol — land that most of the world still recognizes as part of Ukraine — the man behind Kids Learning Tube seemed to be taken aback.

“I was just going by Russia's own map,” he said.

Part of these videos’ appeal is undoubtedly the curiously American pronunciation of various regions around the world. In the Russian song, there are also some noticeable grammatical flubs, like lines that read “Hello I’m Chechen and I am Chuvash” (rather than “I’m Chechnya and I’m Chuvashia”), which make it sound like parts of the Russian map are literally members of ethnic minority groups.

This, at any rate, is what Russian journalist Vasily Sonkin seemed to enjoy, when he created a looping video on Coub.com showing Kids Learning Tube’s Chechnya introduce himself, over and over.

These music videos are more than just Internet oddities, however. When you speak to the channel's creator, it's hard not to be struck by the passion he has for work. And he’s aware that his pronunciation isn’t perfect, he says. “Though I don't always succeed, I do try my hardest.”

He says he’s noticed that his songs work best with children between the ages of three and four. “I believe music is the key to learning. It's fun and if it's catchy you have a perfect combination to educate anyone,” he says.

After speaking to this father/musician/animator, I showed the Kids Learning Tube video on Russia to my six-year-old daughter. She smiled while she watched it, and told me afterwards that she liked it. “I liked the funny faces and the singing,” she told me.

If you enjoy the videos at Kids Learning Tube, and want to support the channel, you can visit iTunes and buy the music to listen to when you’re away from YouTube. The “Learning Songs and Sing Alongs” album costs $10.