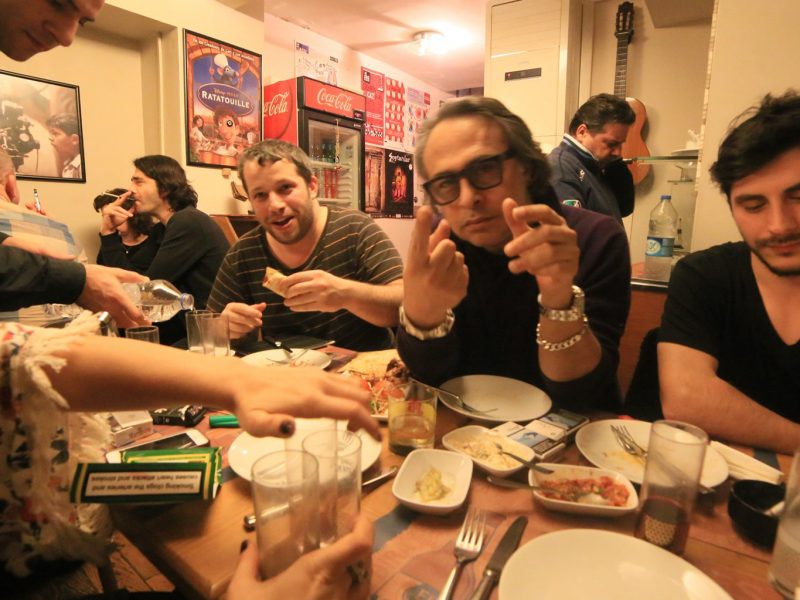 Turkish fashion designer Barbaros Şansal with friends in March 2015. Photo by the author.

Barbaros Şansal is a celebrity fashion designer in Turkey, an LGBT rights campaigner and political activist who took part prominently in the 2013 Gezi Park protests. For a number of years, the Turkish authorities have harassed him through court cases, and he has previously been attacked by an unnamed assailant while entering his studio near Istanbul’s Taksim square.

Şansal is a controversial figure in Turkey, and has not made a habit of toning down his criticism of the government and various scandals involving those connected to President Erdogan’s ruling AK Party. He has also been one of the most prominent gay public figures in a country where many people still do not accept homosexuality. He has hosted programmes on Turkish television, published books and is highly visible on social media, especially Twitter, where he often posts provocative videos criticising issues in Turkish society.

On New Year’s Eve, Şansal was at his home in Turkish-controlled Northern Cyprus, from where he posted a video filled with innuendos and criticism of Turkish society, saying:

“Are you still celebrating the new year while so many journalists are under arrest, so many children are being harassed and raped, there is so much fraud, bribery and bigots share crap on the streets together with religious annunciators”.

Barbaros Şansal @barbarosansalfn got deported & lynched by Erdogan's mob b/c of this video. He is in Regime hands! pic.twitter.com/q83cq7qbhU

Şansal’s closing phrase, “Drown in your shit, Turkey”, seems to have caused particular offence to nationalist politicians like Ankara Mayor Melih Gokcek, a man also known for his strange behaviour on social media.

Şansal was deported from Northern Cyprus, and on arrival in Istanbul was attacked by passengers and airport crew with shouts of ‘traitor’. Gokcek said on Twitter that the Turkish nation ‘reacted against him’ and told the designer ‘don’t irritate people!’

Many social media users in Turkey came to Şansal’s defence, calling him a ‘gentle soul’, ‘outspoken’ and ‘spontaneous’. Şansal had around 300,000 followers on Twitter, but since his arrest his account has been removed.

I only pray for barbaros to be released asap.. he is a gentle soul. When they go low we go high…

Others suggested that Şansal had paid the price for his notoriety and lack of anonymity, and that the arrest was a ‘warning’ to other dissidents.

He had the guts to say what most of us couldn't say. He wasn't anonymous, was clear& right! @barbarosansalfn #barbarossansalyalnizdegildir

The treatment of Barbaros Şansal is intended as a warning to anyone in Turkey with a dissenting opinion, anyone who stands out from the herd

Meanwhile, judicial authorities have released on bail a number of suspects being tried for their affiliations to ISIS. Many people criticised the incongruence between the treatment of a fashion designer critical of the state and those accused of terrorist connections.

With many opposition politicians, journalists and even celebrities now behind bars in Turkey, it looks as if President Erdogan will be able to secure the votes needed to make changes to the Turkish constitution that will grant the office of President greater executive powers, and allow him to remain in charge for a decade or more to come.

Turkey is facing multiple challenges with its intervention in Syria and the breakdown of peace talks with the Kurdish PKK militia. With the judiciary now largely under Erdogan’s control, prosecutors seem to be reinterpreting the law to go after any critics who anger them.

To many in Turkey, it is a reminder of the dark days of the 1990s in which government critics were often charged with ‘insulting Turkishness’, and when the economy suffered from high inflation and erratic exchange rates.

Kurdish politicians such as Layla Zana, who was imprisoned for taking her oath of office in Kurdish, is back behind bars once again. The arrest of a public figure like Şansal, who is unaffiliated with any political party, has many other government critics fearing they could be next.