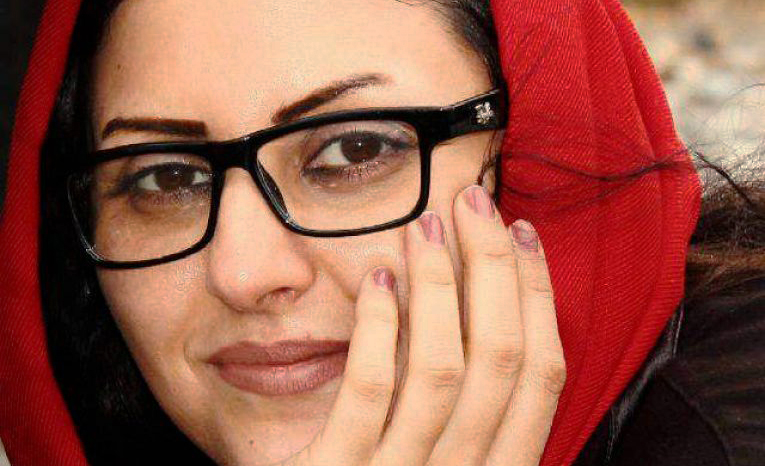 A photo of Golrokh Iraee, released on bail after pressure by her husband through a 71-day hunger strike. Photo from ICHRI.

A version of this article was originally published on the site of the International Campaign for Human Rights in Iran. [1]

On the 71st day of her husband's hunger strike, Golrokh Ebrahimi Iraee [2] was granted a short furlough [3] from prison and promised a review of her sentence [4] by the Judiciary. Iraee was charged after Iran's Revolutionary Guards raided her home, looking for evidence against her civil rights activist husband, Arash Sadeghi, who has been in prison since March 2016. Sadeghi began his hunger strike in protest of his wife's arrest.

“The [Tehran] Assistant Prosecutor Mr. Hajilou accepted that my case was wrongfully handled, but said it would take time for it to be reviewed,” Iraee told the Campaign for Human Rights in Iran on the first day of her temporary leave from Evin Prison on January 3, 2017.

“The law says that when a wrongful ruling is made, the accused should go free until a new ruling is issued. I was offered furlough even though I didn’t ask for it. But Arash was in critical condition, so I agreed to take it.”

Iraee was sentenced to six years in prison in March 2016 for “insulting the sacred” and “propaganda against the state” for writing a fantastical story she never published and for a “few” of her Facebook posts. The story, which she had written in a notebook that was later confiscated during a raid of her home by the Revolutionary Guards, is about an enraged woman who burns the Quran after watching a film about stoning in Iran.

She was released on furlough after posting 500 million tomans (approximately US $155,000) bail. She told the Campaign that Branch 33 of the Supreme Court has been appointed to review her case.

“I have been given a four-day leave and have to go back to prison on January 7,” she said. “But I should be allowed to be free until they review my case because the judiciary has agreed my sentence was wrongfully issued.”

Public concern for the endangered life of Sadeghi—who is serving a 15-year prison sentence for his peaceful activism especially on social media [5]—appears to have forced the judiciary to retreat from its usual hardline stance.

Iraee told the Campaign for Human Rights in Iran that after going 71 days with no food, her husband could barely walk, was vomiting blood, and suffering from serious kidney, intestinal and lung problems.

On January 3, she told the Campaign: “The prosecutor’s office has issued a permit allowing Arash to be transferred to the hospital, but as of 8 p.m. tonight, he’s still in prison being looked after by the clinic staff, even though he needs immediate hospitalization,” she said.

“When I visited Arash in prison, I asked him to end his hunger strike,” she added. “I was worried for his health, but I left the decision to him… I tried not to let emotions get in the way of what he was trying to accomplish.”

On December 20, 2016, the #SaveArash [6] hashtag became a trending topic [5] on Twitter, with more than half a million participants expressing serious concern and support for Sadeghi’s plight.

Sadeghi was arrested with his wife and friends Navid Kamran [7] and Behnam Mousivand on September 6, 2014, at the couple’s stationary store in Tehran by agents of the Revolutionary Guards’ Sarallah headquarters.

Sadeghi was charged with “assembly and collusion against national security,” “propaganda against the state,” “spreading lies in cyberspace,” and “insulting the founder of the Islamic Republic” for his peaceful civil rights activism. He began serving his 15-year prison sentence [8] in June 2016.

Read further reporting on the matter in ICHRI and Global Voices here [5] and here [9].