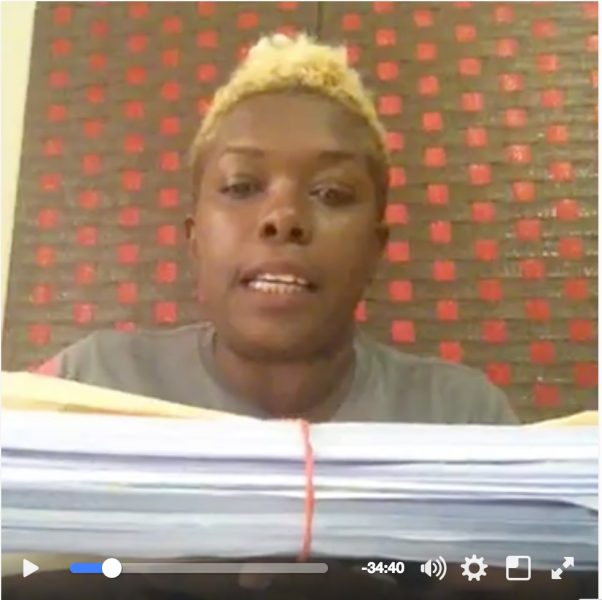 Rhoda Bharath, showing netizens the stack of documents relating to the alleged misconduct in public office on the part of Trinidad and Tobago's president. Screenshot taken from Bharath's Facebook Live session of January 1, 2017.

Rhoda Bharath, the university lecturer who has made it her mission to get the bottom of a controversial housing allowance granted to the country's president, began 2017 by posting a Facebook Live video updating netizens on the latest developments.

While there are several aspects to Bharath's argument as to why Trinidad and Tobago's president, Anthony Carmona, should be investigated for alleged impropriety, she has homed in on the issue of the housing allowance because she believes that there is “a strong case” there. Carmona received TT $28,000 (approximately US $4,180) per month from July 2013 until May 2015, while living in state housing. All guidelines on the matter clearly state that a president may be the recipient of state accommodation, or a housing allowance to afford him suitable housing — not both.

In reviewing the documents, a UK-based senior attorney advised that there were grounds for a criminal investigation into misconduct in public office on the part of the president, his secretary at the time and the then chief personnel officer, but Bharath's request for a probe has not yet been acknowledged by the police. Her attorney, Justin Phelps, has sent correspondence to two acting chiefs of police on four occasions since Bharath's press conference on October 27, 2016.

The plot thickens, however. On September 28, 2016, President Carmona publicly stated that he commissioned a consultant firm to do a report (the results of which apparently support the decision to grant him the housing allowance), that the Salaries Review Commission (SRC) authorised the payment based on that report, and that the report itself is lodged with the auditor general's office.

The SRC has since made it clear that it “has not been involved in the alleged decision” to grant the allowance — a stance which contradicts the president's assertions that the chairperson and members of the SRC, through the chief personnel officer, decided that due to the “deplorable conditions” of the state housing he was afforded, the allowance would be given.

The SRC also insisted that it had never seen the consultant's report that the president allegedly commissioned. In fact, in a letter dated July 9, 2013, the then chief personnel officer approved a housing allowance of TT $15,450 (approximately US $2,305) “only during the period in which [the president] occupies such temporary accommodation”, even though “as a principle, where an office holder is provided with accommodation by the State, a Housing Allowance is not payable for an period during which he/she is provided with such accommodation.” The figure was later increased retroactively to the $28,000 per month, but no correspondence to date references an independent consultant's report.

Bharath says she requested a copy of the report from the auditor general's office, but was told that because the subject matter is linked to the president, that office is exempt from responding to Freedom of Information queries. It is a curious position, and one which Bharath believes is a dangerous precedent. While the office is charged with the responsibility of overseeing spending in the public service, the auditor general is appointed by the president.

Tracking down that report is a key issue for Bharath, as she says its contents — and the date on which it was issued — are critical for the country:

What is the date of the report, because if the [chief personnel officer] gave permission on July 9, was the report done before or after [Carmona] got the allowance? And, at this stage, because I feel I cannot trust you, Mr. President, how much did that report cost us? What were its parameters?

Bharath maintains that to date, no one with the authority to grant the housing allowance that she has spoken to has seen this report, and spelt out what this means to the citizens of the country:

What the president did was remain in housing that was beneath his standards and put the money in his pocket. Six hundred thousand dollars that never gets taxed and gets put directly into his pocket. That is the kind of foolishness that we have going on here.

While there are a few gatekeepers intended to hold the president to account — the accounting officer at President's House, the auditor general, the police — all of them, in Bharath's opinion, are not making an effort to do so. She called on the media and social media users to put on the pressure. She also noted that civil society and even the country's prime minister, Dr. Keith Rowley, have been quiet, but conceded that it would probably be premature for Rowley to comment on the matter until the police launch an investigation:

So again I’m going to ask why is the [chief of police] not responding?

We have to take this seriously, Trinidad and Tobago — we cannot allow silence and apathy to take us over. […]

We must insist that he be held to account because if he can get away with taking money that does not belong to him, then we have no right locking up people for petty crime.

There has been no further comment on the issue from the Office of the President.