The Best of Latin American Info-Activism in 2016 (Part 1) 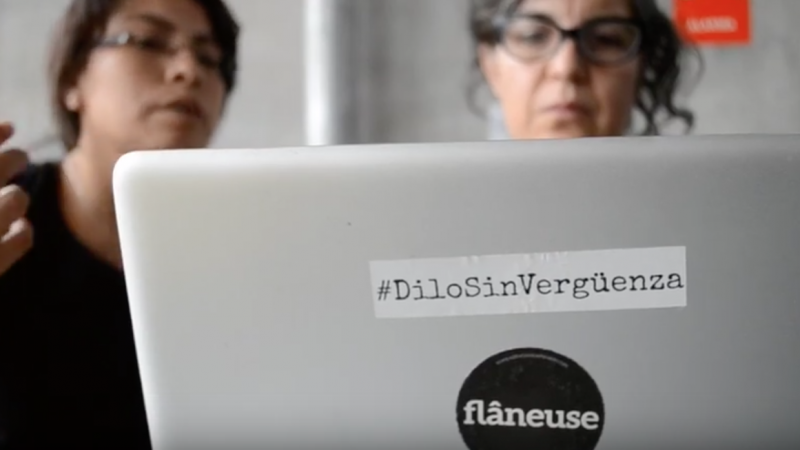 “With each #Editatona (or female edit-a-thon), we reverse the gender gap in the world's largest collaborative knowledge site.” Screen shot from a video presentation of the “Editatona on #WomenWriters” which took place on September 24th in Mexico.

The following is the first part of an edited re-post of a piece written by an organization called SocialTIC and published originally on its website, which Global Voices has published with the original authors’ permission.

With a complicated and controversial 2016 coming to a close, SocialTIC reflected on the past year and made a list of Latin American projects that had the most influence on civic and technological levels (as they did in 2013, 2014, and 2015). Many lessons were learned, but the focal point remained the same: the need to empower social change through the strategic use of information and technology.

The best campaigns with regional influence

2016 must be considered a milestone in the history of the fight for equality and security for women in Latin America. Demonstrations with thousands of women made waves in the streets and in the hearts of many, from one end of the region to the other, as they shouted #NotOneLess, #DoNotStaySilent, #WeWantThemAlive, #WeWantUsAlive, or hashtags of the dates for each of the marches.

Every collective, organization, or group of women, regardless of their ideological and activist background, is fighting every day to be visible and stop the violence, inequality, and injustice that is experienced daily in Latin America. #MyFirstHarassment unmasked evidence of harassment of young girls not only in Mexico, but in the entire region. The medium-term challenge of advocacy, both on the individual and collective levels, is to have just, peaceful, and enabling societies for all women and girls, where there is no impunity for aggressors, trolls, or criminals.

It is also worth noting the continuous impact that organizations specializing in digital rights, such as R3D, Fundación Karisma, ONG Derechos Digitales, Hiperderecho, TEDIC, and others have had. Through their constant activity and mini-campaigns, they are building knowledge, making risks known, and generating a culture on human rights in digital spaces. This effort goes beyond a single campaign. The ultimate objective is for all users to have full awareness of and civic empowerment in their digital environment.

This section ends in Central America, where activism is marked by attacks, injustices, and bloodshed. This year, we yelled #JusticeForBerta after the cowardly murder of a great defender of human rights and the environment in Honduras. Resistance, struggle, and constant attentiveness is quite difficult to maintain in the public opinion, making the lives of activists and foreign problems alien to citizens of big cities. Joint efforts in communication and visibility, like those that came about after Berta's murder or the political prisoners in Guatemala are essential to the continual defense of the people, the land, and the culture.

#JusticeForBerta 9 months after the assassination of #BertaCáceres and her fight for a just world continues. We demand a just and impartial investigation.

The year closed with a creative project by Coding Rights called ChupaDatos, which uses its website and performances to make us reflect on what and how much personal data is sucked up by the devices and applications we use daily. After discovering ChupaDatos, you'll surely ask yourself what data your city, house, body, and purse suck up from you.

We'll mention the expressions of graphic illustrations by a project called El Surtidor in Paraguay and the Nacho Progre comic from Mexico, both of which are using design to inform, sensitize, and creatively and aesthetically build their followers on social networks. Whether it be bringing causes to light, struggles for digital rights, or macho behavior, initiatives like these demonstrate the power of simple, appealing, and strategic communication.

Other projects worked directly with action in the streets, with the goal of contributing to the complex process of citizen building. With #PeacetotheStreets in Colombia, young people brought about vibrant actions of visibility, information, and demands regarding the peace process that sought to end over 50 years of internal strife and whose agreements were rejected in the referendum that sought to ratify them. In Guatemala, the youth of the #JusticeNOW movement organized events and spaces for citizen dialogue, which sought to encourage the adoption of reforms in the country. Many of the discussions focused on fighting corruption and on citizen participation inspired by the movements that led to President Otto Pérez Molina's resignation.

2016 also saw different pedagogical efforts that looked to bring digital issues to physical spaces. Resources like To the Streets Fearlessly and Anti-Vigilance Safe empower educators that hold workshops or street promotions to discuss the risks present in demonstrations and digital spaces. And to continue encouraging those of us in the region, their website is now available here: onlinoffline.org

The best project linking the government and citizens

This category was especially complicated this year. Despite tendencies towards and discourse on openness in many Latin American countries, there are only a few projects that truly link citizens and the government. This category not only seeks to highlight innovation, but also the political will of those who herald governmental openness.

Thus, only one project stood out because of the potential and hope it would have for Mexico if it were to continue and be carried out in a participatory, profound, and constant way. The Official Publication of Chihuahua is a platform driven by Fundar, along with the Government of Chihuahua, which makes public spending transparent in the state's media. If this proactive action of transparency continues, unlike what is happening in the rest of the country's governmental structures, the citizens would gain clarity on the relationship between the government and the press.