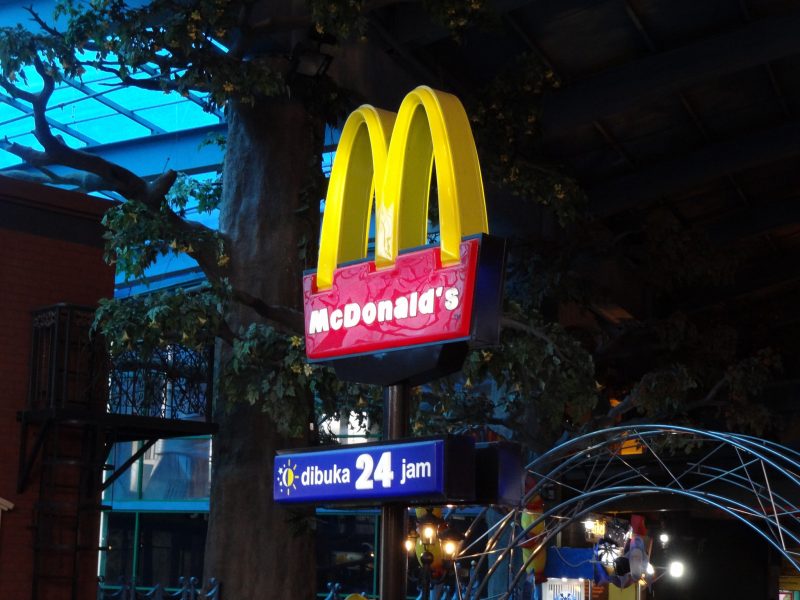 McDonald's in Malaysia. Photo from the Flickr page of Martin Lewison, CC License

The decision of the Malaysian office of fast food giant McDonald’s to ban non-halal cakes inside its premises has been criticized for allegedly promoting an intolerant and extreme version of Islam.

Malaysia has a predominantly Malay Muslim population, although the state advocates the unity of diverse races and ethnic groups.

Halal certification in Malaysia means that a food product has been endorsed by an accredited religious authority as meeting Islamic standards.

This notice in a McDonald’s outlet about the ban on non-halal cakes was widely shared on social media:

McDonald’s confirmed that it is banning non-halal birthday cakes in compliance with the directive of the Department of Islamic Development Malaysia (Jakim):

As a company that offers only halal-certified products, we implement a ‘no outside food policy’ to ensure that all products served and consumed at our restaurants are halal.

In the case of ‘birthday parties’ at McDonald’s, we have made an exception to allow customers to bring in their own birthday cakes as part of their celebration, provided that the cakes are certified halal.

Many described McDonald’s policy as unnecessary and impractical. Mariam Mokhtar, a columnist of Free Malaysia Today, explained why so many people were disappointed:

There are mothers who bake their children’s birthday cakes for parties at McDonald’s. And there are those who order them from people like me, who enjoy baking for friends.

So what are parents to do if McDonald’s wants them to provide a halal certificate for one of my cakes?

Has halal political correctness gone overboard? Will we one day see moral police invading houses to ensure that we are eating only halal food? When will common sense prevail?

Roziah Daud, who runs an online cake store, insisted that the ingredients used in baking a cake are generally halal items such as flour, eggs and sugar:

This should not even be a problem. At times, when you go to other ordinary cafes, they don't ask you where your cake comes from and whether it is halal or not. Stop vetting people's privacy! If the cake is for their own consumption, how could you impose a rule like this?

Meanwhile, the NGO Center for a Better Tomorrow (Cenbet) issued a statement urging Jakim to reconsider its strict enforcement of rules regarding halal certification:

While eateries have the right to ban patrons from bringing in outside food, the decision should be based on commercial considerations and not whether the food is halal-certified or not. In this respect, Jakim should not overstep its boundary by accrediting ‘premises’ instead of ‘food’. It should also not subject food operators to white terror. Doing so would be an abuse of power.

There is no question about respecting Muslims’ dietary requirements. But we should not allow radical elements to hijack any religions for political ends.

The group warned that Jakim’s mandate could be abused to justify the state’s intrusion into the private lives of ordinary citizens:

…it will open the floodgates for more areas to be classified along halal-non halal lines such as public transportation, schools, housing areas and healthcare. This will only segregate the people along religious lines, especially at a time when there is a need to enhance unity in the face of rising extremism.

But a group which calls itself Young Professionals defended the right of Jakim to uphold the welfare of Muslims:

Cenbet’s demand that non-halal foodstuff be allowed on halal certified eateries and restaurants, for one, disrespects the sensitivities of Muslims who frequent such places, on the premise that they have been certified halal and thus are free from non-halal elements.

How is a better tomorrow achieved by lack of sensitivity for the differing dietary requirements of a particular given faith, in this instance, Islam?

McDonald's has already apologized for issuing the notice which offended many of its customers, but it also said that it will continue to enforce the ban as part of its commitment to offer halal food items.

This is not the first time that the issue of halal certification has grabbed public attention. Last October, a fast food company was questioned by authorities for offering ‘hotdogs’ on its menu.