‘Painting on Death': One Syrian Artist's Mission Under Siege in Douma 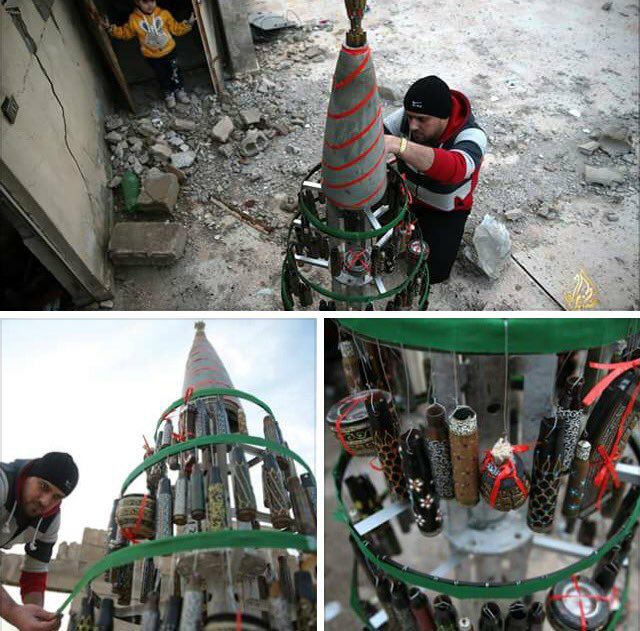 “We will stay here. Even if you scorch our land, we will stay in the cradle of civilizations to rebuild it again. We will make bridges from our bodies for the generations to cross to the future. We will build a new civilization from the ruins of our homes. We will make a Christmas tree from your shells and bombs, and light it for peace in our wounded Ghouta.”

These are the words of Akram Suwaidan, or Akram Abo Alfoz as he prefers to be called. Abo Alfoz is a 37-year-old artist from the city of Douma, in the Eastern Ghouta region of Syria.

Douma has been besieged by the Assad regime and its allies since the summer of 2014 (and partly besieged since October 2013) with an estimated 140,000 civilians still in the city out of a pre-war population of 500,000. In June 2016, some aid and food was allowed in, but the situation remains dangerous for residents, with one doctor telling the France-based international news agency AFP on October 3, 2016 that supplies were already running out.

This has left many feeling like there's no hope. But Abo Alfoz chose to fight that feeling. Doing his part to tell the world of what is happening in Eastern Ghouta, Abo Alfoz paints on death, almost literally. He transforms objects of war into pieces of art. 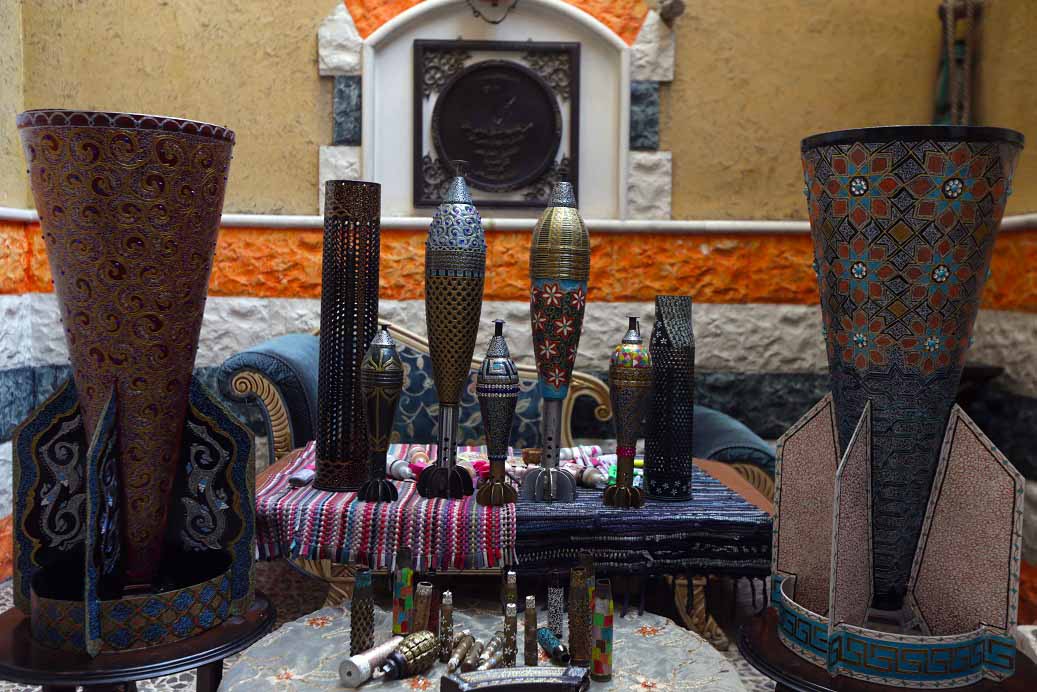 “Painting is a hobby that has been a companion since I was a child”, Abo Alfoz told Global Voices.

It stays with me even when I get busy with other things. Before the Syrian revolution, I carried my paint with me everywhere. When the revolution started, I initially distanced myself from my art. But when it became an armed revolution, I tried to revive my inner olive branch to draw the world's attention to our culture, thought, love for life and hope. 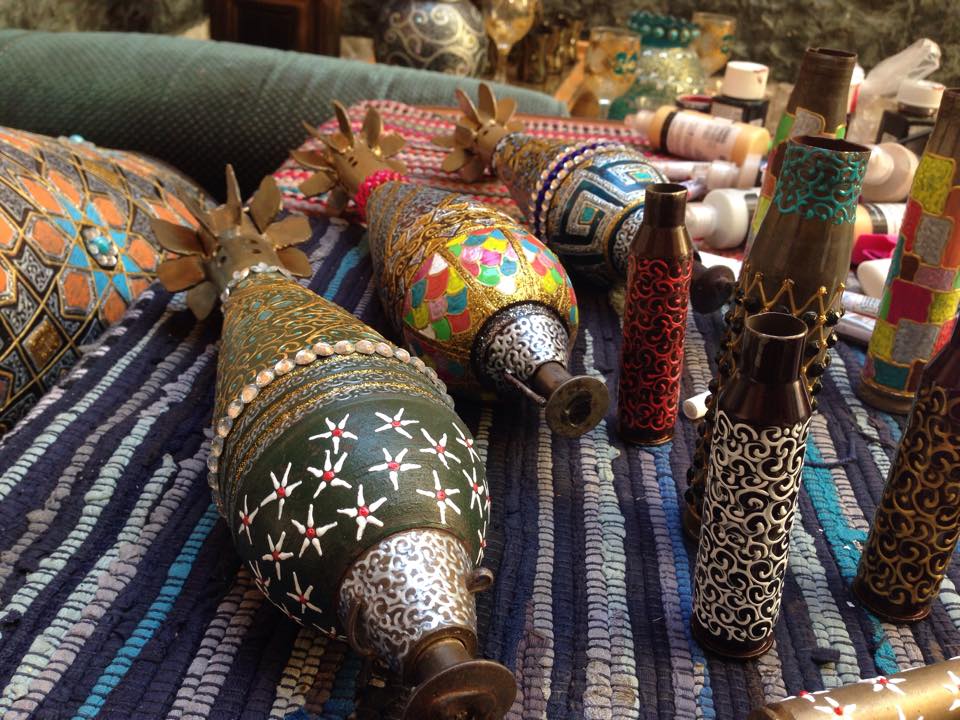 I wanted to draw the whole world's attention to what's happening in Syria in general and to my city Douma in particular. While the children of the world are waiting for their gifts and presents from Santa Claus our children are receiving their gifts from the Syrian Santa Claus in disguise, Russia, the Syrian regime, and Iran, and his sleigh in disguise of a Russian MIG aircraft. I wanted to show the entire world that we are people made to live and love life, and that our revolution is a revolution of thoughts and manners. 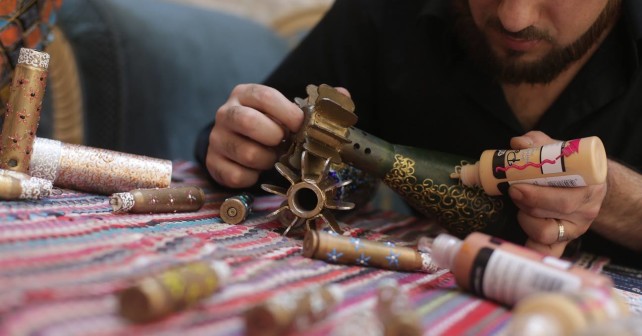 Global Voices asked if he could describe the current situation in Douma. He said:

The city of Duma was named the most dangerous city in the world in all aspects, the insane shelling by the regime and Russian air force claims the lives of many innocent people on a daily bases, beside the siege that has been ongoing since 4 years, and the power outage, water scarcity and communication outages in the city since that time in addition to becoming constantly psychologically overwhelmed, this feeling of psychological exhaustion that accompanies us through the difficulty of living. 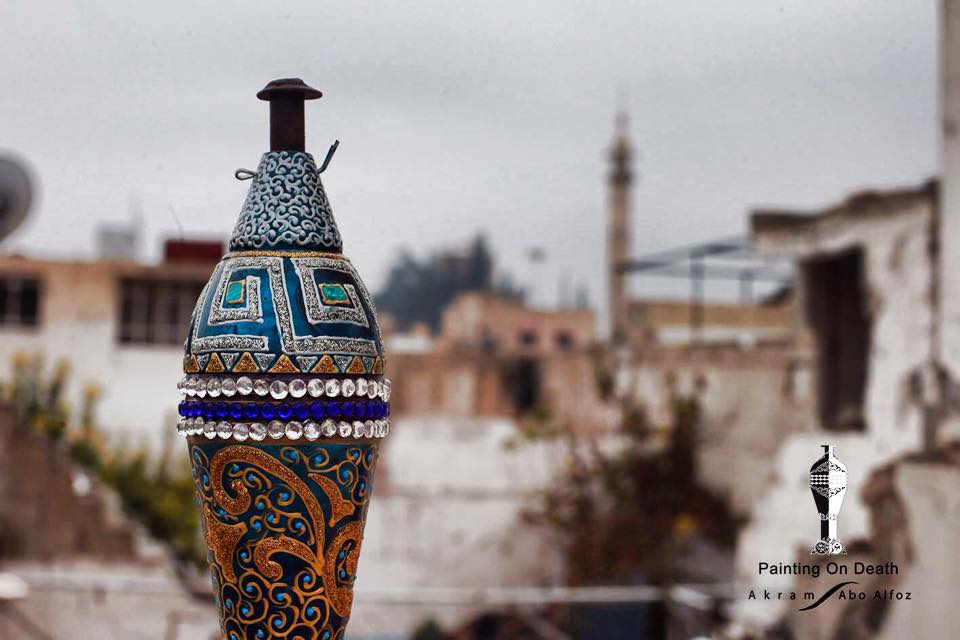 Some of Abo Alfoz's work. Used with permission.

The situation in Douma is indeed dire. With the fall of Aleppo to the Syrian regime being finalized, residents of Douma and the wider Eastern Ghouta region fear that they will be next. According to AFP:

Activists said Douma residents were concerned that Monday's [October 3] air strikes were a prelude to a ground offensive much like the army's current push to take all of Aleppo city.

That fear was repeated by residents speaking with US-based alternative media outlet Vice as recently as December 27, 2016. Tariq (not his real name), an English teacher in Douma, told Vice:

People are very afraid of obligatory evacuation, like what happened in other parts of the Damascus suburbs and now Aleppo.

The Siege Watch project reported on the humanitarian emergency situation in Douma with the following:

The neighborhood of Douma was subjected to extremely high levels of attack from pro-government forces during the August – October 2016 reporting period, leading to a deterioration of the already dire humanitarian situation. On 10 September Douma was targeted with 10 airstrikes in one day. The next day on 11 September the town reported non-stop attacks with cluster munitions, one of which struck a center where children were playing. Incendiary and cluster munition use are frequently reported.

Asked if he had a ‘message to the world’, Abo Alfoz replied: