In the Social Media Age, How Should Jamaica’s Head of Government Communicate? 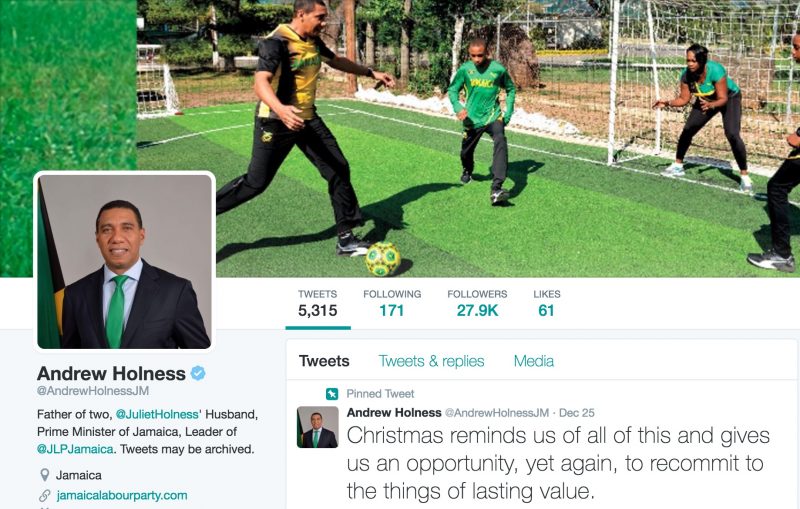 Just before Christmas, the Press Association of Jamaica (PAJ) issued a statement, urging Prime Minister Andrew Holness to hold a press conference — open to all media — to update the nation on various issues. In a press release, PAJ President Dionne Jackson Miller acknowledged Holness’ interviews with select media houses — including her own — but would like to see him hold a full briefing as early as possible in the New Year, and from there on, at regular intervals.

But how often is too often, and where should the balance between traditional and social media lie?

When it comes to using social media tools, the country's general elections in February 2016 demonstrated how Holness — along with the Jamaica Labour Party, which he leads — left political rivals in the dust. Although social media reaches a limited — although influential — audience in Jamaica, the prime minister's Facebook page, which is updated three or four times each day, has close to 200,000 followers. His Twitter account has nearly 28,000 followers. Blogger and Internet activist Ingrid Riley notes that 1.1 million Jamaicans (a little under half of the population of close to 2.8 million) currently use Facebook and just under 400,000 are on Instagram.

So is there a need for regular and wider outreach via traditional media? The journalism fraternity certainly thinks so, while the Jamaican public (those commenting online, that is) appears more divided.

Robinson: The PM runs a dangerous risk by selecting specific Journalists for a Press briefing. The Perception (from many) is “bias”#RJRBTH

On the same radio show, civil society activist Carol Narcisse noted that most Jamaicans in rural areas do not have Internet access:

@CarolNarcisse: What about Maas Tom in Gimmi me bit who is not on social media? Gov. has a responsibility to communicate with them2#RJRBTH

An editorial in the the Jamaica Observer newspaper suggested quarterly briefings, comparing the prime minister's availability with that of his predecessors and adding:

It seems to this newspaper that the hosting of regular press briefings must be an essential element in the overarching practice of transparency and accountability so central to good governance, to which Mr Holness has pledged.

PM Holness is a media savvy leader who's accessible. Having 1/4ly press briefings is a best practice in improving governance. Over to u PM!

Was the PAJ's demand warranted?

Some non-journalists found the tone of the PAJ's demand a touch belligerent:

@cliffnationwide @Petchary The “demand” may be consistent but the bellicosity is new. And why are things at the “demand” stage anyway?

We want regular press conferences for what? 15 second sound bites, cuz that's all the individual media houses going to be getting

Television journalist Archibald Gordon admonished those who did not see the need for press conferences:

You're not everyone. If journalists are guilty of ignoring SM you're guilty of pretending we're all on twitter. Also arrogant and naive https://t.co/eODIgNXabQ

The PAJ President is consistent in demanding greater access to PMs. Debate the issue without the personal attacks. We've got to do better.

Yolande Gyles Levy agreed with other journalists that the prime minister's social media presence was laudable, but asked:

Does the PM do one on one iviews with media? Yes. Does he need to do more press conferences with all media? Definitely. #GetOverUnnuSelves

And yes all the PMs social media presence is great! Love it! But it does not replace the all important open Press Conferences.

‘People no longer want the media to write the script’

However, some non-journalists raised the issue of perceived bias in the traditional media:

.@BobbyPick2 @KesiAGardner do you know how many times I've had to take to social media to get the true ‘story'? Traditional media is dying!

Another Twitter user suggested traditional media is lacking in some areas:

PAJ members fi go do some heavy hitting investigative journalism and solidly researched stories. That's how they can keep relevant.

people no longer want the media to write the script for them… https://t.co/LYx9FelDmx

The political landscape has changed significantly in Jamaica in the past couple of years. Social media and digital marketing in general have helped to transform it, as politicians use it as a tool to engage their voters. We saw this in the last general election. JLP [Jamaica Labour Party, the country's governing party] was very targeted in its approach, using online digital ads to reach female voters between the ages of 24-35 years old and mobilizing its MPs to use their social media accounts to inform and participate with their audiences.

Comparing the Jamaican prime minister's situation with the example of US President-elect Donald Trump, himself an avid Twitter user who avoids traditional media, Gardner noted:

[Trump] uses Twitter as a direct line to his now 17 million followers, side-stepping traditional media, sharing his unfiltered personal views. His influence is such that traditional media comments on his every tweet, with bated breath. Instead of the news reporting their views on a topic as given to them with privilege (either through press release or press conference), they are now forced to share the news direct from the source and then try to make sense of it.

Jamaica’s Prime Minister, Andrew Holness and many other heads of state, use social media to converse with their followers. The PAJ’s desire to have more access to the Prime Minister through more press conferences, is their way of making sure that they maintain access to this privilege.

Nevertheless, other Jamaicans on social media supported the PAJ's stance:

@Petchary @jahmekyagyal journalists probe, get depth and balance. SM lacks both and is more PR.

‘The future of the press relies on’ social media

One point that was raised during the online discussion was that the PAJ had repeatedly complained about the unavailability of Holness’ predecessor, Portia Simpson Miller, during her four-year tenure –something which irked both journalists and the general public.

The issue of political leaders tweeting as opposed to holding press conferences is, of course, not only relevant to Jamaica at this point. As the discussion continued, US radio broadcaster NPR posted a timely tweet:

It has been 145 days since Donald Trump's last press conference. @tamarakeithNPR explains why that matters https://t.co/DD8JWuOlcP pic.twitter.com/dD7DiafGbv

Nevertheless, Kesi Gardner stressed the need for balance — and a different approach:

As a communications practitioner, I say integrated approach is still the best way to reach your audience. Using traditional media channels in conjunction with social media and PR is still important to building awareness…

But as someone who saw first-hand how biased the media can be, I say that social media will force the press to re-evaluate their model for how they approach reporting. News will have to become much more objective and integrated with social media. The future of the press relies on it.

While the prime minister has acknowledged the PAJ's request, no press conference date has yet been announced by his office. Perhaps this might happen next week when Jamaicans will have returned from the Christmas break. Meanwhile, the “traditional vs social media” debate is likely to continue.