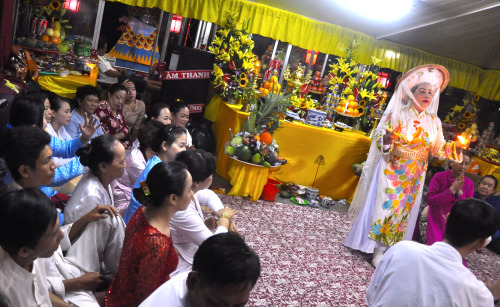 This article by Jenny Lý is from Loa, an independent news website and podcast that broadcasts stories about Vietnam. It is republished by Global Voices as part of a content-sharing agreement.

Vietnam’s worship of the Mother Goddesses has received UNESCO recognition as an “intangible cultural heritage of humanity.”

The UN Intergovernmental Committee made the official announcement at the 11th Convention for the Safeguarding of Intangible Cultural Heritage held in Addis-Ababa, Ethiopia, from Nov. 28 to Dec. 2, 2016.

The news is cause for celebration in Vietnam, particularly among the ancestor-worship community and scholars who have spent years advocating for UNESCO recognition. Việt Nam originally submitted the dossier in 2015 for “practices related to the Viet beliefs in the Mother Goddesses of Three Realms,” but the recognition was delayed until this year.

The worship of the Mother Goddesses in Vietnam showcases Vietnamese cultural heritage and the people’s spiritual needs in honoring their ancestors to safeguard a prosperous life. The spiritual practice expresses piety toward the mother figure, which reflects Vietnam’s once matriarchal system.

UNESCO states that the belief “provides a basis for social relations connecting members of participating communities.” The worshipping of the Mother Goddesses also contributes to the “appreciation of women and their roles in society.” 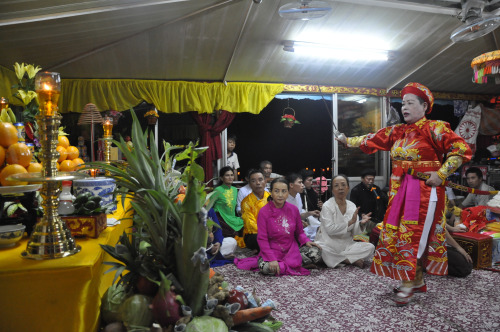 Temple delegation worship at a temple in Huế during the Điện Hòn Chén festival in August 2016. Loa / Jenny Lý

The Mother Goddesses of the Three Realms represent deities from heaven, water, and mountains and forests, and have been affiliated with both real, historical figures, as well as mythical ones.

One key practice in the Mother Goddesses worship is lên đồng, a ritual in which the practitioner goes into a trance and assumes a particular deity in costume and dance to honor the Mother Goddesses. These practices are carried out daily in local ceremonies, as well as at larger festivals and pilgrimages throughout the year.

Learn more about the Mother Goddesses worship by listening to the podcast below: