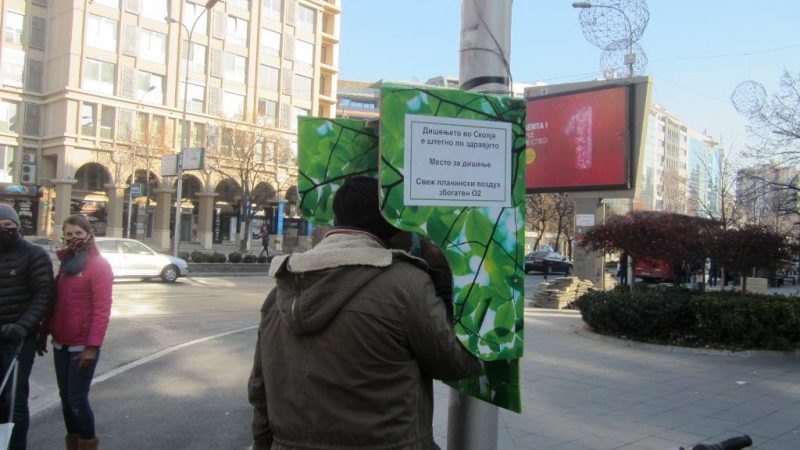 “Breathing in Skopje harms your health” reads the sign on the “Mountain air booth” in Skopje. Photo by Urban Art Actions, used with permission.

The winter “smog season” has arrived in the Balkans. In Macedonia, faced with high levels of pollution, citizens and activists are turning to parody and protest in order to force the authorities to do their job.

In the grand tradition of guerrilla protest art, the group Urban Art Actions offered a satirical commentary on the ongoing problem by providing residents of the capital city Skopje a breath of “fresh mountain air” with “breathing booths”:

As a sign of support for the efforts of citizens and environmental organizations to solve the enormous problem of pollution in Skopje, the team named Urban Art Actions posted two breathing booths with mountain air in Skopje. They are located at Bunjakovec and near the green market in Aerodrom. With this action, we want to help citizens and let them take a breath of fresh air. The action will continue in the following days by bringing new fresh air from nearby mountains. After Skopje, the action will be conducted in Tetovo.

The main causes of air pollution in Macedonia include smoke from burning wood and rubber by increasingly an impoverished population which cannot afford central or electric heating, smoke from factories without filters, dust from construction sites and quarries, and exhaust from motor vehicles.

The Macedonian capital Skopje is especially prone to smog in winter due to inadequate urban planning. The local government had been issuing recommendations for vulnerable people to stay indoors, without providing concrete measures that support children or pregnant women who need to go to school or work. Citizens’ demands for gas masks has noticeably increased.

In the polluted area of Tetovo, a glimmer of hope was provided just before the recent elections in early December. After several years of delaying, the government enforced the law and temporarily closed the metallurgical complex Jugohrom, pending the installation of air filters. 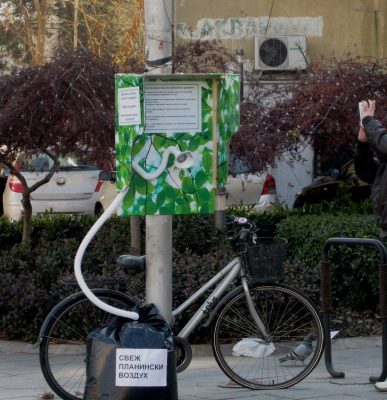 Residents of Skopje can take a breath of “fresh mountain air” through the breathing booths.

A comparison of average pollution levels in the area between November and December 2015 and 2016 showed that the pollution dramatically dropped by 40-50%. However, the general level of pollution there remains alarming, as the other pollution factors had not been tackled.

A recent meeting of the mayors of 17 municipalities comprising Skopje City metropolitan area and the nearby villages, organized by Skopje Mayor Koce Trajanovski, did not result in any overreaching measures, like the transport restrictions instituted few days ago in the Bosnian capital of Sarajevo.

“Urgent meeting of 18 mayors about the pollution in Skopje.”
They came to the meeting with 18 different cars.

Conclusions that came out of the meeting include the introduction of steeper fines for people who burn coal or the remains of furniture in their homes, and a pledge by Skopje's mayor to ask the new government, whenever it is formed, to make a new tender for the creation of infrastructure for using natural gas-powered heating.

On social media, citizens have voiced discontent over the perceived disconnect between the low quality of life many Macedonians experience and the government's priorities (as well as its ideological obsession with ancient history).

The most polluted air in Europe must not be a problem for a people with the DNA of warriors from antiquity.

And citizens of Skopje have announced a public protest on December 28, demanding that the authorities start taking serious measures against the pollution.