Homeless People Outside Tehran Are Taking Refuge in Empty Graves 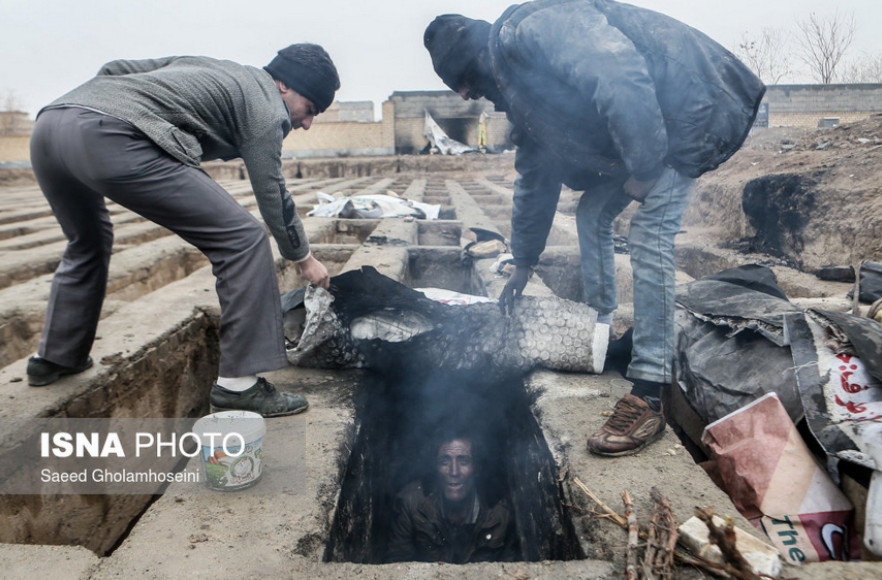 One of the viral images of Iran's homeless population taking refuge in graves outside of Tehran. Image by Saeed Gholamhosseini for ISNA news. Published with rights to redistribute.

Images of homeless people in Iran taking refuge in empty graves outside of Tehran have shocked Persian social-media users, leading to outrage and calls for the government to intervene.

The public uproar intensified after the newspaper Shahrvand, a publication believed to be close to the reformist government of Hassan Rouhani, ran a feature called “Life in the Grave.”

Since the story broke, Iranians have been discussing it heatedly online. One anonymous Twitter user called “Maktoub” quoted an ironic line by the founder of the Islamic Republic,  Ayatollah Khomeini, saying, “I prefer the ‘slum dwellers’ to the ‘palace dwellers.'” The irony of this statement was shown in the juxtoposition of an image of a homeless man living in a grave, with the image of the palace-like shrine, built with government money, that houses his tomb.

I prefer the ‘slum dwellers’ to the ‘palace dwellers’ (Imam Khomeini)

An Instagram post by Iranian artist and cartoonist Bozorgmehr Hosseinpour (seen below) has garnered significant attention on Persian social media, as well. In addition to some controversial remarks about sterilizing the homeless to prevent them from bearing children, Hosseinpour expressed his frustration that no one paid attention to Iran's ongoing homeless problem, until the viral grave images were published.

Stop! Instead of wasting your time on senseless feelings which gets you nowhere, and instead of shallow and unwise words…let's think of some good solutions. During these bitter days, we have to take off some of the weight from the homeless children who are lost and weak…those who are sick and enter the world with sickness and misfortune. We have to explain the matter with empathy and kindness and educate them on the future of their own children. These inhabitants of boxes (karton khab-ha) should be stopped from having children so we can prevent future populations of these displaced people of boxes. We have to order them to stop reproducing more homeless children who will grow up in the same state of poverty as their parents. Naturally this does not mean that we should not help these people in these unfortunate states. This has been a issue for years that sees these folks living under bridges, in sewers and parks, but these days they are only gaining attention because of the images of them sleeping in graves. If they had similarly been sleeping in the sewer or under the bridge no one would have any news of these people. Thank god that this was the turn of events that people are now aware of this population and might be able to do something to their lives and that of their children. Those that are now screaming for their lives, where have you been until now? If these poor people were not sleeping in graves you wouldn't probably know about them. And now what do you think will happen? They will throw them out of the graveyards… #sleepers_of_boxes

Oscar winning Iranian filmmaker Asghar Farhadi was another notable voice to cry out in outrage at the notion that Iranians had to take refuge in graves to survive the winter. In an open letter penned to President Hassan Rouhani, he exclaimed he was ashamed of his country.

The President was quick to respond, agreeing with Farhadi that these conditions are unacceptable.

Rouhani in response to the letter of Farhadi: Sleeping in graves is not acceptable #Iran #graveyards #Rouhani

Other members of the government, such as the governor of the Province of Tehran (the viral images were taken in the surrounding areas of the city of Tehran), say homelessness is part of a wider problem with drug addiction.

There has been some concern that the public's sudden attention to the grave sites will expose these individuals to government abuse, as officials try to remove them in order to resolve the “graveyard” problem superficially.

As reported by BBC Persian, Hashemi claims that many of the individuals found living in homeless conditions refuse to go to rehabilitation facilities for their addictions. The governor also insisted that no homeless persons are being abused by the government.