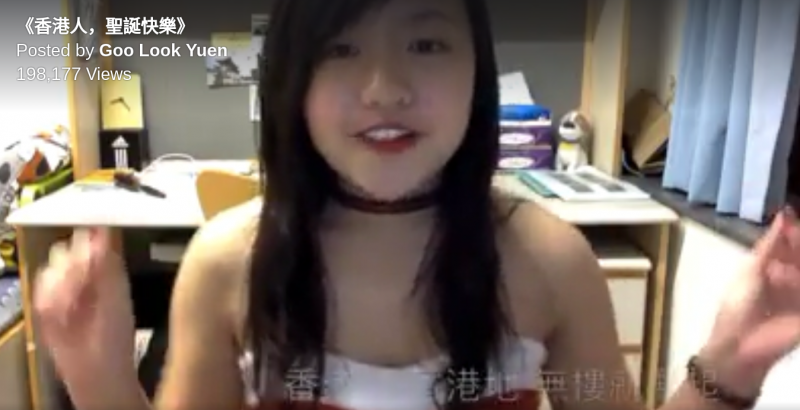 A set of Christmas Songs has gone viral on Hong Kong social media during the holiday season.

Shared more than 1,470 times and viewed more than 190,000 times, the songs are no ordinary Christmas carols. The lyrics are rewritten with wit to capture major social and political sagas that have played out recently in Hong Kong.

The singer is Emilia Wong, a local university student whose Facebook page’s banner says, “I am a Hong Konger, and I advocate Hong Kong independence.” That's a bold statement aimed at Chinese authorities, who have vowed to quash an independence movement in Hong Kong, which is a special administrative region of the mainland.

The songs were published as a collection called “Hong Konger, Merry Christmas” and composed of five popular Christmas tunes: Jingle Bells, Silent Night, We Wish You a Merry Christmas, Twelve Days of Christmas and Rudolph the Red-Nosed Reindeer. Full of dark humor, these five songs offer a somewhat lighthearted roundup of what happened in Hong Kong in 2016.

The first song is a reimagined version of Jingle Bells. Instead of lyrics that speak of a fun ride in a one-horse open sleigh through the snow, it talks about the politics of land development in Hong Kong surrounding the Wang Chau housing controversy.

The government promised to build 17,000 public housing units at Wang Chau in Hong Kong's New Territories in 2012. The piece of land is currently a huge temporary parking area for containers and vehicles operated by rural elites and members of triad, or organized crime, organizations.

Then, the city's Chief Executive Leung Chung Ying conducted off-the-record “soft lobbying” with the rural communities. Afterward, the government’s development plan was downsized to 4,000 public housing units while the rest of the land was destined to the construction of private apartments and rural small house units. While it is unusual for the chief executive to lead a development lobby, some suspected that the change of plan was made in exchange for the rural communities’ support in the upcoming chief executive election.

In past years, the Hong Kong government has said there is no land left to build more housing, and therefore wants to exploit public areas and country parks for development purposes. But the Wang Chau controversy revealed that the government would rather harm public interest than confront the powerful and privileged.

See how the saga is retold to the tune of Jingle Bells:

Silent night, holy night, the central government is the boss

The second song, Silent Night, is reworked to talk about not the birth of Jesus, but two Hong Kong lawmakers’ oath-taking controversy.

The two lawmakers, Leung Hung-Hang and Yau Wai-Ching, altered their inauguration oath’s wording, pledging allegiance to “the Hong Kong nation” and calling China “Shina” — a derogatory term used by Japan during the Second World War. The gesture was viewed as a rejection of the oath, which is outlined in Hong Kong's constitution, called the Basic Law. The steering committee of the People's Congress in Beijing stepped in to offer their interpretation of the law and to pressure local courts into disqualifying the two.

Here is the Hong Kong version of Silent Night:

We wish you a Merry Christmas, there isn't enough yuan

The third song, to the music of We Wish You A Merry Christmas, is about the cross-border smuggling controversy. People from mainland China believe that the quality of groceries, foods and drugs sold in Hong Kong are better. To cater to the huge market demand, many people make their living by carrying items by hand from Hong Kong across the border into China to sell them there.

Here are the new lyrics to We Wish You A Merry Christmas:

On the first day of Christmas my true love gave to me, a banned book from Causeway Bay

The fourth song is to the tune of Twelve Days of Christmas. It twists the lyrics, which normally speak of the ever increasing number of gifts the subject receives from their true love, to be about five booksellers from Hong Kong who were abducted by mainland police for selling banned books.

Here are the new lyrics:

The fifth song rewritten to the tune of Rudolph the Red-Nosed Reindeer, usually about one of Santa Claus's reindeer, is about the upcoming election for the chief executive, the top government position in Hong Kong.

Currently there are four potential candidates:

1. Regina Ip, a lawmaker and a former top government official responsible for preparing the enactment of a national security law in accordance with article 23 in the Basic Law. She resigned from the government after a huge rally against the legislation in 2003;

2. Woo Kwok-hing, a retired judge whose main agenda for running the race is to rebuild social harmony in Hong Kong;

3. Carrie Lam, current chief secretary with relatively high popularity. Many believe she is Beijing's “back up plan” after the current chief executive Leung Chun Ying declared that he would not join the race;

4. John Tsang, who handed in his resignation as the finance secretary before Christmas to prepare for the election race.

The latter two are considered to be the main rivals for the race. John Tsang is nicknamed “Pringles Pizza” by netizens because of his mustache.

Here is how the race is presented in song:

Pringles Pizza is proud of his mustache.
He is not good at math and gives the money to the wrong place.
He wants to join the chief executive race and everyone says he is good.
Regina Ip wants to compete, but Pringles Pizza wins with his popularity.
But Beijing has not given the green light to him yet. So he cannot run.
It said, “Carrie Lam is a good chief secretary and has more experience in the government.”
Pringles Pizza lost his job.
He talked to Judge Woo and hoped that he would beat Carrie Lam in the race.