Praise, Condemnation After Nigeria’s Offer to Grant Corruption Whistleblowers 5% of the Take 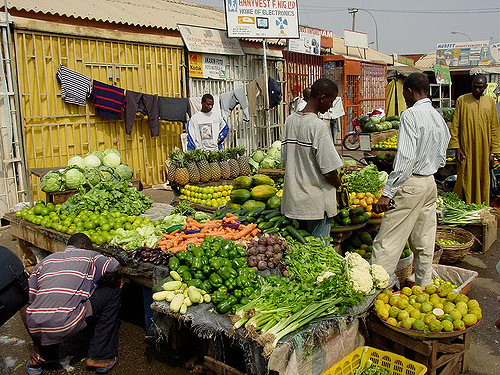 A local market in Abuja, Nigeria. Corruption affects the poor the most. Creative Commons image by Flickr user Jeff Attaway.

If there is a voluntary return of stolen or concealed public funds or assets on the account of the information provided, the whistleblower may be entitled to anywhere between 2.5 per cent (minimum) and 5 per cent (maximum) of the total amount recovered.

She also noted that the 5% reward to whistleblowers was to encourage the country's citizens to buy into the whistle blowers scheme.

To take advantage of this system, whistleblowers are expected to submit information via an online portal. In addition, individuals who make reports via the portal would be able to track the status of their reports online. Submissions by phone and email would also be accepted.

Global Financial Integrity estimates more than US$157 billion has left Nigeria through corruption in the past decade. The country is the 136th least corrupt country of 175 countries surveyed in the 2015 Corruption Perceptions Index of Transparency International.

However, while the new whistleblowers scheme and accompanying commission might seem like an incentive for Nigerian citizens to participate in the fight against financial and related crimes, the scheme has seen a range of reactions, from sarcasm and outright condemnation, to praise, online.

Omokri was referring to a scandal involving the use of  N270m (about US $850,000) to clear grass by the office of the Secretary to Government of the Federation (SGF).

Sandy Gold, a staunch social media commentator and supporter of Nigeria's major opposition party, the Peoples Democratic Party (PDP), had this to say:

Flash: Nigerian govt have finally adopted MMM to improve the lives of the citizens

‘MMM’ (Mavrodi Mondial Movement) as mentioned by Sandy Gold is a popular get-rich-quick scheme in Nigeria that promises 30% profit on any capital invested after a thirty-day cycle.

If you have a sugar daddy/mummy that has not been “providing help” and you have credible information on his/her ill gotten wealth. DM Me!

Remi Sonaiya, presidential candidate in the 2015 general elections in Nigeria, was displeased with the monetary rewards offered through the whistle blower scheme, and had the following questions:

2. Ephesians 5:11 encourages whistle blowing: Have nothing to do with the works of darkness, but rather, expose them. Why don't we do it?

3. Must everything bring a monetary reward? How about values like patriotism? Primarily, whistle blowers need protection…

Jackson Ude, a Nigerian journalist and political commentator based in New York, USA, tweeted with a dose of sarcasm:

PMB is about to fulfill his promise by employing every Nigerian on a part-time to work for EFCC, Police & DSS to earn 5% of looted funds!

PMB refers to reformist President Muhammadu Buhari, EFCC is the Economic and Financial Crimes Commision and DSS is the Department of State Services (State Security).

5% commission for reporting looted funds ? people will start snitching on their uncles ?

Some Nigerians like Yunus saw the scheme as a profitable business venture requiring no investment:

Kobo is a monetary unit of the Nigerian Naira, equal to one hundredth of one Naira.

Mr. Omojuwa, an analyst, brand influencer and self acclaimed certified ruffler of feathers, felt the 5% commission to whistleblowers could be too much depending on the size of the recovered loot or asset. He tweeted:

All in all, while most Nigerians are pessimistic about the way the scheme will be implemented, others are optimistic it will motivate ordinary citizens to bring endemic corruption to light. After all, there are precious few alternatives at the moment.