The news of the death of the most famous Yugoslav flight attendant, Vesna Vulović, on December 24 at the age of 67 was met with a mix of nostalgia and sadness in the countries of the former Yugoslav federation.

She passed away in her apartment in Belgrade. The news was published by public broadcaster Serbian Radio and Television and republished by many regional media outlets.

According to the Guinness Book of World Records, Vulović holds the record for highest fall survived without a parachute:

Vesna Vulovic (Yugoslavia) was 23 working as a Jugoslavenski Aerotransport hostess when she survived a fall from 10,160 m (33,333 ft) over Srbsk, Kamenice, Czechoslovakia (now Czech Republic), on 26 January 1972 after the DC-9 she was working aboard, blew up. She fell inside a section of tail unit. She was in hospital for 16 months after emerging from a 27 day coma and having many bones broken.

Officially, the explosion was result of terrorism, and the Yugoslav government blamed the Croatian separatist fascist movement Ustaše for placing the bomb. According to the Guardian, in 2009 two Czech investigative journalists claimed the plane had probably been mistakenly shot down by the Czechoslovakian air force. Allegedly, as part of the cover-up the secret police planted evidence indicating terrorism. This also incited doubts about the actual altitude.

As the sole survivor, Vulović become a celebrity and an optimistic symbol of luck, even though she didn't consider herself lucky — because if she were, she wouldn't had been in the accident in the first place. 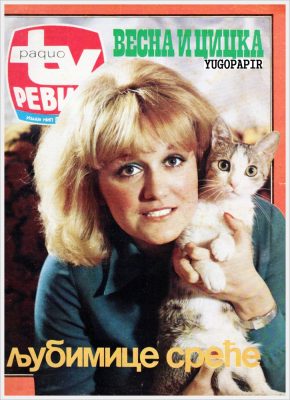 Front page of the April 1973 edition of RTV Revija, featuring Vesna Vulović and her cat Cicka as “Lady Luck's Favorites.” Scan used with permission by Yugopapir.

During the 1970s, Vulović served as an embodiment of the Yugoslav national myth of perseverance against all odds, echoing the official narrative of the nation's rebirth amid the horrors of World War II. A 1973 interview republished by the nonprofit digital archive Yugopapir likened her to her green-eyed cat Cicka, who also had a history of surviving falls from great heights. At the time, Vulović was still on a sick leave recovering from her injuries, but expressed her desire to continue working and lack of fear of flying.

In the interview, she also said she eagerly expected insurance money to service her debts because her parents had to sell the family car to foot the recovery bills. Thirty years later, in another interview, she said that the accident ruined their lives, as it did hers.

Her inclusion in the Guinness Book of World Records also kept her name in local headlines in the years that followed, as one of the few local record-holders.

Vesna Vulović on the front page [of the Guinness Book of World Records, 1980 edition], my personal copy. May she rest in peace.

Following recovery, Serbia-based Vulović continued her career as a flight attendant. After the breakup of Yugoslavia, she showed bravery again by publicly joining the protest movement against the dictatorship of Slobodan Milošević.

At the news of her death, some social media users shared the widespread sentiment that 2016 was a very bad year overall.