From time to time, we at Global Voices translate texts that appear on the Russian Internet, when writers capture something peculiar about the world, as seen by the denizens of the RuNet. Most of our content has to do with politics and social issues, but that’s not a rule, and today’s installment concerns the wild world of American hockey, as witnessed by Andrew Ivakhov, a young man from Ukraine now living in Los Angeles. He recently attended a matchup between the L.A. Kings and the Pittsburgh Penguins, where he was treated to a show he didn’t expect (or entirely enjoy).

This text first appeared in Russian on the website TJournal. It has been translated into English by Kevin Rothrock.

“Sports 2.0, Or How I Went to Hockey in the States”
By Andrew Ivakhov

This post won’t say anything new, if you’re anyone who’s ever been to hockey in the United States. Unfortunately, the sport’s popularity was about zero when I was a kid, and so the first time I was seeing a hockey game live was at age 23.

I arrived at the local arena, the Staples Center, where a sluggish crowd of fans was making its way inside. Like lots of these places, it can transform into whatever they need, whether it’s boxing, basketball, or hockey. If people buy the tickets, they get what they want.

Are you used to going to soccer games? Well, here everything’s different. Don’t hide that flask with alcohol — they’ll gladly sell you some inside. Whiskey, Martinis, vodka — just step into the bar. 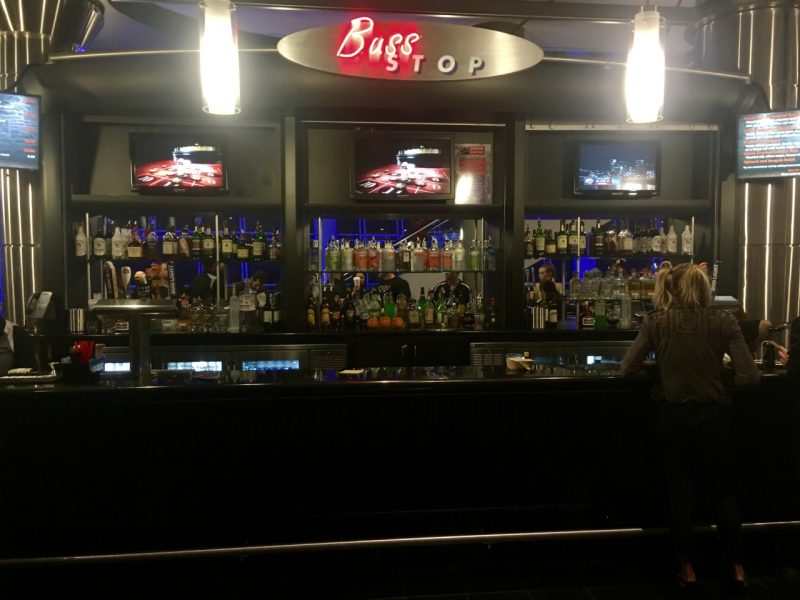 The bar at the L.A. Kings stadium. Photo: Andrew Ivakhov

The “2.0” in my headline isn’t for nothing, but it’s a little harder to defend the word “sports.” It’s more of a continuous money-making process, sprinkled with some hockey players they barely let play.

There are half-naked women — the kind you used to see only in the boxing ring — going around, handing out random lottery tickets. I found out later that this is how they lure you to future games. A mall food court would die of envy from the diversity of meals sold in this stadium, where I bought the worst tasting taco of my life for $12.

“You don’t come here for the hockey.” That’s the impression I got.

The only similarity with soccer fans that I saw was all the merchandise.

It’s funny, but the fans don’t really get in each other’s faces. Only occasionally, just to keep up the mood, someone will yell out something garbled, reminding me of the drivers in [the video game] GTA. This sport, where the athletes are real men, draws fans softer than the average marshmallow. It’s nice that people in the stands aren’t aggressive, but it robs the game of a certain energy.

Coming to the game in shorts turned out to be not the best idea. As soon as I sat down, the show started. Loudspeakers replaced the noise of a still missing audience. Dressed in the local team’s jersey, Cartman [from the TV show South Park] started leading us in a cheer.

The role usually given to soccer hooligans with chants, banners, and so on is handled here by the marketing department. Your job ends after you buy your ticket.

Finally the hockey begins. The movement, the speed, the skates cutting through ice, the first critical moments, and … then there’s a break for ads. It’s as unexpected as interrupted sex.

The players are used to it, and so are the fans. Sitting there with an open mouth, I was the only one who was confused to be learning about the latest cleaning product, instead of watching a hockey game. By the end of the game, you get used to it, too.

The athletic component of the game is amazing. I put to rest my fears of “I won’t even see the puck” with a $90 ticket. I googled the rules of the sport quickly and — voila — I could enjoy the game.

These players are intense. The sound from them on the ice echoes throughout the stadium. It turns out that you’re allowed to catch the puck with your hand, and they’re pretty graceful using their skates to move the puck around, too. The rules of hockey only add to the whole spectacle: I didn’t even notice how quickly the line changes. They don’t make a separate show of it, like they do in soccer. The players change faster than the prices on oil.

But why do they make every single play stoppage — even the necessary ones — into a chance to blast you with advertisements?

The scoreboard hanging over the rink transforms into a machine for making money off sponsors. Every two minutes, a bank presents some historical fact, or an insurance company tests you with some idiotic math exercise, taking you away from enjoying the game.

Three times, we applauded some soldier they kept calling “The Hero of the Game,” and the hair stylist “Floyd” kept asking us to guess different hockey players’ haircuts, handing out coupons. It was a big circus that had little to do with the sport.

And never mind about needing to stomp your feet at important moments in the game: they’ve got sound effects to do that for you. They even tell you when you should clap, and when you should boo. It’s a brave new world.

Fans for the opposing team are just mixed in with everyone, and the waiters run between the rows, sometimes blocking your view of everything. I know this wasn’t the theater, but really there just wasn’t any etiquette. The game itself simply wasn’t all that important. People go to stuff their faces, do some drinking, and take selfies.

Probably a lot of what I’ve described above is particular to a local hockey game. You get the feeling that money is being squeezed out of you, every second of the game. The banners circling the soccer fields now seem hilarious to me. It’s scary to imagine what they could do with soccer, if they set out to earn more money.

To summarize, hockey is a very cool sport. The players are real men, there is lots of fighting, there’s speed, action, and you can enjoy it, even if you only learn the rules five minutes before the game begins. But hockey in Los Angeles was more like a show. They’re always peddling something, there are lots of distractions, and you’re always be entertained somehow, and told to do something.

But it’s not cool when sports are removed from the sport.

A championship game, or a less ordinary game, probably would have had the energy that was lacking here. Alas, this wasn’t one of those games.

Oh and by the way, the Kings won three-to-two.

This text first appeared in Russian on the website TJournal. It has been translated into English by Kevin Rothrock.