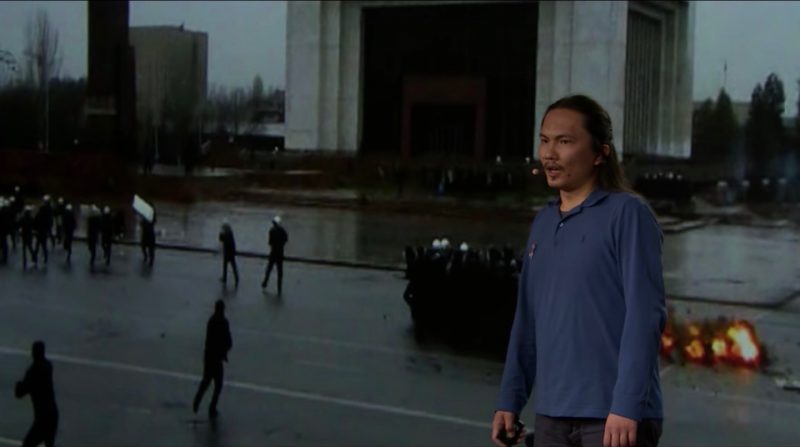 Screenshot of Bektour Iskender talking at the TED 2015 conference.

Below is a video of a TED talk by Bektour Iskender, co-founder of Kloop.kg, an organization which in the era of fake news and ‘information warfare’ is one of the word's most inspiring media stories. Out of 21 “world changers” speaking at the TED 2016 conference in Vancouver, Canada, in February, Bektour was one of the very few who was not a citizen of a Western country.

Kloop journalists, mostly graduates of the Kloop media school, are aged between 15 and 25. The news website is among the most popular in the Central Asian country of Kyrgyzstan.

Kloop differs from many news websites in the country through its unwavering commitment to impartiality. It is also the only major local news website in the republic of six million people that regularly attempts to expose corruption in the country occurring through state tenders. In doing so, it fulfils its role in serving the public interest.

An example is an article published December 22 titled How the State Property Fund Spent 45 Million soms (approx. $650,000) on a Website that Already Exists. Outside Kyrgyzstan's capital Bishkek, monthly incomes hover around $100. Kyrgyzstan is ranked 123 of 168 countries in Transparency International's most recent Corruption Perceptions Index.

Most recently, Kloop provided widely shared text and video coverage of chaos at passport control centres in the country where foreigners of dozens of countries were suddenly required to register within a period of five days after crossing the country's borders, thanks to a law passed in November.

The story was widely shared on social media, mostly by local citizens concerned the new law would be a blow to the country's fledgling tourism industry. Within weeks the law on registration was rolled back by the parliament and the number of countries whose citizens would be allowed to stay in the country for an extended period of time without registration was expanded in a new law.

Kloop.kg's main website is in Russian, which remains the most widely-used language in Bishkek where internet use is highest, but articles are translated into the state language Kyrgyz, and the minority language Uzbek.

In his talk at the TED conference in Vancouver, Iskender explains Kloop's emergence during the authoritarian rule of the Bakiyev family, its coverage of the revolution that unseated the Bakiyevs in 2010 and the organization's expansion in the post-revolution period.

Kloop.kg is also one of the only Kyrgyz media outlets that regularly covers infringements of the rights of the LGBT community in the country. Immediately after his TED talk, Iskender posted on Facebook:

I was the second one to speak at TED today in the morning. Andrew Pelling was the first one, and while he was showing the amazing stuff he's been doing while biohacking, I was standing backstage, waiting for my turn.

I decided to drink some water, took the bottle, and… I poured the water over my shirt, leaving two very visible dark spots on it!

I am very thankful to TED fellows help team who rushed me to the make-up room, where wonderful Meaghan dried my shirt with a hairdryer so quickly that I managed to return to the backstage and to listen to Andrew finishing his 4-minutes talk!

I was wearing the rainbow ribbon while talking. It was small enough not to distract people from my talk, but it is big enough to be noticed by those people for whom this is important.

I expect that if my talk is ever published, I might become the most watched citizen of Kyrgyzstan ever in the history of YouTube. And I want to use this opportunity to send my support message to the LGBT community of Kyrgyzstan and to all the people who are fighting against the stupid “anti-gay-propaganda” bill that has already passed two readings in the Kyrgyz parliament.

There is no place for Nazi-style legislation in my country. This bill must never be adopted, it should be thrown to the trash can and forgotten forever.

I want to tell all the gay, lesbian, bisexual, and transgender people of Kyrgyzstan, and also to all the people who are fighting for human rights, that I will use all of my possible fame and connections to help you as much as possible.

We will make our country fair, cool and prosperous. Don't be afraid of anything!

And, of course, I am very thankful to everyone who made this TED talk possible. There were so many people involved in it that I will need a separate post to name them!

I love you all!