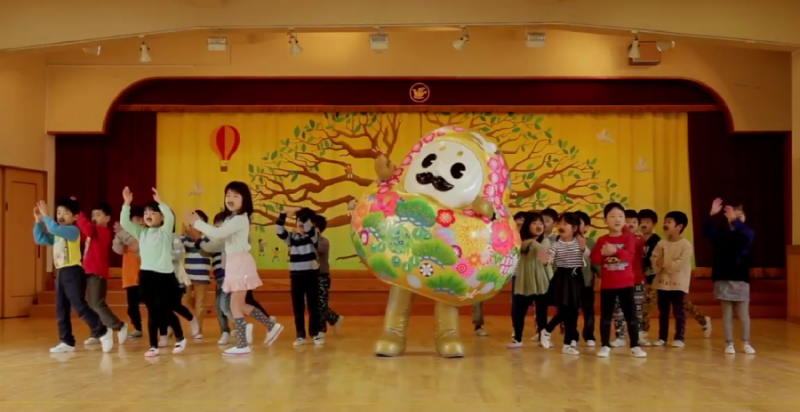 There is one Japanese mascot who is famous for having a large bottom. Earlier in November, Hyakuman-san, the official mascot of Ishikawa Prefecture, was unable to board the Hokuriku super express “bullet train.” The comical scene briefly made headlines.

Hyakuman-san can't get onto to the Hokuriku Shinkansen (bullet train). Is this a design flaw?

Ishikawa Prefecture is part of the Hokuriku (“northlands”) region of Japan. In April 2015, super express “shinkansen” train service started, linking the old castle town of Kanazawa in Ishikawa Prefecture with Tokyo by high speed rail. As a mascot for Kanazawa and Ishikawa, it would seem reasonable that Hyakuman-san would be able to board the train.

The “problem” was covered on Japanese television.

Hyakuman-san is so big he can't board the bullet train, or even pass through the ticket gates.

Hyakuman-san himself is a mustachioed traditional “okiagari” doll and good-luck charm, and is decorated in a traditional kaga-yuzen pattern, common to the city of Kanazawa and the surrounding region.

I spent five hours in Kanazawa looking for Hyakuman-san souvenirs to take back home. Of course, the first thing I saw [wasn't Hyakuman-san at all], but Yutaro [the local Japan Post mascot for Kanazawa] (꒪ȏ꒪)

I didn't have time to travel up to Wakura Onsen [a famous hot spring resort about an hour north of Kanazawa] so I went to the station platform to look at the train. The line-up for the buses in front of Kanazawa Station was as crowded as you would see in Kyoto.

The Hyakuman-san mascot can sometimes be seen in and around Kanazawa Station, where he delights travelers. His large bottom is clearly visible in this video:

It's Hyakuman-san! Here he comes again! Too funny! LOL

Design flaw or not, Hyakuman-san is not the only mascot who has a hard time entering trains or other confined spaces. Twitter user “Pink Miruku” has compiled a few photos that demonstrate the travails of Japan's plump mascots.

Enjoy these pics of Japan struggling to get their mascots thru small openings pic.twitter.com/ONgcZmAs4e