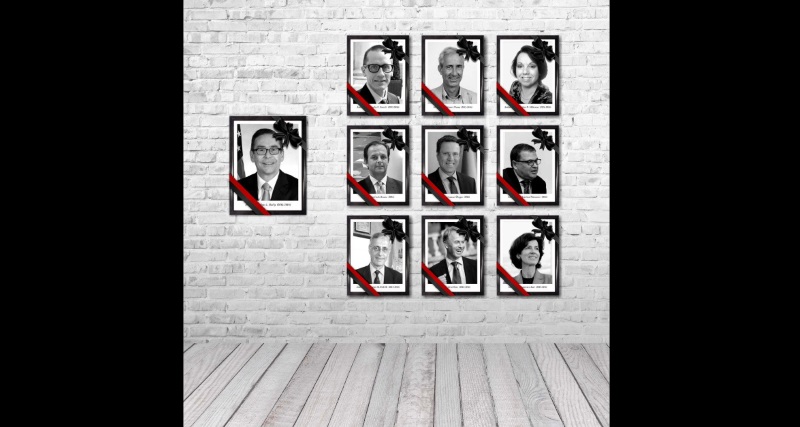 Along with opposition leaders and NGOs, pro-government propaganda in Macedonia is now targeting foreign ambassadors.

Macedonians went to the polls on December 11, but it remains unclear which party will have more members of parliament to form a government. The special parliamentary elections were held in an EU-brokered effort to re-stabilize the country, which has been in mired in political crisis since revelations of widespread illegal wiretapping by the ruling government surfaced in 2015. The country's two most powerful parties garnered 36.66 percent (Social Democrats) and 38.14 percent (VMRO-DPMNE) of votes, leaving neither party with majority support in the parliament.

Since the vote, the rhetoric coming from the ruling VMRO-DPMNE party has been particularly belligerent.

On December 19, unknown Internet users posted a gallery with images of ambassadors representing the European Union bloc (who were from Slovenia and Estonia), the United States, the UK, the Netherlands, and Italy photoshopped to appear like obituaries (see above).

The ambassadors were targeted after a December 17 speech in which ex-Prime Minister and VMRO-DPMNE party leader Nikola Gruevski accused representatives of countries that belong to NATO, such as the United States and the European Union, of “meddling.” In 2015, Macedonia, being a candidate for both NATO and the EU, invited them to help the country resolve its political crisis. This including overseeing the implementation of reforms.

Gruevski also announced that his party, which is a member of the European People's Party, is leaving the talks facilitated by representatives of the international community. He gave the speech during a protest meant to pressure the State Election Committee to rule in VMRO-DPMNE's favor in regard to allegations of fraud by the opposition. During the protest, VMRO-DPMNE supporters unfurled a banner aimed at US Ambassador Jess Baily that read, “Keep your hands off Macedonia.” 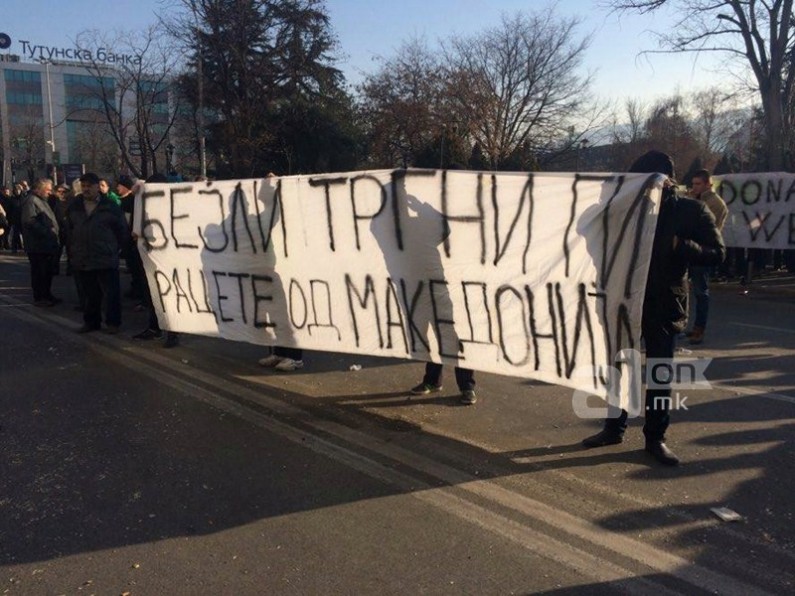 VMRO-DPMNE supporters with a banner “Baily keep your hands off Macedonia!” Photo by A1on.mk, used with permission.

Another group of Gruevski's right-wing supporters at the same protest also carried a banner reading “Donald Trump, we love you!”

On social media, many compared Gruevski's speech and xenophobia to those made by late Serbian President Slobodan Milošević, whose populist policies for retaining power included international isolation. Analysts quoted by Deutsche Welle warned that if this continues, “Macedonia is in danger of sliding into dictatorship.”

In an online video interview for the leading news program “360 degrees,” former EU Ambassador Erwan Fouéré deemed Gruevski's speech “shocking” and noted that speakers at the ruling party's rallies who “incite and provoke violence” include a former and current minister of foreign affairs. He asked in regard to the announcement:

Is what he said official government policy? And if it is not, then why doesn't the prime minister speak out? And indeed, where is the prime minister, is he sleeping? And what about the president, is he also sleeping? These are the people who should be calling for calm and restraint in these very very tense moment, but they seem to be totally silent.

The fake obituaries drew substantial media attention during the day of December 19. VMRO-DPMNE issued a formal reaction that evening, saying in a press release that such imagery was “unacceptable.” The statement is not available on their official website.

Several hours prior to the photoshopped obituaries’ publication, an assassin killed the Russian ambassador in Turkey. Social media users in Macedonia speculated that this may have prompted propaganda chiefs to pull back on threats of terrorism against ambassadors, given the events in Turkey.

The murder of the Russian ambassador took place at the worst time for the creators and publishers of obituaries for ambassadors in Macedonia.

Some social media users even dared to ask the Minister of Foreign Affairs to take responsibility for the issue:

The xenophobia has terrible consequences, doesn't it? Therefore, please stop spreading it!

Ambassadors haven't been VMRO-DPMNE's only focus post-election. Top politicians from the ruling party's coalition, like Amdi Bajram, as well as supporters at their rallies, openly advocated the death of opposition leader Zoran Zaev.

#Macedonia election: In cased you missed it, #VMRO activist parades with funeral cross with @Zoran_Zaev name. She is a school teacher… pic.twitter.com/DqvjZH0Y2i