Model displays one of the scarves inspired by the maps of cities for Cityzn by Azin. Photo shared by Azi Valy and used with permission.

In light of all the wars and conflicts happening in the world, a designer in New York City has created a brand inspired by cities that seeks to bring commonality into focus while respecting differences and creating “an awareness of place and leveraging fashion as a messaging tool to create social impact.” 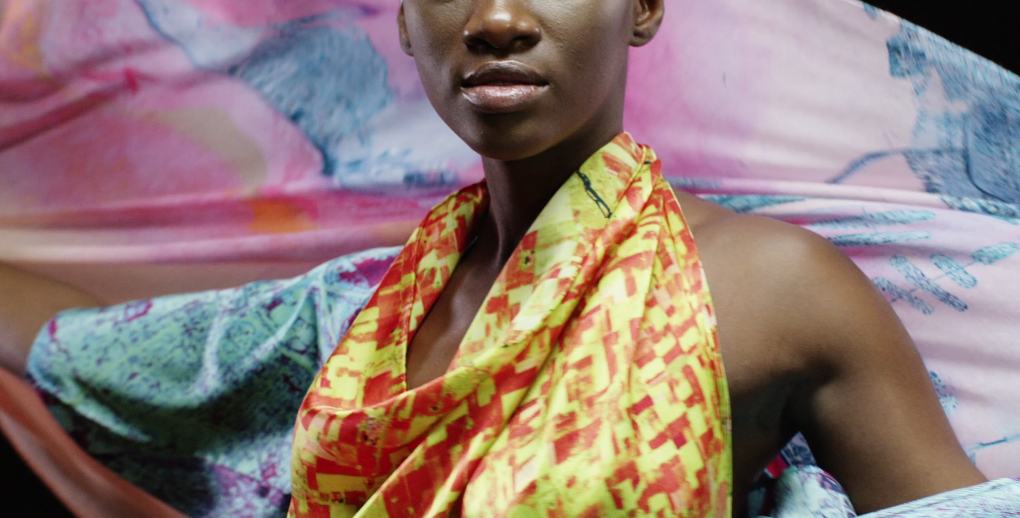 A model wears one of Azin's scarves. The designs are meant to connect “the heart and soul of a city to that of a garment.” Photo shared by Azin and used with permission.

“It’s a way of connecting the heart and soul of a city to that of a garment. Clothing is our first habitable structure. . . . It’s about looking bold and being bold. It's about global citizenship and not just nationalism or regionalism,” Azin Valy told me in an interview at her office in Soho. “It literally allows you to wear your pride on your sleeves or simply connects you to the global community.”

Omid Memarian: How did you go from being a successful architect to the fashion world?

Azin Valy: In 2011, my architecture firm, I-Beam Design, founded by Suzan Wines and me, was nominated for an urban planning exhibition at the Museum of Modern Art (MOMA) examining the future of cities that were going through the foreclosure crisis. As I was researching the urban structure of these cities—in New York, New Jersey, Florida, California and Nevada—I was amazed by their breathtaking views from above, despite the crisis they were facing on the ground. I wondered if there was a way to highlight their beauty while raising awareness about their challenges by incorporating them into textile designs. There I saw an opportunity to merge fashion and architecture (vis-à-vis urban planning) with social entrepreneurship. And so Cityzen by Azin was born, to bring awareness to place, and leverage fashion as a messaging tool to create social impact.

What excited me was the idea of allowing the landscape to define each design. For instance, the Tiber River forming the neckline of the Rome dress or the Chao Phraya River becoming a strap in the Bangkok dress, and the Ganges turning into a slit on the Dhaka dress.

The superimposition of the cities onto the shape of the body and playing around with the scale of each allowed numerous interpretations of each design which literally opened up a whole world to me. I felt that I could spend the rest of my life generating infinite designs while learning about each place and virtually traveling the world. It was also a way for me to connect to places I loved as well as places I was curious about. 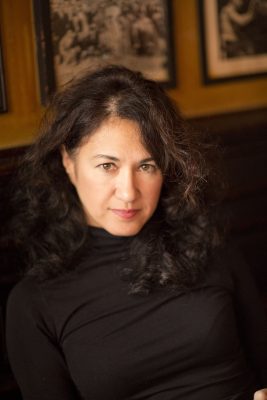 A portrait of the Iranian-American fashion designer Azin Valy. Photo shared by Azin and used with permission.

OM: When did you think of turning your idea into a fashion brand?

AV: When I realized the tremendous potential this concept has both from a design and creative point of view as well as the social impact it could have. After all, I am dealing with the World!
As an Iranian-American, I straddle two seemingly very different cultures that actually have a lot in common, yet are full of misconceptions about one another. I thought it would be a great opportunity to create a brand that transcends physical and mental borders and promotes a global dialogue towards understanding and peace.

OM: How you choose which cities to do?

AV: It varies according to the places I’ve been to or where I would like to go, or where my staff is from, but also based on world events and places in conflict or crisis. I research each city and learn about its history, culture, architecture, craft, etc. and choose colors accordingly. Each Cityzen piece is accompanied by a small hang tag or mini-guide that celebrates the featured city through the six senses of sight, sound, touch, taste, scent and thought, where we promote books to read or music to listen to or foods to taste.

I am also an idealist and like to choose cities that are in conflict, and show that the world is far greater than all the petty differences we go to war over, and that we need to unite in preserving it rather than destroying it. By raising awareness of areas in conflict or crisis, I hope to draw more attention to the plight of the people living there and utilize my brand for greater social impact.
I also work in collaboration with various charities to help raise funds and awareness for their causes according to their geographic location. 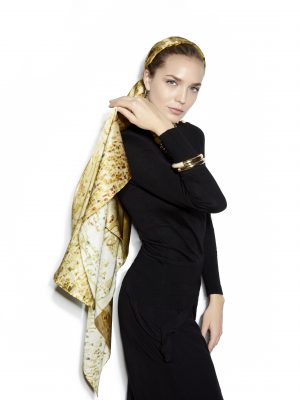 A model wears one of Azin's scarves. The line intends to have women ambassadors from all over the world to represent different cities in an effort to promote a global dialogue. Photo shared by Azin and used with permission.

OM: How hard was it to enter the super competitive fashion market?

AV: The challenge was the fact that I am an outsider to the fashion world—which may be an opportunity in and of itself. There is a lot that I have learned in a short period of time and a lot more to learn. I am excited about every aspect of it.

What is exciting about the fashion profession relative to architecture is the immediacy it has and the exposure it gets. The fashion industry has a tremendous ability to channel women who are 80% of the consumers into asserting their point of view not only through their spending but also their intellect.

OM: How do you envision the future of your brand? What’s the next step?

AV: For the near future, we are working on a collection of coats with an incredible Afghan/Swiss/American designer who is also an architect. Her name is Zolaykha Shehrzad of Zarif Design and she supports over 30 women in Kabul. We are producing a Kabul collection for next year which I am very excited about. We hope to have an event in the near future to showcase both brands and help raise funds towards peace efforts.

For the distant future, I am hoping to have women “ambassadors” from all over the world come together in sponsoring different cities and promoting a wider dialogue towards peace, as they are the peacemakers and the majority of donors in the world. I am also working on a business model in which I can partner with international and nongovernmental organizations to employ displaced people, particularly women, at fair market prices while creating a mobile manufacturing center within refugee camps.

Speaking literally and metaphorically, I have the entire world at my disposal to work with, and have come full circle in connecting all my interests.