Activists Around the World Could Learn From Peru's History of Protest 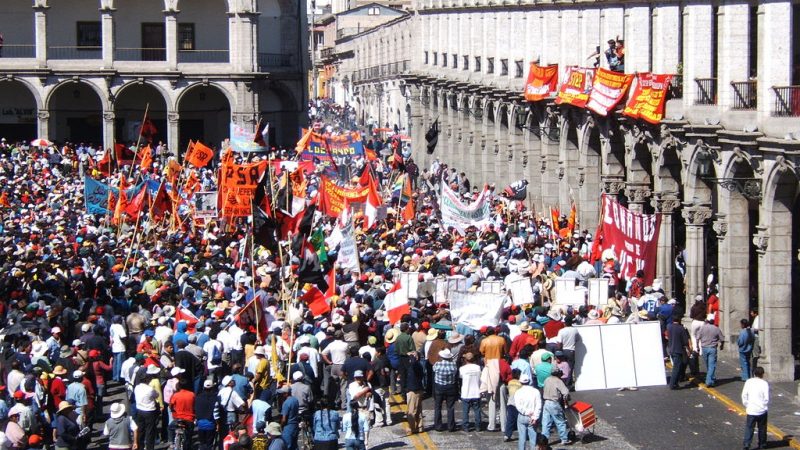 Protest in the main plaza of Arequipa, Peru in 2007. Public domain.

This article was adapted from a text originally published on the blog, Perdido en Ítaca. The text is based on declarations by the organization Provea (The Venezuelan Program for Education and Action in Human Rights, coordinated by the author and other members), which described the government of Venezuelan President Nicolás Maduro as “dictatorial,” following the suspension of a presidential recall referendum. Global Voices publishes an edited version this text below, with the author's permission.

How do you confront a dictatorial government? The answer can be found in the recent history of Peru, when local society rose up against the government of Alberto Fujimori, who ruled between 1990 and 2000, after winning three consecutive elections. Modern dictatorships can rise to power through elections. But once there, they can also use the mechanisms of democracy to extinguish true elections and remain in power indefinitely.

Victor Vich's book, “Symbolic Disobedience: Performance, Participation, and Politics at the End of the Fujimori Dictatorship,” offers an interesting analysis of the mobilization strategies in Peru that helped weaken the Fujimori regime during those years.

These performances aimed to build a new kind of citizen and sought, from out in the streets, to construct a new understanding of country and memory.

For Vich, the founding milestone was the 1992 “self-coup,” where “The Chinaman,” as Fujimori was known, dissolved Peru's Congress. With the country's political parties engulfed in a crisis of representation, the opposition to the dictatorship that emerged “began to be seen for its symbolic weakness and, above all, for its inability to express itself in terms of the formation of new social groups.”

Four years later, in 1996, following the approval of a controversial Amnesty Law that provided protection to military officers implicated in human rights abuses, a sculptor named Víctor Delfín led a march that would later give rise to the “Every Blood, Every Art” movement, which brought together people of diverse political backgrounds. As Vich writes:

They began to consider a deeply important idea: that the fight against dictatorship had to be imbued with a cultural climate able to articulate powerful symbols that could transform the official imagination of the regime. The fight to topple the dictatorship began to be waged through symbols and art.

In parallel, following Fujimori's third reelection, another group of artists began to mobilize. This group had three objectives: discredit the election results, demand new elections, and generate a broad movement of civil disobedience. In this vein, the artists, carrying candles, black ribbons, crucifixes, and even a coffin, performed the political “burial” of the National Office of Electoral Offices in a ceremony in front of the Palace of Justice.

The ceremony symbolically declared the Fujimori regime dead and illegit going forward. It was from this act that the Civil Society Collective, which would play a leading role in subsequent months, was born.

On July 27, 2000, around 250,000 people gathered in the center of Lima to take part in the March of the Four Corners (Marcha de los Cuatro Suyos), whose name refers to the four cardinal directions and symbolizes the four regions that made up the Inca Empire. Up to 40,000 of the demonstrators came from four different locations outside of the capital. Vich describes the march as “the largest and most organized protest in the history of the Republic.” The confidence gained through this demonstration prompted further creative and symbolic protests, as a response to the complicity of certain political parties with the dictatorship.

One such protest involved “flag washing,” becoming popular around July 2000. According to Vich, “the idea was to build a protest symbol that also contained a liberating and proactive message.” Every Friday, protesters gathered in Lima's Plaza Mayor and — using red trays, clean water, and “Bolívar soap” — they proceeded to  wash the Peruvian flag publicly “in an atmosphere that combined a party with social protest.” Once cleaned, the flag was hung on large drying racks. The protest went viral and, in short time, flags were being washed in cities throughout the country.

These “flag washings” reappeared in the post-Fujimori era, as well as in other countries, in protests against corruption and human rights abuses. The video below shows a flag washing at a protest against the presidential candidacy of Keiko Fujimori, the daughter of the former president.

The so-called “Vladivideos” scandal, involving a series of videos showing Fujimori's top advisor bribing leading politicians and other influential figures, revealed the extent to which corruption had spread throughout Peruvian society.

For the Civil Society Collective, the goal became clearer: It was no longer simply about toppling the regime of Fujimori and Montesinos, but about generating a broad citizen movement that could do away with the historic levels of impunity in Peru. This realization triggered a second form of protest: “Put the trash in the trash,” where activists distributed more than 300,000 trash bags bearing images of Fujimori and Montesinos, dressed in prison stripes. The bags were placed them inside various institutions.

Another protest involved the so-called “Walls of Shame,” where 15-meter-high (50-foot-tall) canvases bearing photographs of spokespersons for the dictatorship were hung in public, along with an invitation to leave a message for them. As Vich explains:

These performances aimed to build a new kind of citizen and sought, from out in the streets, to construct a new understanding of country and memory.