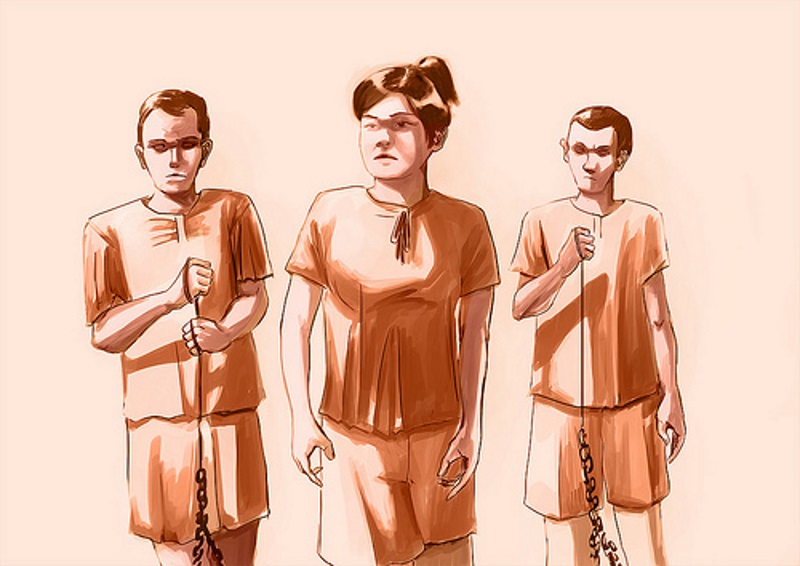 This edited article by Kritsada Supawatanakul is from Prachatai, an independent news site in Thailand, and is republished on Global Voices as part of a content-sharing agreement. The text was translated by Suluck Lamubol.

Prisons in Thailand still fail to recognize the basic rights of female prisoners, depriving women of essential health services and goods from sanitary pads to bras. Overburdened prisons due to Thailand’s harsh drug laws aggravate the current situation. This report reveals the devastating condition of female prisons in Thailand, places where women detainees live without dignity.

During my visits to prisons, female prisoners told me they receive bras through donations from outsiders. Oversized and so old they are no longer elastic, those bras are home to different types of fungus. Tick, an inmate, narrates her experience:

Whenever they give out bras, we will all go crazy. Bras are usually distributed by room but [what bra you get] also depends on whether you have any connection to the room leader. If you don’t get along well with the room leader, you will get the leftover bras without a chance to choose. Often I always get bras and pants that are too large, so I have to give them away.

The same goes for sanitary pads. We have to sign a form before getting a pack. They are bad quality and barely have any glue. When we wear them, sometimes we have to use rubber bands to hold them against our underwear. One time, a prisoner was running and the pad just dropped out onto the middle of the exercise field.

Since money is required to access basic goods in prison, incarceration can create financial strife for inmates who rely on borrowing. Pla, another prisoner, shares her experience:

We can withdraw a maximum of 300 baht per day (8 US dollars), an increase from the previous 200 baht maximum. I cannot live on that small amount so I have to take loans ‘from the inside’. But the interest rate is 20 per cent per four days. There are so many creditors-cum-prisoners who have gotten quite rich. Even though the authorities are aware of this, they don’t really want to intervene. If the borrowers do not have the money to pay back, the foodstuffs sent by their relatives are confiscated.

As for work, sometimes we have to do jobs like rolling cigarettes or folding gold leaf used in temples. Each worker needs to produce 400–600 pieces per day to earn about 100 baht every 3-4 months. Who said one doesn’t need money in prison? You do need money to survive.

As for food, she asks me if I have ever had ‘cold water mama’: instant noodles with cold water since the prison doesn’t provide hot water. Food in prison is repetitive and of low quality. She once ate porridge with chicken feet and pork so gummy that she couldn’t chew.

That was the situation before the junta came into power in 2016. After that, they were barred from even cooking.

Junta reforms for the worse

After the National Council for Peace and Order (NCPO) seized power in May 2014, the Department of Correction that administers Thailand’s prisoners was affected heavily. The result was new restrictions on prisoners’ lives.

Auyphon Suthonsanyakorn, the facilitator of the ‘From Heart to Heart’ program that works on the long-term rehabilitation of female prisoners, told Prachatai that women have faced many new challenges in prison since the NCPO came into power.

They have ordered female prisoners not to take anything up to the sleeping hall. They are only allowed to take three pieces of tissue paper with them. But women have specific needs: some are on their period, some wear glasses. They are also barred from taking books. Some women like to write in their diaries and some read prayer books before going to bed. But the NCPO gave a sweeping order to prevent any of that. Prison guards told me they are afraid of being found guilty if they don’t follow the orders.

“Inside, they always said do not get sick because you only ever get paracetamol to cure everything,” Auyphon Suthonsanyakorn said.

In some cases, prisoners face verbal abuse from health professionals. In the case of Tick, who returned to prison after giving birth, she had to see the doctor inside the prison.

The stitch that I had got infected. I told a male doctor that but he didn’t even bother to look at it. He said it’d be fine and gave me paracetamol.

He is the in-house doctor there and couldn’t be more rude. When he examined my record, he asked me, ‘How did you get pregnant when you’re so ugly?’. He also asked if the child has a father, or if I was sleeping around. I was so pissed off I cursed back at him. I got punished for that.

Women prisoners who live within a smaller compound within a larger male prison face even more problems than those in women’s correctional institutes or in the women’s sections of large central prisons. This is because women prisoners in male prison do not have their own medical unit, but have to share services with male inmates. They are given access to health services only after male inmates are finished, due to prison regulations that male and female prisoners are not allowed to mingle.

Auyphon Suthonsanyakorn mentioned an incident which reflects the situation of the health service in central prisons:

I’ve seen a case where a woman inmate got really sick and could not get up. She was lying there for many days. When I got in that day, she also had a high fever. When I touched her knee, it was really hot and swollen and badly infected. Yet she wasn’t taken to hospital. Some officers agreed it was a serious case, but they didn’t have enough authority.

Luckily, that inmate’s relatives requested that she be transferred to a hospital when she could not bring herself to meet them. The doctor later said that if she had come to the hospital just a bit later, she might have ended up at her own funeral.

The situation is comparable in central prisons, where women share facilities with male inmates and are not taken to hospital unless the situation is dire. In one such prison, a woman prisoner sprained her leg after falling down the stairs. She was taken to the in-prison medicine unit and given some topical cream. The nurse diagnosed that it wasn’t serious so they didn’t take her to hospital.

These days, she still limps. The bone likely fractured but since it never received proper treatment, she now cannot walk properly.

Women's correctional institutes are somewhat better. The doctors usually visit once a week. Women can access a wider range of medicines.

When winter hits, women inmates in the north and northeastern prisons have to suffer under the cold weather. Usually they are given three blankets per person to be used as a pillow, blanket and a mattress respectively. In winter however, that is not enough.

Chartchai Suthiklom, the former director of the Department of Correction — now a National Human Rights Commissioner — said that in principle, prisons are obliged to provide basic necessities to prisoners.

Why is it that prisons are overflowing with inmates? Does it mean that Thai society has more criminals or bad people than others? Or is there something wrong with Thailand's justice system?

Are atrocious prison conditions the fault of the Correction Department or the prisons? Actually, both share some responsibility. Yet prisons are just small jigsaws in the bigger picture of an inefficient justice system. Problems faced by female prisoners do not derive solely from entrenched hierarchies within the prisons; they are caused at root by the Correction Department’s measly budget.

A total of 84.58 percent of female inmates were sentenced from drugs cases. As of 1 June 2016, out of 35,768 convicted criminals, 30,821 were convicted from violating drug laws. Thailand’s overly harsh drug laws are putting more and more people into sub-par prisons.