In India, Moviegoers Are Expected to Stand for the National Anthem—Or Else 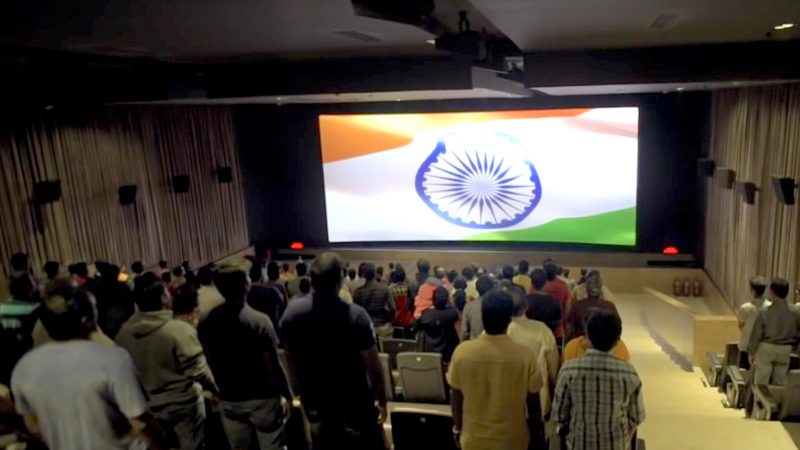 Chennai theatres play the national anthem before the main picture starts rolling, in accordance with the Supreme Court's ruling. Screenshot from YouTube Video by Netalert The Hindu

The tradition of playing the national anthem in Indian cinema halls is old, but laws making it mandatory are fairly new. In 2003, the Maharashtra state government made it mandatory that the national anthem be played at cinemas in that state. According Narendra Verma, the politician who proposed it, the anthem would unite people together when played at cinemas since millions of people watch movies every day.

But that was only one state. Now, every cinema hall across the country must play the national anthem along with visuals of the Indian national flag before the start of the film, following a directive issued by the Supreme Court of India on November 30, 2016.

The court also declared that the ruling should be followed in “letter and spirit” by moviegoers, meaning those present should remain standing while the anthem is played.

Following the ruling, people at cinemas have been targeted by both state forces as well as self-proclaimed vigilantes for not standing. There have also been reports of people being assaulted on this pretext.

According to a report in the Hindustan Times, 12 people were detained, albeit for a brief period, in Thiruvananthapuram, the capital of the Indian state of Kerala, for allegedly disrespecting the nation by not getting to their feet while the anthem was played at the International Film Festival, Kerala. These arrests were also followed by protests at the festival venue. The protesters remarked that such arrests were a threat to democracy.

Kerala writer Kamal C Chavara was arrested on charges of sedition over a satirical Facebook post he published in response to people being detained.

Even those with disabilities have not been spared. Writer and disability activist Salil Chaturvedi, who uses a wheelchair, was assaulted from behind for not standing.

What we feared as consequence of SC's absurd order on National Anthem is happening. It's promoting Vigilantism!https://t.co/JzD57Ej7fo

Several arguments against the logic behind the court's ruling have been put forward. For instance, a South African woman, whose Indian boyfriend had been assaulted over her not standing up during the anthem in a Mumbai cinema hall, pointed out how she found the concept of nationalism to be narrow as it homogenized a diverse population. Besides, she also had no geopolitical commitments towards India, but none of this meant that she was disrespecting the nation or the anthem.

Similarly, some have argued that playing the national anthem before the start of a film is actually an insult to the anthem. Noted secularist Ram Puniyani had a perspective along similar lines, saying that the court's ruling is tantamount to curtailing civil liberties. In his words:

While a decade ago the Court could rule in favor of the individual liberty; now it seems the trend is just the opposite as ‘love for mother land, nationalism, patriotism’ are being flaunted at the drop of the hat. All those not agreeing with the policies of the ruling government are being dubbed anti national, it is being said that they are ‘not patriots’.

Just as some individuals are not taking the diktat all that seriously, not all cinema halls are strictly falling in line, reports suggest.

A Twitter user called Suhail shared a photo of an interesting letter to the editor, calling it the “perfect retort to the national anthem debate”:

I go to the cinema to relax and amuse myself, not to show my patriotism to my fellow countrymen. People who question my patriotism can come to my house. I will make it mandatory for them to sing the national anthem before they enter. -Prince Bharadwaj, Asansol

But for Yogesh Viswanathan, not standing up while the national anthem is being played is indeed a mark of disrespect that can be avoided:

#iffk 52 seconds can't u stand for #NationalAnthem ? If u can't stand outside for 52 seconds, don't insult by doing something.

Interestingly, some are arguing that despite the Supreme Court's ruling, people still aren't legally bound to stand up when the national anthem is played at a cinema hall. There have been allegations of judicial overreach, since the courts are not supposed to don the role of the legislature:

Remember, none of these directions have any statutory backing. There is no law which is being implemented, nor are any fundamental rights being violated in the absence of such a law. That, however, does not stop the court as it assumes for itself the role of the legislature, executive and judiciary in one go, claiming an extra-constitutional power that is the hallmark of absolute tyrants.