“The only revenge to which I aspire is witnessing the triumph of the noble ideals for which I fought, and for which so many men and women in this country have lost their lives and their freedom.”

For those of us not living under shelling or siege in Syria, we have the luxury of avoiding or trying to avoid viewing the public spectacle of cruelty and death.

In a futile attempt at escaping the current horrors in Aleppo and Idlib, I sought shelter under the familiar instead: the Syrian uprising’s vast visual archive of demonstrations, sit-ins, flash-mobs, and graffiti campaigns.

Through the footage we’ve inherited, we are witness to even the most minuscule of protests in long-forsaken rural peripheries, each significant enough for somebody to upload to YouTube along with their greatest hopes. 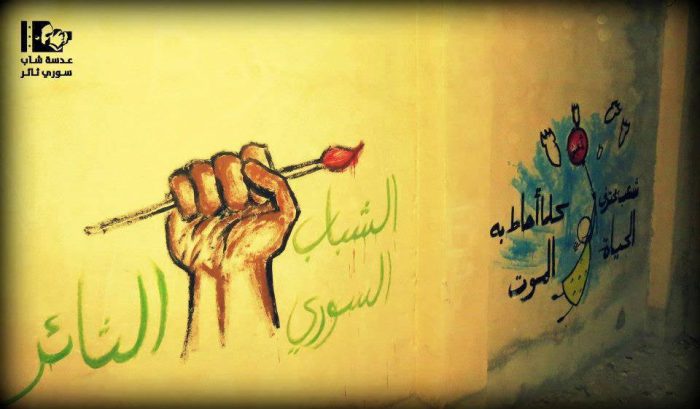 Whether having access to such a memory trove is a blessing or a curse, I now have no idea. What I am certain of is that my sinking into nostalgia has proven to be equally painful, for today I know the future that would have awaited the hopeful.

When Syrians originally published this footage, we read it as a testament to The World and to fellow Syrians of their existence. Years later, in hindsight, we might now wonder if they had also hoped to ensure that when the inevitable flames of nihilism and civil war burn down their land—present and future—they would still be able to salvage fragments of their collective memory from the ashes of revisionism. That maybe they sought to preserve a corpus of incontestable evidence to prove to themselves that they did indeed rise up—that this was not a fleeting daydream. That even after the conqueror and his jubilant entourage take a victory lap on the ruins of their homeland, Syrians could still hang on to the songs they once sang, the streets they once marched on, the squares they once possessed.

To cope with my helplessness in the face of carnage; to guard the remaining shreds of my sanity; to convince myself that 2011 and 2012 actually happened and were not a chapter mistakenly thrown out of a dystopian novel, I often feel the need to go back to those videos, particularly the ones uploaded by the Syrian Revolutionary Youth. I chant with them, gasp at their courage, and wonder: How many of those chanting in the videos are still alive? Is it easier to count the living than to count the now dead among them?

Remember when the Syrian Revolutionary Youth chanted for bread, freedom and social justice at a time when the elites of the political opposition insisted that this revolution was mainly about liberty and electoral democracy?

Remember when they gathered in their Damascene neighborhood of Rukneddine and serenaded Gaza, and then one of their comrades, a Palestinian refugee from Haifa, added: “O, Haifa, we’re with you till death!”?

Remember how they worked and organized together, men and women, not because of an imposed quota but because they genuinely believed in gender equality?

Remember how they mocked and rejected foreign intervention at a time when the elites of the political opposition were busy groveling to the United States and other outside powers?

Remember how they opted to remain independent and refused external funding when many, more famous groups had already begun to rely on foreign aid dictated by donor agendas?

Remember how they braved the crackdown and defied Syria’s notorious intelligence and security apparatus, week in and week out until June 2013, to show their support for besieged towns and cities?

Remember how encouraging their stance for real national unity was amid rising incitement and fear-mongering?

It probably matters little now, but they deserve to be remembered and honored.

They were beautiful and they were young, and they had hearts as big as Syria.

They were stubborn, erratic and slightly reckless. And they were outrageously courageous—far too courageous.

Now many of them have gone so soon, without goodbyes. They are gone now, but their voices remain and, alongside that, our permanent guilt.

It was on 30 December 2013 that nine members of the Syrian Revolutionary Youth were arrested by Syrian security forces: two were abducted from college in the afternoon and seven were taken from a house in Rukneddine in a night raid.

Six of them were killed under torture in Syrian regime jails, one by one, dream by dream: Roudin Ajek, Fayez al-Ayoubi, brothers Muaz and Qusai Burhan, Amer Zaza, and Imad Ghanam.

In December 2014, Amer and Imad’s deaths under torture were finally confirmed, months after their actual death, by a cold, ruthlessly indifferent phone call from security forces to their family members: “Your brother is dead. Come receive his identification card and belongings.”

Syrians are repeatedly asked to provide hard evidence to corroborate claims of massacres by the Syrian regime. But how can the parents, relatives, and friends of those killed under torture present such proof when all they are given is a wet piece of paper and the last scarf worn by their loved ones during their arrest? How can they satisfy the neutral, professional obsession with accuracy and verification when they have no clue where their beloved are buried, if buried at all, how they were tortured, and even why they were taken in the first place?

Months later, on 31 May 2013, Palestinians marked the Global Day of Solidarity with the Syrian People by holding a small protest in occupied Jerusalem’s Damascus Gate. Imad asked me to carry a banner for the Syrian Revolutionary Youth during that protest. “This way we can fulfill our dream of visiting Jerusalem, if only through a banner.”

His eloquence and political maturity were striking, and his commitment to the Palestinian cause was remarkable. “The Palestinian struggle has inspired our revolution,” he added, “and Palestine is present in our protests not only through the flags, signs, and chants, but also through the Palestinian refugees who protest with us all the time.”

Imad had moved to Egypt following his release. He stayed there only briefly before deciding to go back to Syria. It was risky, but the young man was too attached to Syria and to the uprising and chose them over the safety of exile.

I could not get in touch with Imad again after his return to Syria. I could never tell him how much I missed him or ask him how he was doing.

When you have friends who live under the imminent threat of arrest, forced disappearance, or shelling, make sure to constantly remind them how much they mean to you. Do not postpone the call or the message until tomorrow for tomorrow may never come. Savor your conversations with them, hold on to their memories, cherish their smiles, remember their first words and the final song you shared with them. Do not simply expect that they will reply the next time you write or call. And do not take their presence for granted.

Another friend whose presence we took for granted is Jihad Asa’ad Muhammad. Perhaps it was because he was outspoken and prolific. Maybe it was because his writings articulated all that we failed to say, or maybe because we thought he was too strong for absence. But it has been three years, four months and seven days since his arrest. The man who powerfully portrayed the heroic struggle of the mothers of the disappeared in Syria, is now himself forcibly disappeared.

When you have friends who disappear, you first count the days since anyone last heard from them. The days then turn into months. Now, we are counting in years. These years flirt with our fading hope and test our fragile resolve yet we cling to the mothers’ unshakable faith. Umm Jihad’s heart tells her that he will return soon, and you must always trust a mother’s heart. Somehow.

But when Jihad is released, how will we look him in the eye and admit that the revolution has been defeated? That Syrians have been trapped between an emboldened dictator and a litany of warlords vying for power and control and profiting from people’s suffering? That our demands have been reduced to merely pleading with experts, analysts and war tourists to just shut up for a moment so that we might mourn in silence and count our dead in peace?

When Jihad is released and asks us about Homs, Aleppo, Qalamoun, Mleiha, Harasta, Zabadani, Douma and Yarmouk, what are we supposed to say?

And when he asks us about his friends who we know have been killed under torture or about his family that has been dispersed and torn apart, do we just point to the wreckage or to his father’s grave and remain silent? Or do we simply ask him to sing? Sing for the fallen and for those fooling death; sing for the shattered dreams, the Syria that might have been, and for dreamers who will never be forgotten?