Remembering Castro’s Commitment to Healthcare and Beating Ebola in Africa 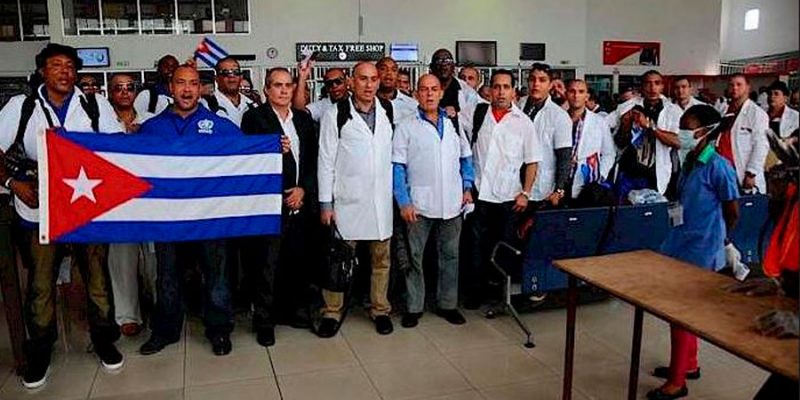 After approximately six months of fighting the Ebola virus in Liberia and Sierra Leone, 151 Cuban doctors and nurses return to Cuba. Photo by Enrique Ubieta Gómez with permission.

Political leaders and citizens worldwide have reacted in different ways to the recent passing of Cuba's former leader Fidel Castro. West Africa also had a lot to say about Cuba and Castro, but its perspective is driven by the very specific history the region shares with Cuba.

Political discourse and human rights have been important, but medical assistance and medical training were at the heart of Cuban-African relations during Fidel Castro's leadership.

Salim Lamrani, a lecturer at the University of Reunion Island, stated in an article published on Invetigaction.net:

Since 1963, nearly 77,000 Cuban doctors and other health workers have offered their services in 39 of 50 African countries. Currently, more than 4,000 health professionals, over half of whom are doctors, are working in 32 African countries.

On Nov. 30, Ms. Kenia Serrano, the president of the Cuban Institute for Friendship with the Peoples, announced on the Cuban news website Ahora.cu that 40,000 African youths have been trained in Cuba.

Two months earlier, she spoke at the 4th African Regional Conference for Solidarity with Cuba, held at the African Union headquarters in Addis-Abéba, Ethiopia, where she reported that more than 8,000 Ethiopians have been trained in Cuba.

Cuba operates more than 1,100 “friendship associations,” but it has especially close ties to Africa, Serrano stressed, telling the conference that Castro was a major supporter of solidarity and friendship between Cuba and African countries from the first days of the revolution, when the first Cuban medical team arrived in Algeria in 1963.

Cuba currently has cooperative relationships with 52 of the 54 countries in Africa. According to official sources, these efforts focus largely on healthcare, and have yielded positive results, especially among the most disadvantaged populations.

Cuba has also offered more than medical training, sending its own personnel to help African countries in many areas. During the Ebola virus outbreak in West Africa, for example, Cuba sent a remarkable number of doctors and nurses to fight the epidemic.

In fact, with its first contingent of 62 doctors and 103 nurses, Cuba, a small Caribbean island of only 11 million inhabitants, contributed aid equivalent to that of the rest of the world combined. And it didn't stop there. When other, richer countries were slow to respond, Cuba sent an additional 400 specialists.

This help is exactly what the director general of the World Health Organization (WHO) and countries like Guinea, Liberia, and Sierra Leone have said they need.

WHO director general Dr. Margaret Chan praised Cuba's actions in September 2014, saying, “I am extremely grateful for the generosity of the Cuban government and these health professionals for doing their part to help us contain the worst Ebola outbreak ever known.”

In an article published on the French-language website Francecuba.org, Dr. Jorge Delgado Bustillo, the assistant director of the Unité centrale de coopération médicale (Central Medical Cooperation Unit), stated that Cuban specialists faced major challenges during this mission. Bustillo, who was in charge of the brigade sent to Sierra Leone, described the intense preparation they received at the Pedro Kouri Institute of Tropical Medicine, with guidance from WHO and the Pan American Health Organization.

We've been fighting a practically unknown and very dangerous epidemic. The training for how to put on the personal protection equipment called for rigorous preparation. Those wearing a protective suit lose an average of more than one liter of water per hour. So, it was imperative that our personnel get used to wearing them. […]

We weren't always able to diagnose our patients’ illnesses. The exam results would arrive late due to a lack of laboratories. Thanks to our insistence, ten centers were opened and we could get more accurate diagnoses. In the case of Ebola, we were able to get results within 12 to 24 hours. Everyone benefited.

Cuba and the Republic of Guinea also share similar revolutionary histories. The former French colony gained independence in 1958, and was the second country to establish diplomatic relations with Cuba. Shortly after Guinea achieved independence, once the French had left, Fidel Castro sent several experts (teachers in particular) to help the fledgling state.