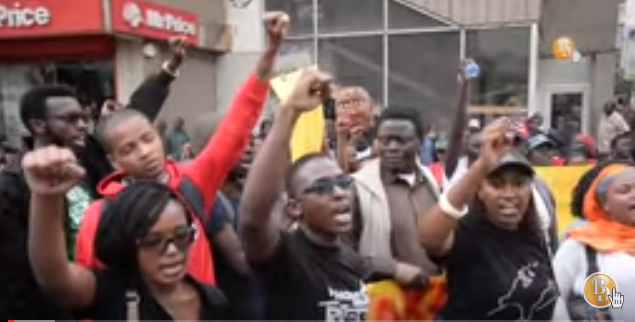 A screenshot of a YouTube video of Kenyans with raised fists taking part in #TakeBackKenya protest in Nairobi, Kenya.

On December 12, 2016, Kenya marked its 53rd anniversary of independence from Britain. The Jamhuri (Kiswahili word for Republic) Day celebrations in Nairobi would typically have proceeded in the traditional style, with the central business district calm, the Kenyan flag hanging from various buildings, and few Kenyans walking about on this national holiday.

Instead, it was the same day on which a movement formed by ordinary (mostly young) Kenyans, known as Kenyans on Twitter (KOT), planned a peaceful walk along the streets of Kenya's capital. The #TakeBackKenya event had been planned months in advance, a web presence set up and the required permits obtained from the Kenyan police department in order to hold the demonstration.

However, what started as a peaceful walk meant to denounce corruption and poor governance, turned into running battles between the protesters and police after officers used teargas canisters to disperse the people — both men and women — who were walking from Tom Mboya street to Jeevanjee Gardens shouting, “Lipa Kama Tender” (“Pay It Like You Pay Tenders”) and “Take Back Kenya”, all the while singing patriotic songs.

The irony of ordinary Kenyans being tear gassed on the country's independence day was not lost on netizens, many of whom began calling out the ruling Jubilee party for curtailing the very freedoms that Kenyans fought so hard for 53 years ago.

Corruption is rampant in Kenya; the nation maintained its poor score last year in the Transparency International global Corruption Perception Index(CPI), scoring 25 on a scale of zero to 100 (with zero perceived to be highly corrupt, and 100 very clean).

Among countries that participated in a 2016 PricewaterhouseCoopers survey on economic crime, Kenya was the third most corrupt. Kenyan President Uhuru Kenyatta is known to have said that his government cannot fight corruption. He was captured on video saying, “Sasa mnataka nifanye” (“What do you want me to do now”), in response to allegations about the massive scale of corruption in his own government.

The #TakeBackKenya movement is drawn from the often criticized, Internet-savvy, Kenyan middle class, which is often referred to as “keyboard warriors”. This group has, in the past, been accused of participating only virtually in the agitation for better governance and accountability from the government.

It was the first time a citizen-led movement, not affiliated to any civil society organisation, was taking its thoughts, frustrations and calls for improved governance and better accountability of public funds from social media spaces to offline spaces.

#TakeBackKenya was trending nationally on Jamhuri Day and has become a true movement, allowing Kenyans to ask hard questions — especially at a time when Kenyan doctors working in government hospitals have been on a one-week nationwide strike. The medics are demanding better pay against the backdrop of the scandal of public funds that were allegedly looted through Kenya's Ministry of Health — the very ministry under which they are employed by the government.

The movement comes at a time when both doctors and ordinary Kenyans are demanding — using the hashtag #LipaKamaTender — that the government pays health professionals like they pay for illegally won tenders.

Despite the #TakeBackKenya organisers making it very clear that theirs was a citizen-led public participation and active citizenship initiative, Kenyan media houses have referred to the participants as activists.

Apart from “My fellow Kenyans” ,which
other part of President Kenyatta's speech
was true? #JamhuriDay2016 #UCLdraw #TakeBackKenya

No, Uhuru doesn't have a regime, what he has is a tragedy that must be stopped in 2017. Such a dramatic president my god #TakeBackKenya https://t.co/0TILUGfU8x

Kenyans will be going to polls in August 2017, and public dissatisfaction with the current status quo is rife.

#TakeBackKenya the thuggery in Kenya leadership, one day, they will steal their own bank account, thinking its a public account

Waiguru, meanwhile, thought the fact that Kenya has an Ethics and Anti-Corruption Commission quite ironic:

Kate Mbuto talked about her experience of taking part in the march:

#TakeBackKenya was my first ever protest. I was so scared did even have breakfast. But I've learnt to stand up to power

As the #TakeBackKenya hashtag continues to build momentum online, many Kenyans are beginning to share messages asking other citizens to take a stand against corruption. Could this be Kenya's Arab Spring?