What Are People Naming Their Kids in Mexico? 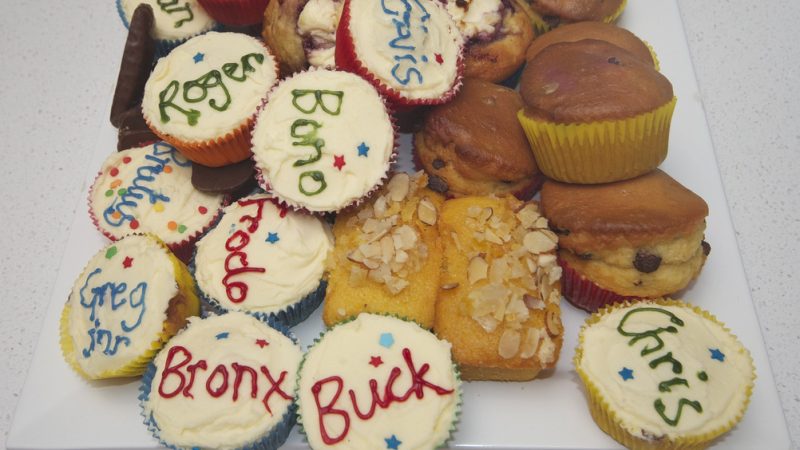 Before writing a post for Global Voices, one of the most important parts of the process begins with conversations — the exchange of ideas among community members. These discussions take place through various online platforms, but the flow of ideas intensifies when GVers meet directly — face to face — like when part of the Global Voices Latin American team and the general editors shared a table in Mexico City at the beginning of December 2016:

– And what are the naming customs of people in Mexico? Where I live, people opt for traditional names like Juan, Manuel or María.

– Oh no, that rarely happens here. Let me tell you some of the names that parents give their children…

Are you wondering how the conversation ended? The answer contains the inevitable phrase:

The conversation first addressed the issue of foreign names that are sometimes written with an unusual spelling. This problem has been documented in Nuevo León — a state in the northeast of the country — by the public servant in charge of registering people, in a piece available on the Aristegui News portal:

In our database, we have a number of uncommon names, including Kevin, Britany and Brayan, but we also have much rarer ones which are a cause of bullying.

Many people may find it incredible that in Mexico there are people whose parents named them Terminator, Usnavy, Hitler, Lady Di or Zoila Rosa (which in Spanish can be read out loud as “I'm the rose”), but this is a very real situation.

In other states, laws have been passed to limit this phenomenon. The case of Querétaro stands out where, according to some some sources, the public servants in charge of the registry can make suggestions to the parents when the name that they intend to call their child could cause mockery. These public servants must strike a fine balance, as they must still respect parents’ freedom to choose their children's names. It is not a question of some names being prohibited as they are in Sonora (in the northwest of the country), according to information on the Sopitas portal:

According to article 46 of the new legal framework, the Civil Registry officials are now strictly prohibited from registering infants with names that are pejorative, discriminatory, infamous, demeaning, meaningless, symbols or acronyms, or that would subject them to mockery.

There is even a list of forbidden names. If you're curious, you can find it on the Animal Politico site. Other examples include: All Power, Email, Scrotum, Harry Potter, Pocahontas, Twitter, Virgin and Yahoo.

This isn't an issue that has gone unnoticed by the traditional media, but it is worth mentioning that by covering it, examples that violate people's privacy are disclosed.

Whether on television or on the Internet, it is possible to see uncensored, undistorted photo identifications of people named Usnavy Marine or Christmas Day. This exposes their personal information such as their address or date of birth, thereby violating their privacy and putting them at risk for becoming victims of identity theft, a crime that is occurring more frequently in Mexico.

The online version of the Excélsior newspaper offers an example of one such privacy violation; it shows the ID card of a man with one of the aforementioned names. Here, however, we have taken precautions so that his personal information will not be revealed. 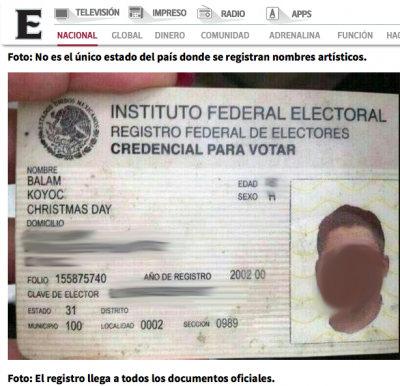 Screen capture obtained from the news website Excelsior.com. The image has been distorted by Global Voices to protect the personal information of the person in question.

It is worth noting that Mexico is not the only Latin American country in which the parents’ “creativity” in naming their kids draws attention for the wrong reasons. Chile's case is particularly interesting, but Uruguay is not far behind, as became apparent in a story by Nélson Fernández, in which an unfortunate name was chosen for reasons that seemingly had to do with the calendar:

The creativity (or irresponsibility) of some Uruguayans in naming their children has been the focus of attention for many years. One of the strangest examples was a couple that wanted to christen their child with the name of that day's saint. They looked at their son's birthday on the calendar and saw that it coincided with the end of the judicial recess (the Justice Department's annual vacation). Incredible, but true, the Director of the Civil Registry confirmed that the child was born with the name ‘Open the Courts’.

The mockery and derision that the kids who receive such names are exposed to will be discussed in detail in an upcoming instalment.