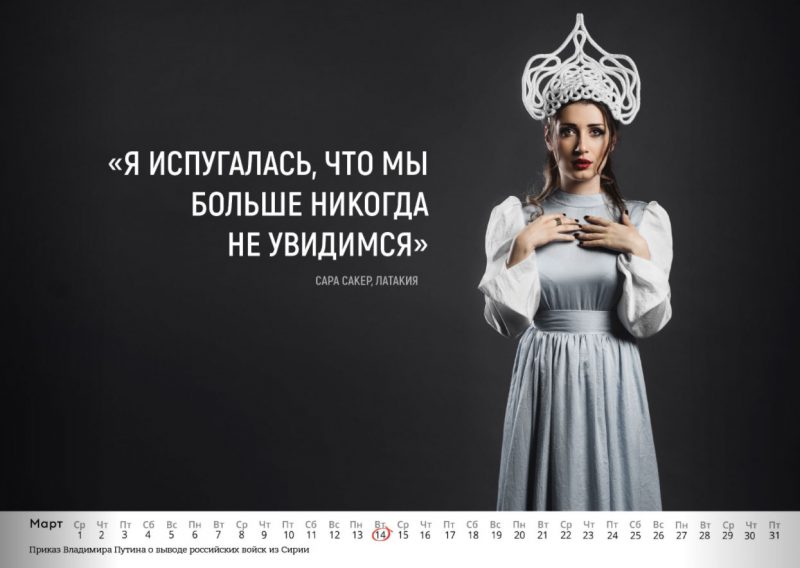 Almost 4,000 non-profit organizations applied for Kremlin grant money earlier this year, hoping to win funding for projects designed to promote athletics, values, and science among Russia’s young people. Roughly 238 million rubles ($3.8 million) was divided up and spread across 70 different projects. One of the nine grant operators, the Russian Union of Youth, was tasked specifically with using the money to “popularize Russian cultural heritage.”

This week, eight months later, the public got a taste of Russia’s pop culture: a glossy calendar featuring a dozen beautiful Syrian women, posing beside flirty captions that praise Moscow’s armed intervention in the Middle East. Each of the women wears a “kokoshnik” head-band, “as a sign of respect to Russia.”

The newer creation isn’t as sexualized as the 2010 birthday gift, and it’s also less exclusive. This time, the lady photos are addressed to “Russian military officers,” and a special shipment was sent to troops in Syria on Saturday, Dec. 17.

Just so Putin isn't totally forgotten, Russian soldiers will still get a reminder about their president late in the year, on his birthday. “Tell me who your commander in chief is, and I’ll tell you who you are,” says Miss October, a woman identified as Yara Khasan. 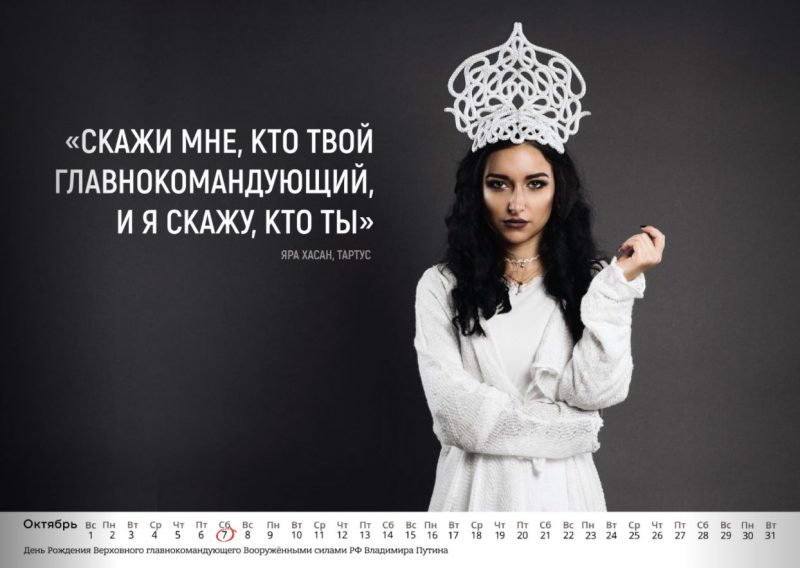 Other months bear similar hubba-hubba messages meant to convey the gratitude of women relieved, rescued, and maybe aroused. “You had the holiday, but I got the presents,” jokes Miss February, the month when Russia celebrates Defender of the Fatherland Day.

It’s unclear when the calendar was completed, but some of the monthly quips are already grimacingly outdated. Miss August, for instance, poses as if in prayer and says, “The fate of my Palmyra is in your hands,” referring to the ancient Syrian city taken by government forces with Russian air support in March, and then suddenly recaptured by Islamic State combatants last week, on Dec. 11. 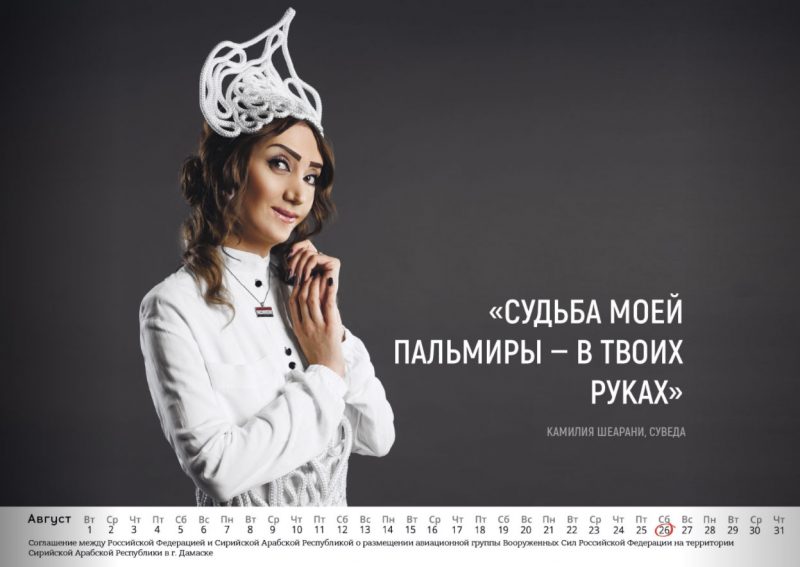 “The fate of my Palmyra is in your hands,” says Miss August. Source: FromSyriaWithLove.ru

In November, the calendar even observes the day Russia’s elderly aircraft carrier, the “Admiral Kuznetsov,” arrived at the shores of Syria, to help in the air war. Since the ship’s arrival, however, two planes have crashed while trying to land on the vessel, thanks to mechanical problems on the flight deck.

The calendar is the work of a group called “Citizen,” which the Russian Union of Youth selected to design a project that would identify “nationally-oriented young artists” capable of expressing Russia’s “cultural and national values,” as well as the “victories and achievements of modern Russia.”

The calendar is certainly a monument to Russian victory, and its authors have not disguised their contempt for American reluctance to join Moscow's defense of the Assad regime. In a press release on Dec. 15, the creators wrote:

Recently, the Western media often cites the [social-media] accounts of “Syrian girls” who write in perfect English about how they suffer daily because of what the Russians are doing. And these “girls” can’t even respond in Arabic when people offer to help. An increasing number of people are starting to understand that these wild stories aren’t being written by eight-year-old girls, but by social-media experts in the CIA. The organizers and participants of this project, however, think it’s important that the [Russian] men fighting the terrorists [in Syria] know that real Syrian girls are thinking about them.

The remark about social media and eight-year-old girls is presumably a dig at Bana Alabed, the seven-year-old girl whose mother famously tweets from rebel-held East Aleppo. Bana rocketed to media fame in late September, prompting a furious response by pro-Assad Internet trolls and those seeking to discredit her existence. On Dec. 14, the citizen-investigative website Bellingcat published research strongly suggesting that the girl indeed exists and lives in East Aleppo.

The chairman of the Russian Union of Youth is Pavel Krasnorutsky, one of Vladimir Putin’s so-called “proxies,” meaning he was authorized to speak on Putin’s behalf during the 2012 presidential campaign. After winning the race, Putin kept the proxy program active, and Krasnorutsky still regularly contributes expertise on education issues.

Update: The Russian website TJournal reports that at least some of the women featured in the calendar were mortified to learn about the suggestive phrases attributed to them. Yara Khasan, or Miss October, reportedly posted a friends-only message on Facebook, assuring her acquaintances back in Syria that she and the other women knew nothing about the calendar's racy captions.

“We thought it would just be our photographs,” Khasan told TJournal. “But we were shocked when we saw the calendar online with these stupid phrases. […] I explained to my circle of friends on Facebook what happened, because the reaction in Syria has been awful. Everyone is furious about these phrases.”

Khasan says she and the other models were told merely that the calendar was meant as a thanks to Russian soldiers for their fight against terrorism in Syria. She has asked the calendar's makers to delete the suggestive captions, but copies have reportedly already shipped to troops in the field.