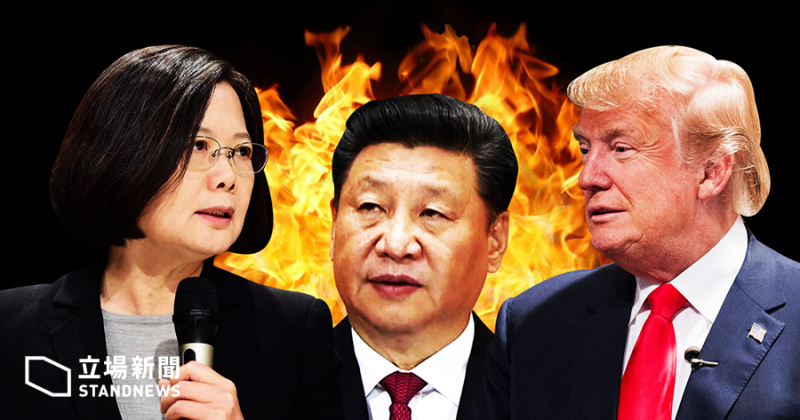 Image from the Standnews, non-commercial use.

US President-elect Donald Trump tweeted on December 2 that the president of Taiwan, Tsai Ing-Wen, called him to offer her congratulations for winning the US election — breaking with decades of US protocol. Shortly afterward, he questioned in an interview, “I don't know why we have to be bound by a ‘one China’ policy, unless we make a deal with China having to do with other things, including trade.”

As Wikipedia correctly explains, the “one China” policy refers to the idea that there is only one state called “China”, so countries that want diplomatic relations with the People's Republic of China must break official ties with the Republic of China (Taiwan) and vice versa.

We at FAPA are heartened to see President-elect Trump challenge the outdated “One China Policy”. Taiwan has never been a part of the People’s Republic of China.

However, Taiwan’s right to self-determination and democracy should not be a bargaining chip. Using Taiwan in any sort of “deal” with China is against the very ideals on which our nation is founded.

This statement reflects that many Taiwanese are unsure if Trump is just using Taiwan as leverage to negotiate with China, or if he really wants to re-evaluate the US-Taiwan relationship.

For example, June Lin, a policy fellow at the very same Formosan Association for Public Affairs, was annoyed by Trump putting the “one China policy” alongside possible trade dealings. She quoted Trump, then commented:

“I fully understand the ‘one China policy,’ but I don't know why we have to be bound by a ‘one China policy’ unless we make a deal with China having to do with other things, including trade.”
假裝很灑脫傲嬌 但交換條件講ㄉ蠻細ㄉ
「誰管你啊 ～除非你給我A跟B跟C，不然我才不理你ㄋ。」
如果這句話放在他的twitter大寫的字會是TRADE？？？？
真的是好煩啊….

“I fully understand the ‘one China policy,’ but I don't know why we have to be bound by a ‘one China policy’ unless we make a deal with China having to do with other things, including trade.”
Trump tried to be free and easy, but he is very specific about the exchange deal: ‘Who cares [about the the one China policy]?—Unless you give me A and B and C, or I won't give a damn.’
If his words were put on his Twitter account, I guess the capitalized word would be TRADE????
This is annoying…

As the geopolitics in the South China Sea and East China Sea changes, the US has moved seemingly more and more towards a new paradigm in manifesting its military strength. Under the administration of President Barack Obama, the US government has strengthened strategic ties with Taiwan. The US Congress passed the Taiwan Relations Act and the “Six Assurances” this April, which reaffirms Taiwan's position as an “important partner” to the U.S.

In May, when the US House of Representatives passed the military budget for 2017, there was an amendment that directs the US secretary of defense to grant Taiwan military forces observer status in maritime exercises known as the Rim of the Pacific Exercise. In addition, on December 8, the US Senate passed the annual defense policy bill, including a provision recommending that the US conducts yearly high-level military exchanges with Taiwan.

Though Trump's Twitter performance has been viewed as a more proactive move to reaffirm the strategic partnership, Taiwanese are still worried that Trump as a businessman is only using Taiwan to negotiate a better trade deal with China. Taiwan is a de facto independent country, but authorities in mainland China don’t see it that way — and so they don’t take kindly to moves they perceive as recognizing the Taiwanese government.

Unsure about the status of Taiwan? Read more: Is Taiwan a Country, a Self-Governing Island, or a Breakaway Territory or Province of China?

Furthermore, some Taiwanese were also aware of former US statesman Henry Kissinger’s presence in Beijing while Trump tweeted about his phone call with the Taiwanese president. To them, Trump's behaviors embody Kissinger’s philosophy of diplomacy, which centers on unpredictability. But would Taiwan be able to survive under such diplomacy, the same that saw the US bombing Cambodia, Laos, and Vietnam in the late 1960s into the 1970s?

Jou Yi-Cheng, a social activist and a former politician, also had concerns about Trump's fast pace on negotiating with China:

The development of the new US-China and US-Taiwan policy would take more time. The debate among diplomatic policy makers has not started yet. Mr. Trump has a fast pace and pushes the whole world forward with him. Mr. Trump’s business style is to clearly set the goal (i.e., trade) and to put the chip (i.e., Taiwan, one China policy) on the table to proceed with the bilateral negotiation (between the US and China but without Taiwan) as soon as possible. […]
Diplomacy needs to address idea and vision. Benefit is the core, but it cannot stand alone. Ideology and concrete interest work together. [Without the ideological discourse] the legitimacy of the US will be weakened, and trouble follows.

If Trump is trying to use Taiwan as a bargaining chip, China doesn't seem interested in playing. For Chinese politicians, Taiwan is considered to be one of the utmost core interests of China, not to be bargained. They actually might rather negotiate with Taiwanese for a new cross-strait framework since when it comes to Taiwan they have much more to offer (or to threaten).

Some Taiwanese, however, believe that crisis is an opportunity even if Taiwan is used as a chip in US-China negotiations. Yu-His Liu, an economics researcher, said:

We should not be afraid of being used by other people if we want to survive in the world. If no one wants to use you, you should be worried. When we talk about making a deal, the most important thing is whether both sides benefit from the deal and get what they want. Taiwanese should not be complacent, but we should not surrender to defeatism and blindly refuse to enter the game. Instead of being fearful, better take changes in our stride. […] We need to know what we want. […] We need to remind ourselves that we cannot fall into a dichotomy of categorizing everyone as either good or bad and letting the strategy of “all-or-nothing” guide our actions.

A user named Azuel analyzed the situation on PTT, the most popular bulletin board system in Taiwan, and his comment echoed with Liu:

Taiwan needs to be very, very careful with every step as we step on the fragile ice.
Taiwan is the fulcrum. It can support the balance, but a small misjudgment would upset the balance.
Calculation is needed based on the new situation we face every day. There is no unchangeable season.
To summarize, this first card can be considered to be a good one in the foreseeable future, but we need to observe the facial expressions of all the players carefully when the cards are lifted one by one.