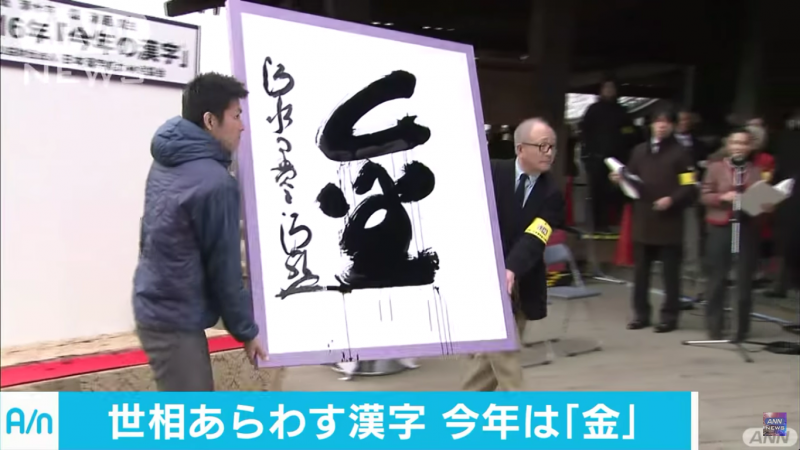 The Chinese character kin (金) has been named the kanji that best symbolizes the year 2016 for Japan. Screencap from ANN News official YouTube Channel [1].

This year's kanji was selected by the Japanese Kanji Proficiency Society [3] (財団法人日本漢字能力検定協会. Zaidan hōjin Nihon Kanji Nōryoku kentei kyōkai), based on the results of a nationwide poll. More than 150,000 people from around Japan voted on a list of kanji, and “gold” ranked first, with 6,655 ballots.

In its news release, the Japanese Kanji Proficiency Society [4] explained that “gold” was a suitable representative kanji for the year 2016 because of Japan's performance at the 2016 Rio Olympics, where the country won 12 gold medals. The kanji “金” can also be read as kane, or “money”, which played a role in the downfall of former Tokyo Governor Masuzoe Yoichi, who was forced to resign in 2016 because of an expense scandal.

The Japanese Kanji Proficiency Society recorded various comments [4] by voters about why they thought ”金” should be the kanji of the year. Some cheekily explained [4] that US President-elect Donald Trump's “golden hair” was also part of the gold theme of 2016.

The 2016 kanji of the year was unveiled at Kiyomizu Temple in Kyoto, and was a major news event.

Which Chinese character did Japan choose to represent the past year? This year it's the character for “gold.” (At Kiyomizu Temple)

Japanese voters sent in suggestions for kanji of the year. After “gold”, number two on the list was “選”, which means “select”, “choose”, or “vote” — possibly a reference to the US elections in November. Number three was “変”, which means “strange” or “unusual”, much like Donald Trump's hairstyle, or the surprise results of the Brexit vote in the UK in June.

The eighth and ninth most popular 2016 kanji characters on the list also attracted some attention. When added together, the two form “不倫” (furin), the Japanese word for “infidelity”.

While the 2016 kanji of the year, “gold”, has something to do with the Olympics, the eighth and ninth characters, when combined together create “infidelity”, and certainly stand out.

Japanese netizens had fun with kin being the kanji of the year. For example, it is the family name of North Korean supreme leader Kim Jong-un (金正恩 [10]).

The fact that kin is the kanji of the year has made a certain supreme leader very happy.

Other Japanese netizens discussed the fact that the official calligraphy used to represent kin is somewhat hard to read. A promotional Twitter account for popular web series [13] Eagle Talon [14] (秘密結社 鷹の爪) made a clever parody of the 2016 kanji announcement:

The 2016 kanji of the year is “gold”, and I don't mind saying that I can't read the calligraphy at all! It seems like it was just dashed off as soon as the announcement was made.

Another Twitter user suggest that “carp” (鯉, koi) be made the 2016 kanji of the year, after the Hiroshima Carp baseball team won their first Central League pennant since 1981 [21]. In the photoshopped images below, Carps slugger Arai Takahiro sneakily makes the kanji for “carp” the character for 2016:

Arai was just not satisfied with the choice for kanji of the year.

Is this perhaps from Kyoku Shimbun [a satirical news site [29]]?