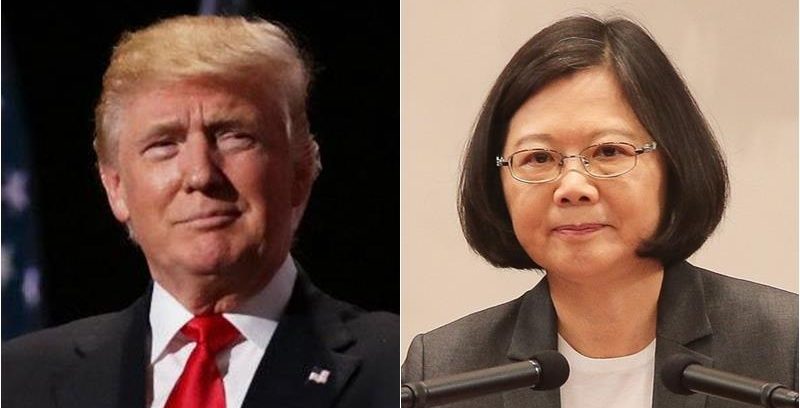 Donald Trump, the next president of the United States, surprised Taiwanese on Dec. 2, when he tweeted about a congratulatory phone call he'd received from Taiwan's president, Tsai Ing-Wen.

The President of Taiwan CALLED ME today to wish me congratulations on winning the Presidency. Thank you!

Due to the “one China” policy in diplomacy, Taiwan has been isolated from the international scene for decades, at least officially. After Trump's tweet, the number of Google searches for “Taiwan” spiked worldwide, tripling in some places. Furthermore, for many people around the globe, Trump's decision to refer to Tsai as “the President of Taiwan” signals American recognition of Taiwan as an independent democratic country.

Capturing the mood sarcastically in The Atlantic, Isaac Stone Fish wrote, “[T]he island once had a seat on the U.N. Security Council. Now a simple phone call with its leader is international news.”

In an interview with Fox News anchor Chris Wallace, Trump elaborated his position on China and Taiwan:

I don't know why we have to be bound by a “one China” policy, unless we make a deal with China having to do with other things, including trade.

This, again, surprised Taiwanese. For decades Beijing has used the “one China” policy to break other countries’ official ties to the Taiwanese government while they want to establish diplomatic relations with the People's Republic of China.

Netizens in Taiwan expressed concerns that President-elect Trump is only using their country as a negotiating chip with China, but some say the next U.S. president's scheme could give Taiwan the opportunity to improve its standing internationally.

Some Taiwanese netizens complained about being bullied by the international community, following the response of the outgoing Obama administration and the world mass media to the tweet, which warned that Beijing would be enraged, and the possibility of damaging U.S.-China relationship — all before the Chinese government even issued a formal statement on Trump's comments. 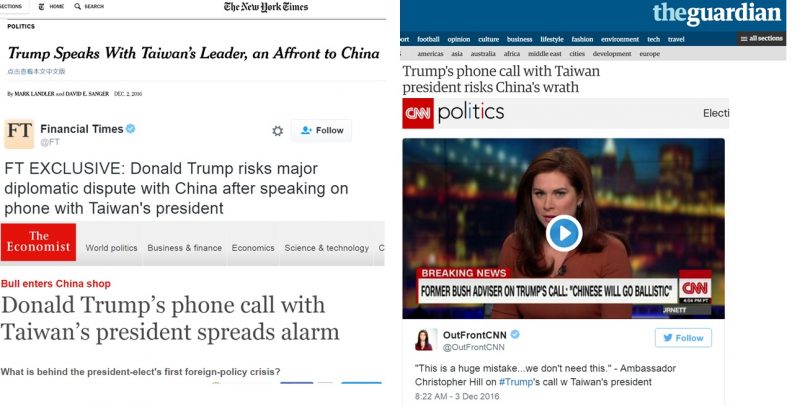 A sample of the headlines right after Trump's tweet.

Taiwanese netizens criticized the international media for being so quick to focus on Beijing's diplomatic line without describing the voices from Taiwan.

Lin Fei-fan, the co-founder of the “Taiwan March” activist group and one of the student leaders during the 2014 Sunflower Movement, wrote on Facebook after his article was published in The Washington Post:

What we want to express at the end of this article is very simple: The meaning of this phone call is positive, because it provides a chance to re-evaluate the Taiwan-U.S. relationship. […] It's a pity that many mainstream liberal media outlets, including The New York Times and CNN, immediately rushed to warn the world that “this will enrage China” — even before China responded to the incident. Until now, we only saw reports about the responses from Chinese scholars and citizens, and we rarely see reporters interview Taiwanese people about their opinions.

Michael Turton, a popular blogger in Taiwan, also expressed his concerns about the foreign media's reactions to Trump's tweet:

One way to read the media brouhaha is to observe how incompetent the media is, and how it does Beijing's work for it in referring to tensions that don't exist. […] But there's another way to think about it: the media are also signaling China about how it could/should react. If China doesn't react strongly, the media won't be validated (they will then say nothing about their failure). […] In other words, congratulations, media, you just gave China permission to go to its limit. […] China chooses actions that play the western media for publicity, but have little concrete effect. They've learned well from the international media…

In the end, Beijing reacted as the mass media anticipated, except there was a small twist: the Chinese government's response to the White House was restrained, and they did not even bother arguing with the U.S. President-elected; Instead, they blamed Taiwan for what happened. On Dec. 10, Chinese military aircraft flew over the East China Sea and circled international airspace surrounding Taiwan.

China's Air Force has performed similar stunts in the past one year, but the timing of this latest operation appears to be a clear response to the phone call between Trump and Tsai. Financial experts, for example, were quick to connect the two events. A financial journalist based in China, Emmy Hu pointed out on Dec. 5:

This morning, the Shanghai Stock Exchange Composite Index dropped by 1.3 percent, and only those related to military industry went up. Interestingly, everyone knows why they went up, but no commentator dared to say the truth. Some commentators even tried to find a reason like “the Shenzhen-Hong Kong Stock Connect led those related to military industry go up.”
#Large-scale exercise in the South China Sea will begin

In addition to the military threat, the daily Chinese newspaper Global Times suggested that Beijing should punish Taiwan by forcing its allies to break diplomatically. In March, China's pressure led Gambia, a West African nation, to end diplomatic relations with Taiwan and establish formal ties with China, two months after Tsai won Taiwan's presidential election. More recently, China has approached Panama and Vatican. Considering that Taiwan has formal diplomatic ties with just 22 countries, this is definitely not good news.

Facing the threat in the military side, diplomatic side, and economic side from China, some Taiwanese expressed panic, but others say they're ready to brave further pressure from Beijing.

Pingjen Chen responded to a report published in the Economist on cross-strait tension over Trump's tweet:

Before this phone call, we were already trapped because of China’s pressure. Now, we're so used to the boiling water that we can actually swim in it, regardless of the temperature.

In January, as a warning to Taiwan's newly elected president who is challenging the One-China Principle, Beijing implemented several punitive measures: closing all communication channels with the Taiwanese government, taking steps to weaken the country's diplomatic standing internationally, and discouraging Chinese tourists from visiting Taiwan.

Chinese officials also isolated Taiwan by denying its access to the International Civil Aviation Organization summit in Montreal this September, as well as a meeting of Interpol's General Assembly in Indonesia a month later.

Overall speaking, the ‘Status Quo’ between Taiwan and China has been biased toward the China side, especially in the past one year. Therefore, the response of the foreign media to Trump's tweet again represented this imbalance and seemed to Taiwanese to be an insensitive response of international bullying.