Syrian Media Activist: ‘It Is Terrible and Scary, Aleppo Has Become a Horror City’ 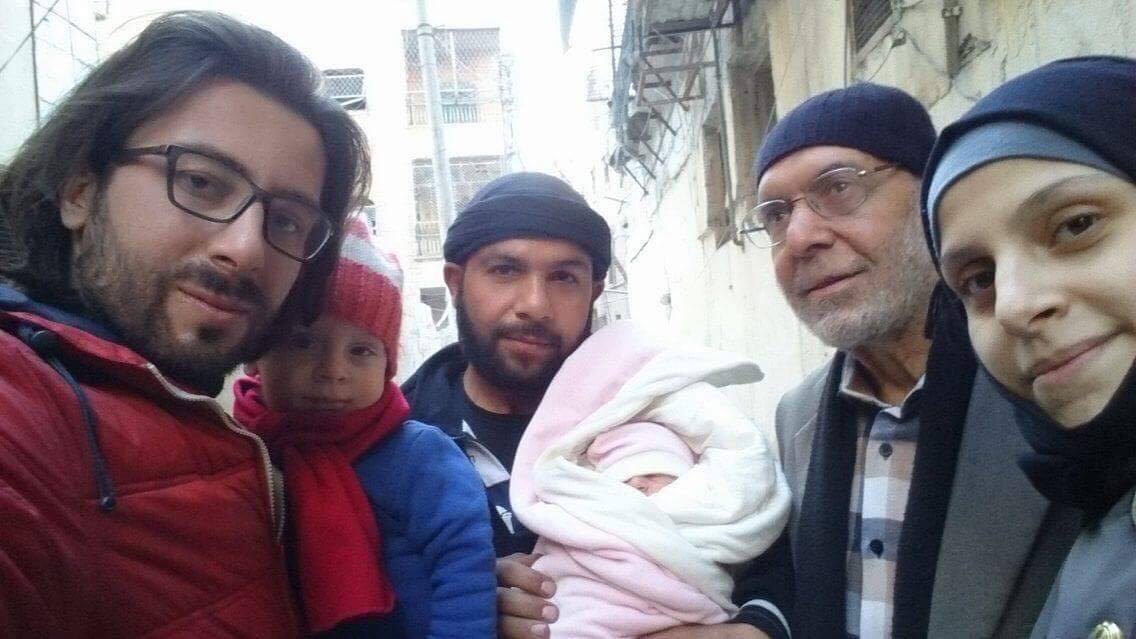 Gnaid, center, with his newborn daughter and family. Used with permission.

“Aleppo is alive and will not die!”

This is what video journalist Gnaid wrote on Facebook when he announced the birth of his little daughter, his second child, on Thursday, November 24, 2016.

Gnaid works for the media activist group Aleppo Today providing daily news and also works together with Aleppo Media Center (AMC) in eastern Aleppo city in Syria. He has intermittent internet connection via satellite and is only able to communicate with Global Voices that way. He lives with his wife, his young son, his newborn daughter and two of his relatives.

Both children were born and are growing up under siege. Earlier last week, Gnaid told Global Voices in a series of communications that the Syrian regime's forces were only a couple of kilometers from his house and that panic has taken over the civilians and the media professionals who are still in eastern Aleppo.

At the time of writing, forces that support President Bashar al-Assad are reported to control most of East Aleppo, having made quick advancements in recent days under the cover of Russian bombardment and the large support of Iranian-backed militias. Since 2012, the city has been divided between rebel-held East Aleppo and regime-held West Aleppo. The first barrel bombs to have been dropped by the regime over Aleppo were in December 2013 and since then, many forms of weapons have been used, from chemical weapons to cluster bombs, leaving the eastern part of the city in complete ruins. A brutal siege was then imposed by the regime in July 2016 as it declared its intentions to retake eastern Aleppo within months.

When Gnaid and his family assessed the possibilities of leaving eastern Aleppo, they found many obstacles. Going to neighboring Turkey is difficult, and areas of Syria that are held by the regime are dangerous for media activists who fear arrest, torture or even death. Gnaid remarked that only if he surrendered and held a portrait of Assad he might survive, but his pride and dignity would not allow it. It is too humiliating for him, he told Global Voices. So Gnaid and his family decided to stay in eastern Aleppo and continue.

“Tonight, the bombings are very heavy” Gnaid said on Wednesday, December 7. “It is terrible and scary, Aleppo has become a horror city.” He accused the international community of having “a lack of humanity”:

My wife and I don’t have passports. We cannot travel, but we could keep ourselves alive here in Aleppo, even during the siege. There has to be a solution now. It’s our right to live in dignity and freedom, just like all people in this world. But unfortunately our voice is not heard over the sound of the weapons! An enormous number of people have lost their houses and are driven away by the violence and the bombs. Maybe our neighborhood will return to the regime. But we will hold on to our land! The shame is on the United Nations and all international organizations who could rescue the wounded but simply refuse to do so!

Gnaid then sent another message:

The situation is terribly difficult. I don’t know what to say. I am looking at the people. I do not want to leave. I do not want to leave Aleppo. I am tired and utterly exhausted. But there is nothing else to do for me than to stay. This is my land. There is nothing else for me than Aleppo. I don’t know what to do anymore. It’s in God’s hands.

Finally, on Thursday, December 8, Gnaid sent what he thought would be his last message.

Half an hour ago the fighting started here. There is an enormous panic. Especially with the children. It is very very difficult now. There are rocket attacks by the Syrian Army. Soon there will be a battle now.

Fortunately, he managed to send a short audio note to Global Voices on the morning of Tuesday, December 13, saying:

We are okay thankfully. We're still waiting to see what's going to happen to us.

Meanwhile, his colleagues at the Aleppo Media Center uploaded a 360-degree video to show the wide-spread destruction of the area of Al Shaer neighborhood in eastern Aleppo.

For Gnaid and his family, the international community is doing nothing to stop the bloodshed. The only hope now, he says, is that he and his family can get out safely to the remaining opposition-held areas, hoping that the warplanes don’t follow the people there eventually.