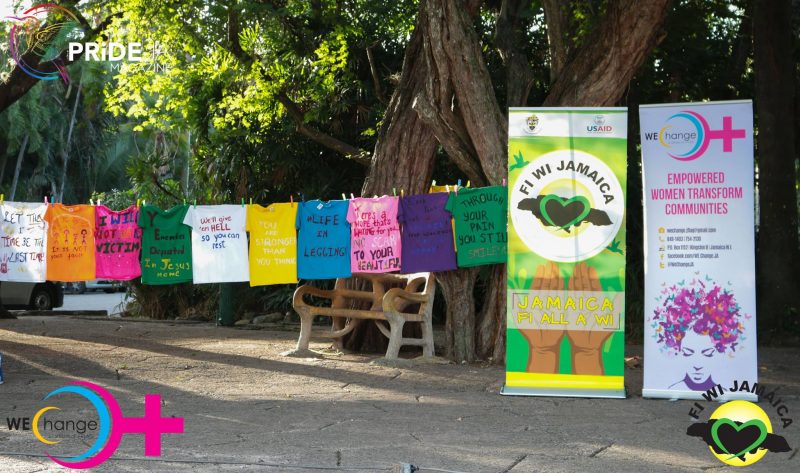 T-shirts and banners emblazoned with anti-gender-based violence messages at the #Beyond16Days Awareness Walk in Hope Gardens, Kingston on December 11, 2016. The event was a partnership between WE-Change, FiWiJamaica and Mary Seacole Hall's Clothesline Project at the University of the West Indies’ Mona Campus. Photo by PRIDEja Magazine, used with permission.

As the United Nations’ 16 Days of Activism campaign drew to a close on International Human Rights Day, there remained much to be concerned about in Jamaica in relation to the issue of gender-based violence.

This was highlighted by the case in early December of a 14-year-old girl, who was abducted in Kingston and raped. When she reported her ordeal to the police, they drove her to the house where the crime was committed, and transported her back with the alleged rapist in the same police vehicle. On arrival at the police station, the man mysteriously escaped, allegedly because of a pair of defective handcuffs.

The incident not only pointed to the ongoing problem of the sexual abuse of under-age girls — which, according to Joy Crawford of the non-govermental organization Eve for Life, has not diminished — but also raised serious issues about how the police treat rape victims.

Blogger Dennis Jones spoke bluntly on the issue, seeing it as an example of police inefficiency and incompetence. In a letter to the editor, he wrote:

A 14-year-old is raped, and a suspect is caught, and the two people are transported TOGETHER to the police station. What could go wrong? Everything! And it did. The culprit escaped from a set of defective handcuffs. Result: a traumatised family and a police force with a severe case of egg on face.

He amplified the issue in his blog, concluding:

People have in their sights an escalating murder rate, but my concern is that the many little things that the police are supposed to do daily and in dealing with a wide range of matters of public order keep showing them up to be less than competent. For an economist, it would be an easy thing to argue the the function of policing ought to be taken away from the body that is now in charge of it.

Governments, rightly, are wary of tampering with police powers, but at some stage, with any organization, one has to ask if the present set-up can take you where you want to go.

Human rights activist and blogger Susan Goffe reflected that this reported case may well be the tip of the iceberg, as many instances of rape are not reported:

@Petchary @RossSheil We now know of this case; how many similar cases are there that we don't know about. Frightening.

In a blog post on the UNICEF Jamaica website, young lawyer Adley Duncan shared a long series of his own tweets that describe the exhausting, traumatizing procedure that begins when a person reports a rape. He prefaced the list by saying:

Many girls (and boys) find themselves in cycles of sexual abuse. It is a horrendous rite of passage for many young persons in Jamaica. Some of the people we know, even our friends, might be fighting personal battles they feel unable to speak about.

Child victims of abuse grow into adults, bearing the abominable consequences of harm. They are, throughout their lives, reminded by triggers of the abuse they experienced, often at the hands of adults responsible for protecting them.

Statistics from the Office of the Children’s Registry suggest that only one adult in ten reports child abuse brought to his or her attention. The 9 in 10 who make no report reflect the pernicious Jamaican culture of silence.

My involvement in the justice system as a criminal law practitioner gives me some familiarity with some harsh Jamaican realities for children.

This year, the UN's 16 Days of Activism campaign was particularly active in Jamaica, with many events reflecting different aspects of violence against women. Yet, although the specified period is over, the undercurrent of gender-based violence persists, regularly surfacing in the media. One Jamaican woman tweeted:

Contrasting the response in Jamaica to the increase in violence against women and the soaring crime rate in general with the reaction in neighboring Trinidad and Tobago, blogger Annie Paul shared on Facebook:

What's remarkable to me is how Trinis are mobilizing against high murder rate in their country, motivated by yet another killing of a young woman whose body was discovered a couple of days ago while we do…NOTHING but make excuses about men being abused [too]. Where are the battered, murdered male bodies pray?! 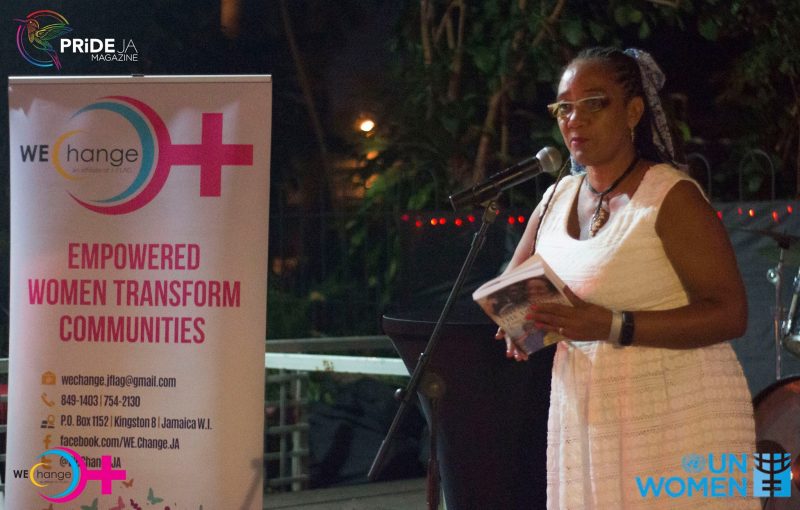 Tamika Pommells-Williams, a survivor of gender-based violence, speaks at the WE-Change “Orange Lights” event at Devon House in Kingston, on December 4, 2016. Photo by PRIDEja Magazine, used with permission.

While Gender Affairs Minister Olivia Grange expressed outrage at the size and persistence of the problem, non-governmental organizations such as WE-Change organized a series of special events, tweet chats and more to raise awareness on social media and beyond.

Among these, at the second edition of “Orange Lights” (a storytelling event co-sponsored by UN Women's Caribbean office), survivors of gender-based violence shared their stories through poetry, prose and song. Tamika Pommels-Williams, a Jamaican gender-based violence survivor and author of the recent book “Unearthing the Diamond” in which she recounts her childhood trauma, shared on Facebook and thanked the media for its support:

I am really happy to see the media highlighting Unearthing The Diamond and by extension the elimination of violence towards women and girls […] there is a change in the air. Finally this taboo topic is being highlighted. Spoken about in public and giv[ing] women in hiding a voice. […] No need to stay in hiding. I am free at last. It is great to be in the open. 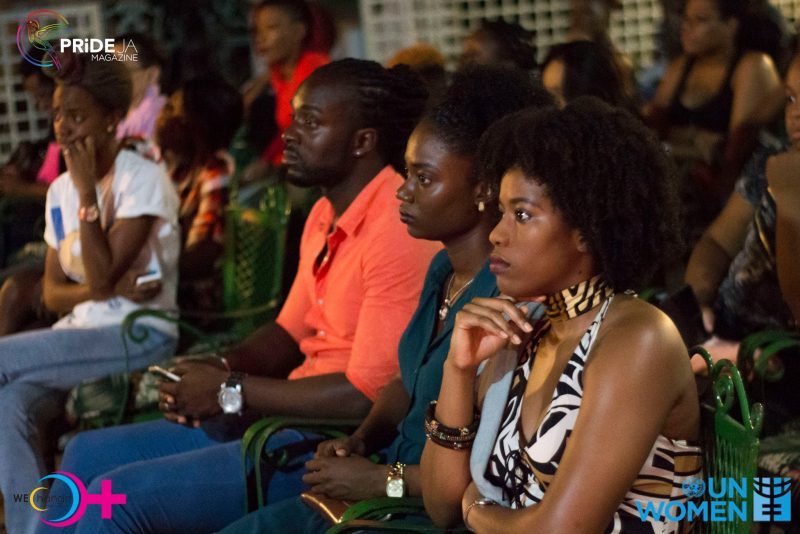 Members of the audience listening sadly to the many accounts of violence against women and girls in Jamaica. The “Orange Lights” event was held by WE-Change at Devon House in Kingston. Photo by PRIDEja Magazine, used with permission.

Nevertheless, there is much work to be done. In acknowledgement of this, a #Beyond16Days hashtag seemed appropriate for Jamaica and elsewhere. WE-Change held a Violence Against Women Awareness Walk in Hope Gardens on Sunday, December 11, 2016. PrideJA Magazine tweeted:

Trends #PRiDEJARadio is loving: #Beyond16Days – A call to raise awareness about violence against women beyond the 16 days of advocacy

Meanwhile, the Office of the Children's Advocate says it is investigating the rape of the girl and the police handling of the matter.