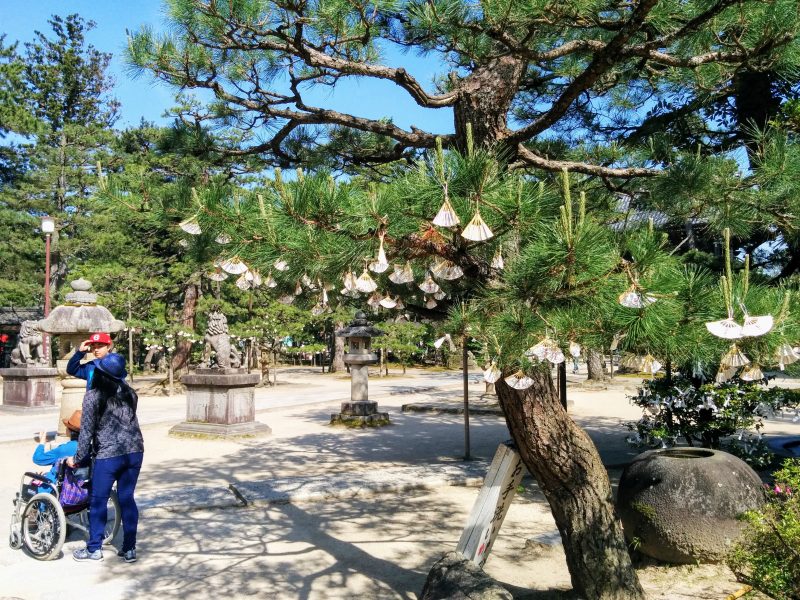 Chion Temple grounds at Amanohashidate, Kyoto, Japan. There is little to no information online in English about accessibility, and hotels in Japan reportedly do not easily facilitate accessible rooms to be booked online, requiring long phone calls instead. Photo by Nevin Thompson.

Part of the surge in tourism in recent years is thanks to the easing of visa restrictions on visitors [4] from the People's Republic of China, which represents the single largest source of tourist visitors [5] to Japan. Visitors from other parts of the world have also been attracted to Japan thanks to savvy marketing campaigns [6] aimed at demystifying travel in a country that, thanks to limited information in English and other languages, can be hard to decode.

One community is still somewhat in the dark when it comes to planning a trip to Japan, however. For potential tourists to Japan who live with and experience disabilities, there is little to no information online [7] in English about accessibility at most tourist sites, while hotels in Japan reportedly rarely make special-access rooms available to online bookers.

Accessibility Japan [8] aims tofill the information vacuum. The website provides English-language reviews of hotels and attractions all over Japan, as well as detailed updates about accessibility [9]. The website offers information about everything from how accessible Japanese trains are [10] and guide-dog regulations in Japan [11], to common questions every tourist has, such as questions about Internet access in Japan, and simple Japanese phrases for visitors [12].

The site features gorgeous photos, as well as accessibility reviews [13] of many of Japan's most famous landmarks, such as this one of the iconic Kiyomizu Temple in Kyoto, Japan's old Imperial capital:

The Accessible Japan website was created by Tokyo resident Josh Grisdale, who describes himself as “a guy with cerebral palsy in a power wheelchair that lives in Japan.”

If you are looking at this website, then we likely have something in common – disability. Accessible Japan came into being from a combination of both good and bad experiences of traveling in a wheelchair. The creator has extensive travel experience with an electric wheelchair. An adventurer at heart, he hates to hear “impossible” and relentlessly ventures forth… but he is a worrywart at heart and likes to gather as much information as humanly possible beforehand.

Grisdale appears in a Life in Japan [18] vlog that examines accessibility on Japan's public transportation networks.

Accessible Japan also acts as a community hub and a place to learn about and discuss the role of people living with disabilities in Japan.

There is also discussion about issues such as the June 2016 targeted knife attack [21] on residents of a care home on the outskirts of Tokyo that left 19 disabled people dead and 26 injured, and the extreme inaccessibility of Japan's national Diet building (legislature) is:

The blog also provides insights into the lives of Japanese people living with disabilities, such as this English-language interview with Yuriko Oda [27], president of Japan's PADM (Patients Association for Distal Myopathies) [28], an organisation that has its own YouTube channel, Wheelchair Walker [29].

Accessible Japan is always looking for more information [30] to share with its readers, and is actively seeking out people who have a disability and who have traveled in Japan to submit blog posts [31] about their experiences. If you have any questions about traveling in Japan, feel free to contact Accessible Japan [32] as well.