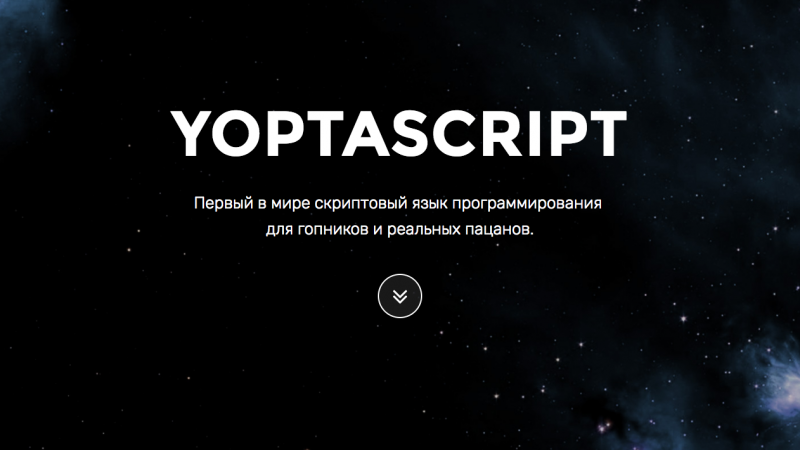 On December 5, a group of students at Saint Petersburg's College of Information Technologies launched a parody programming language designed for “streetwise” computer science students struggling with traditional languages like JavaScript and C++. As reported by the news website TJournal, Semyon Gozman, Mikhail Belozerskiy, and Georgiy Mkhitaryan came up with“YoptaScript,” which appropriates Russian slang to make it easier for street-educated students to understand, after noticing that many of their peers had not learned a single programming language by the time they graduated. Gozman told TJournal that the majority of his classmates could be described as “chotkiye patsany,” an idiomatic phrase that can be roughly translated as “streetwise kids,” and that some are even “gopniki,” or urban “thugs” whose vernacular is famously crass.

YoptaScript is translated into JavaScript using a special dictionary: JavaScript keywords, methods, and operators are replaced by words that “gopniki” might use—and it goes without saying that many of these words are profane. For example, in YoptaScript “if… else” is replaced by “вилкойвглаз… иливжопураз,” an idiom describing a tough choice that directly translates as “a fork in the eye… or one in the ass.” While JavaScript uses a semicolon to divide statements, in YoptaScript they are divided by “нах,” a shortened version of “f**k it,” which gopniki are stereotyped as using in and between every sentence.

The creators of YoptaScript emphasize that the language works well with different street dialects: “==“ (equals), for example, can be replaced with “ровно” (“exactly”) or “однахуйня” (“same s**t”). More details about YoptaScript are available on the project's GitHub page.

Though Gozman, Belozerskiy, and Mkhitaryan created YoptaScript, now that the project has attracted media attention across the country, the project now includes seven people.“Yopta,” a crass exclamation commonly used by gopniki has been surprisingly successful thus far: as of December 9, the language's website, Yopta.Space had 120,000 unique visitors.

The main difficulty that we’ve encountered has been expanding the vocabularies of our “Ellochka-lyudoyedkas” [Ellochka-lyudoyedka is a famous character from Ilf and Petrov’s satirical novel 12 Chairs who only used 30 words to express her thoughts – GlobalVoices] to 600+ expressions. It took us some two weeks to figure out how to make this filthy language more structured.  It was awful, because no one on our team can tolerate this kind of language on a daily basis.

Though Gozman insists that his team isn't trying to make fun of anyone and that the project is strictly educational, it's clearly parodic. And Gozman seems to have a good sense of humor: in addition to claiming to be a pastafarian, he is seen wearing a Peppa Pig knitted cap in almost every picture on his Vkontakte page.