Refugees in the US Keep Musical Traditions Alive With Kids’ Songs 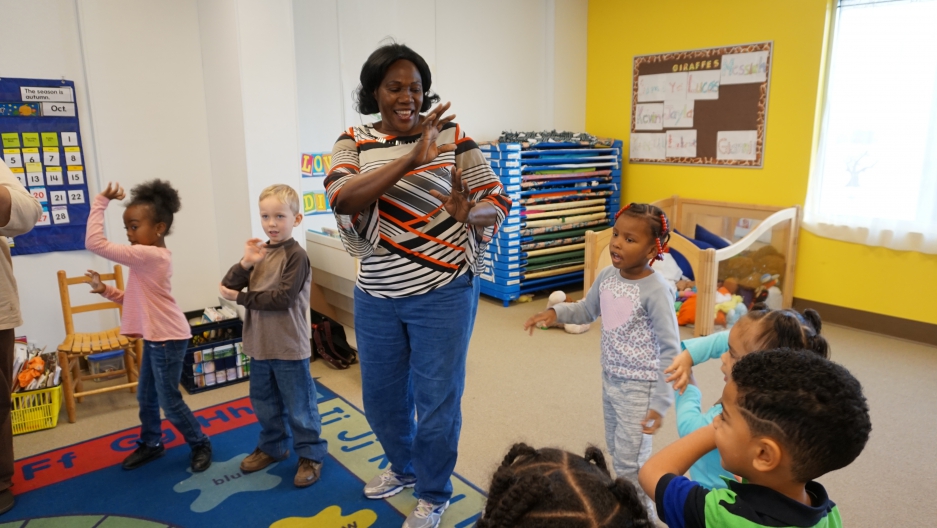 This story by Erika Beras originally appeared on PRI.org on December 5, 2016. It is republished here as part of a partnership between PRI and Global Voices.

Marta Sam is surrounded by really energetic 4-year-olds. She’s at St. Martin’s Day Care in Erie, Pennsylvania, guiding the kids as they sing and dance.

Sam sings in Arabic, then English. She takes the students through a Congolese song, followed by “Five Little Monkeys Jumping On The Bed.” The kids follow her cues, dancing and calling out their favorite songs. Sam is used to this.

Sam, 59, is a roving educator at St. Martin's Day Care. She goes from room to room and sings lullabies from all over the world with the kids. Originally from South Sudan, she came to Erie 13 years ago as part of the first wave of thousands of refugees who have resettled in this small Rust Belt city.

She worked at a plastics factory and started learning English. Then she heard she could get job training to work in day cares. In return she’d share the traditional songs she had sung to her children when they were young.

It was just what she needed.

Sam works at St. Martin’s because of Old Songs, New Opportunities, a program dreamed up by Kelly Armor, a folklorist and educator at the Erie Art Museum. Armor is from Erie, but spent time in the 1980s studying traditional song in Kenya and Tanzania. When she noticed refugees settling in Erie in recent years, she had an idea.

“Could it be that … there are refugee women that are, would love to work with small children? And could it be that they know lots of songs and they know how to use songs with kids?” she wondered.

It turned out they did, and in some cases the songs were all they bought to the US. That was the case for Victoria Angelo, who is also from South Sudan.

“I was not able to bring anything. No dishes, nothing, no [clothing],” she says. “What I actually brought with me was the songs.”

But in some ways the songs represented everything that was missing. 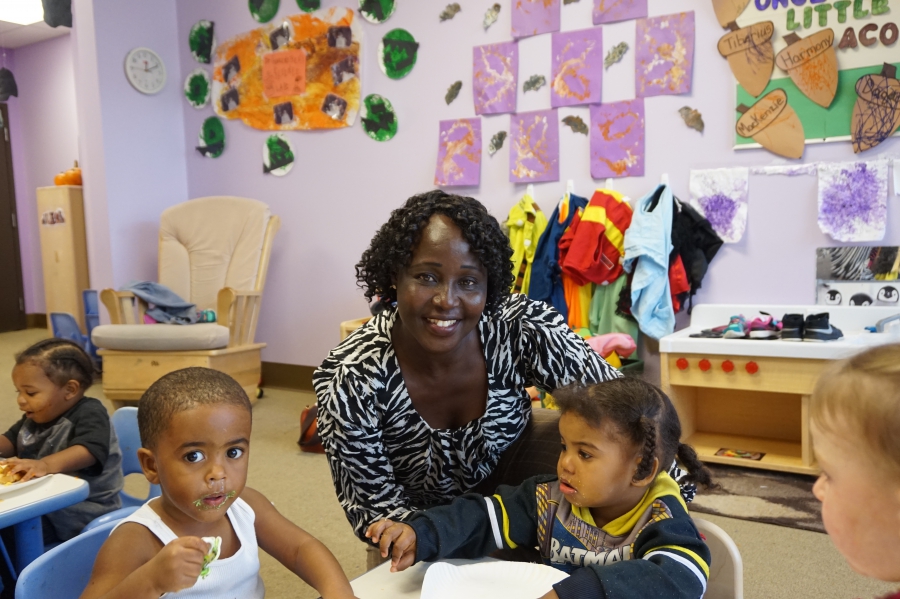 Victoria Angelo and some of the toddlers she works with. Credit: Erika Beras

Armor, the folklorist, got funding to train women like Angelo and Sam so they could get jobs in child care. Then, just as she had done in Africa, she collected and translated their songs.

Combining job training and musical tradition has been so successful, the museum released a CD. Angelo sings some of the songs, like the one from the Acholi people that is sung when a child begins to toddle.

In the United States, some of the most popular children’s songs already come from overseas — think “London Bridge Is Falling Down” or “Ring Around The Rosie.” But every country and culture has these types of songs, and with migration and assimilation, they can be lost — or gained.

Armor has archived nearly a hundred songs from almost as many countries and cultures. They're about everything — animals, emotions, experiences.

One Nepalese song is about climbing mango trees at recess to pick ripe fruit.

“But at the end of the song the bell rings and you don’t get the mango,” she says. “I think of that as kind of, well there you go, there’s an eternal truth. Recess will never be long enough. And sometimes you don’t get time to eat that mango.”

Here is a selection of the songs from the CD “Simba La La: World Music for Children,” courtesy of the Erie Art Museum.

This song is about the green fly, an insect found in South Asia. It lovingly describes the fly and then proclaims the fly is better when its outside:

When Congolese children sing this, they flap their hands on either side of their head:

This song is similar to the classic American children's song “I’m A Little Teapot“:

The English translation of this song uses locations in Erie that the children will recognize: