Paraguay, Where Opening a University Is Easy, but Finishing a Degree Is Hard 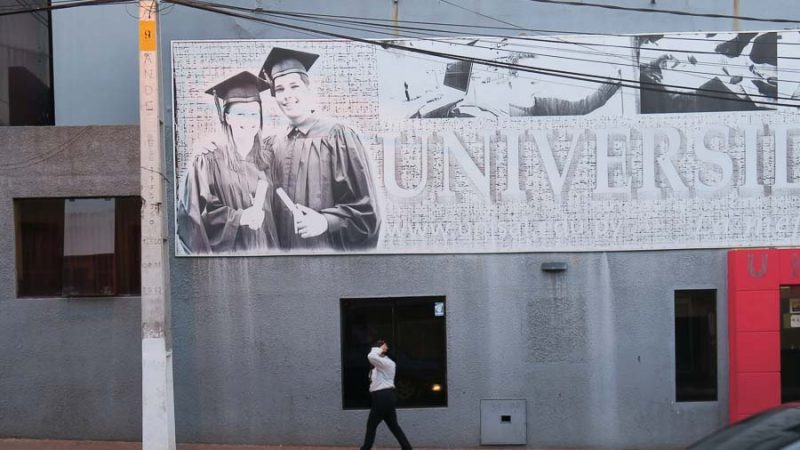 “Eight out of every 10 students in Paraguay are faced with universities that increase fees and discontinue degrees without prior notice.” Photograph published by Kurtural and used with permission.

Below is an edited version of an article by Paraguayan economic and cultural news site Kurtural. It is part of the series “Cows that fly, schools that fall” that has been re-edited and republished by Global Voices Latin America. The original version of this article in Spanish includes more extensive testimonies and an explanation of the historical and political background of the Paraguayan education crisis.

“I am selling a first-rate, operational private university due to travelling abroad.” The advertisement appears in Clasipar, a popular Paraguayan classified ads site. When I call the contact number, the guy who answers confirms to me that the offer is real. Seconds after, we agree to meet up.

The representative of the owner of the university being offered is an elderly man, with a bushy white moustache and thick glasses that hang from a string around his neck. He brings a folder filled to the brim with papers to the table. He says that he is retired, but that he opened a consultancy for commercial representations of this kind. Better than sitting alone on a sidewalk, awaiting death, as a lot of the population of his age do. It is not the case for Miguel, of course, who still goes through life selling things. A university, in this case. Through the internet.

Miguel opens a folder full of papers: there are copies of the university charter, the number of students, the courses, the financial balance, etc. “This information is somewhat outdated, from a couple of years ago, but it's to give you an idea”, he says.

The university that Miguel is trying to sell — for almost two million dollars — with out-of-date information, operating today in a single rented venue, and according to the information delivered, with 365 students and 27 authorized degree courses in 2013, is the Universidad Central del Paraguay (Central University of Paraguay), or UCP. The institution rents a beautiful but not very big house on Brasilia Avenue, near the Universidad Americana (American University), another private university.

The UCP is one of the more than 50 private universities operating in the country. An investigation carried out by the newspaper ABC Color indicates that it originated as the business of a group of Paraguayan officials from the hydroelectric power plant Itaipú. The shareholders of the university, previously public officials, had their own businesses, with capital of a few million guaraníes, like a shoe shop or a haberdashery. However, they had the capacity to register a university with a capital of approximately 180,000 dollars.

The UCP was founded by law in Congress in the year 2006. It was registered in public records in March of the following year. Eight days after, before even beginning to operate, it was already awarded its first set of grants from Itaipú hydroelectric. Those were the years of the market explosion of private universities in Paraguay.

Universities paid by the poor

In Paraguay, the poorest people generally do not go to public institutions of higher education. They pay to study in private universities. Admission to public university is difficult for multiple reasons. For example, the offer is territorially limited and entry costs are high. Furthermore, the timetables for courses like engineering or medicine prevent working while in school, an obligation for those who need to earn money to support themselves.

But this phenomenon is not exclusive to Paraguay. A study by UNICEF shows that in a number of countries, the allocation of public resources for educating the most well-off 20% of the population is up to 18 times more than what is invested in educating the poorest 20%. The business of private universities is maintained by the necessity of hundreds of thousands of poor families who suffer the absence of the state and the recurrence of separation due to migration. They try to fight against it with education. Meanwhile, the country's resources are used to strengthen inequality and the power of the privileged classes.

In 2007, Congress created a new university on average every 40 days — a total of nine that year. By 2013, there were now 54 universities in existence. The business of private universities continues to expand, although no longer through the founding of new universities by law, but by accentuating a method that fulfils the same function: the sale of franchises. Gerardo Gómez Morales, when he was deputy minister of higher education, said in an interview about the way in which universities were being set up:

Those who bought the rights to use the name of the universities were people who had a technical college or a small computing academy. It's the same as opening a local McDonald's; like business franchises, subsidiaries of universities and colleges were opened.

In 2012, the deputy minister of higher education shared this in a report on the collateral damage of the private university business model: only one out of every 10 young people who begin a university course finish it. In 2006, almost 115,000 young people signed up to do a tertiary degree course. Four years later, just under 13,000 graduated. Parallel to almost no one completing their studies, nine new universities were formed, and more and more young people set out in search of the professional dream.

By 2012, there were more than 300,000 students enrolled. Out of all of them, eight out of 10 were students of private institutions. Today, the government admits that they do not have precise information on the number of university students that exist in the country.

It is true that some students abandon their course halfway through it, and it is normal for desertion to occur in any major. But the remaining students who have the intention of continuing their studies might not be able to do so because the university cancels the course. The institution abandons the student in this case.

When higher education becomes a trap

Vanessa Lezcano has decided not to migrate, although she has had opportunities and reasons for doing so. She lives in Choré, a small town situated in San Pedro, one of the poorest departments of the country. She completed two years of a business degree at the Universidad Técnica de Comercialización y Desarrollo (The Technical University for Commerce and Development, or UTCD in Spanish), but the courses were then cancelled for not having the required number of students. The institution needed a minimum of 10 students; in her fifth semester, it no longer reached that number. The administration told her that if at any time a later group meets the quota, she will be able to join and study the second half of the degree. This was already a few years ago.

Eventually, she was able to complete the degree at the Universidad Politécnica y Artística del Paraguay (Polytechnic and Artistic University of Paraguay, or UPAP in Spanish) and is now just waiting on a date to present her final essay. The number of students was also dropping there, but to continue, administration offered raised tuition fees for the students; that way, as they argued, they could cover the salaries of their lecturers. She and her other two remaining classmates accepted.

For now, Vanessa works for a temporary government project and teaches as an assistant (for free) at one of the universities. But a lot of her peers and family no longer live in Choré.

At the Universidad Central del Paraguay, the owner and principal of the university — who, as mentioned above, has had positions and close ties with the government and other business organisations — takes on multiple roles. Even that of community manager. This is what Gabriela Lezcano, who studied graphic design there, tells us. When she started the course, there were more than 10 students. Now there are three, and last year they did not even allow her to sit the final exams for fourth semester, despite having paid for it. She never began fifth semester. After demanding a response, the institution offered her and her two remaining classmates to continue the course by modules. The first of those began last April, after having lost practically half a year in uncertainty. However, in two months she barely had a couple of classes. Her lecturers confessed to her that there are also other courses in suspense.

Lezcano, in despair over the months which had passed without an answer, long before the school had offered her the supposed modular solution, rated the Universidad Central del Paraguay on Facebook a 1 out of 5 and wrote this short, but cutting review:

I don't recommend to anyone. The courses are cancelled for the sake of it and they want to wash their hands of it. I wouldn't even recommend it to my worst enemy.

Surprised, she received a response from the profile of the university in the middle of the night. “You have certainly run out of options now”, they said to her, among other things. After insisting, Lezcano managed to speak with the engineer, owner, president and community manager in his office. She complained to him about the manner in which they wrote to her on the university profile. The president told her that the university is his and because it is his he could do what he wanted. That he could put whatever he wanted on its Facebook page. That he was disgusted by her comments and that he considered the university as his baby. And that was why he exploded and wrote what he wrote at such an hour, as he manages the institutional profile from his mobile phone.

Gabriela resigned herself to the fact that the school wasn’t going to help her. Today she assumes that she has lost years of study, money and effort. Up until that moment, she was planning to graduate the following year. But now, she says, it's time to start from scratch at another university.

Read the rest of the series: