After a Wild Campaign, Macedonia Holds Important Elections This Sunday 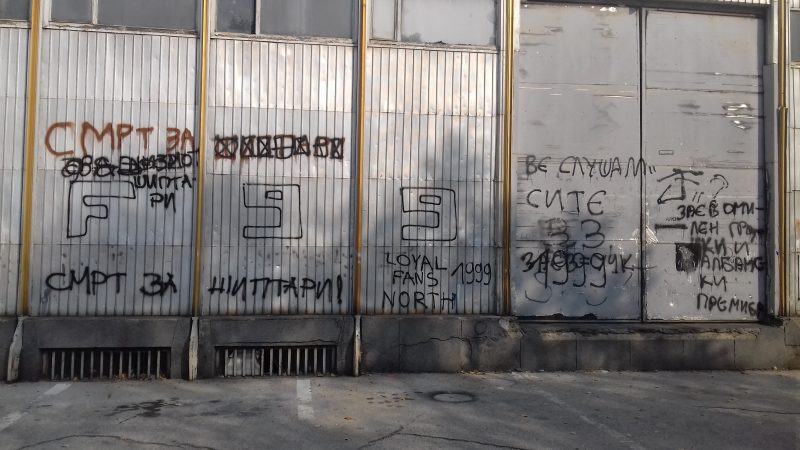 Graffiti in Skopje painted during the election campaign. It reads, “Death to Albanians” and “Zaev is the favorite Greek and Albanian choice for Prime Minister.” The messages appeared outside a public institution monitored by several security cameras. The perpetrators have not been punished or even pursued. Photo by Global Voices.

Both the government and the opposition have described these elections as a kind of referendum. The populist ruling party VMRO-DPMNE (part of the right-wing, transnational European People's Party) says winning the vote would “exculpate” its leadership from allegations that it's allowed organized crime to capture much of the government, supposedly ceding control over major state institutions to criminal groups (as noted in a recent report by the European Union which explicitly notes ‘state capture’).

Macedonia's opposition, especially center-left Social Democrats SDSM, the largest opposition party, frame this Sunday's elections as a “do-or-die” moment, warning that the fate of the country's very democracy hangs in the balance.

Peter Vanhoute, the former EU mediator who helped forge the political agreement leading to the elections, published a blog post on Medium with a message to Macedonians:

Elections however are not the final point, but only the beginning of much needed changes. These elections can’t be a referendum for certain politicians or political parties to continue with undermining your democracy.

During my stay, I met members of your government, politicians and party representatives who blindly support serious crimes and as politicians are involved in corruption, steal your money and put it on their personal banks accounts abroad, have connections with organized crime, and don’t want to accept any responsibility for their deeds. This is the reason why they successfully control the judiciary to escape from prosecution and prison. Elections can never be a blank cheque for them to continue with such activities.

Nenad Markovikj, a political analyst from the Institute for Democracy, has called this election “nastier than ever.” Campaign rhetoric has included inflammatory remarks and hate speech, not to mention a thinly veiled death threat addressed to opposition leader Zoran Zaev by the head of Macedonia's ruling party, former Prime Minister Nikola Gruevski.

VMRO-DPMNE has made xenophobia a major facet of its campaign, calling opponents “traitors” and “foreign mercenaries.” Party functionaries have depicted Zaev as someone trying to dismember the country, and Gruevski's hints about assassination were only the pinnacle of a larger effort to mobilize the party's base, ethnic Macedonians and Roma who largely work for the state bureaucracy or rely on the government for social security. Gruevski's campaign rhetoric also encouraged conspiracy theories that Macedonia's more multi-ethnic political opposition has irredentist plans to cede western parts of the country to Albania.

Hate speech aimed at ethnic or religious groups is illegal in Macedonia, but observers say politicians have circumvented the ban by speaking in “coded” messages, telling voters things like “we must stop bilingualism” — a clear allusion to the official use of the Albanian language, spoken by second-largest ethnic community. Supporters then amplify and exaggerate those messages in graffiti and posts on social media, spraypainting felony-class statements like “Death to Albanians!” and warnings that “the government will force all Christian men to be circumcised, like they do in the United States, if the opposition wins, in order to create a more docile population that's susceptible to Islamization.”

Unknown vandals attacked the Museum of the Albanian Alphabet in Bitola four times in the weeks prior to Albanian Alphabet Day on November 22, leading the Platform Against Hate Speech to come to the museum's defense. 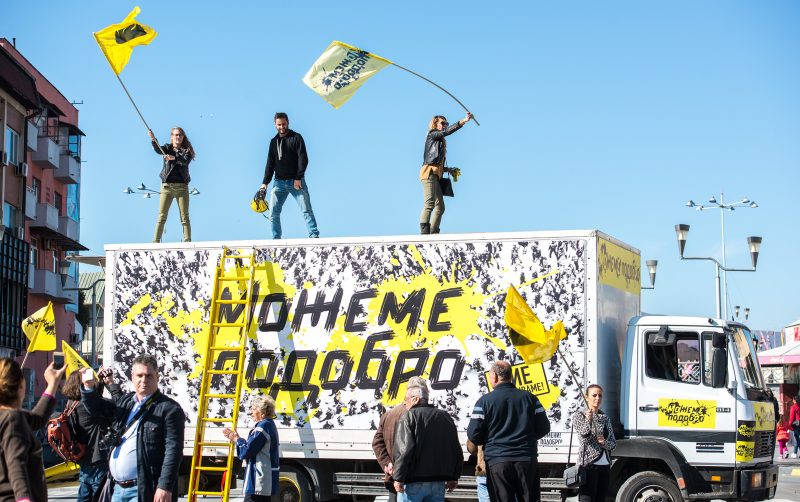 Part of the performance of the action “We Decide! We Can Do Better!” in Strumica. Photo by Vančo Džambaski, CC BY-NC-SA.

Some civil society organizations are trying to push back against Macedonia's rising tensions. For example, groups have coordinated election-monitoring and voter-outreach campaigns. Ballot secrecy remains a major issue, as well, given the pressure on voters and the government's penchant for conducting illegal surveillance.

According to a survey in April 2016 ordered by the International Republican Institute, 61 percent of the country's eligible voters said they believe their vote is a secret, 28 percent say it isn't, and 11 percent say they don't know.

Non-governmental organizations have combined election efforts to wage campaigns like the “We Decide!” movement, but this activity has provoked some unwanted attention from government tax officials, who conducted surprise inspections of a dozen different groups in the last week, demanding various kinds of financial information.

Some individuals have even left their nonprofit organizations to engage directly in politics, running for office and campaigning in the streets. Many of the most visible participants in the so-called “Colorful Revolution” match this description, running on the party lists of the SDSM and the newly formed Levica (The Left) party. Some of these people, like Pavle Bogoevski and Mareglen Demiri, are trying to enter Macedonia's government after long histories of judicial harassment and endlessly postponed criminal hearings.

Bogoevski, a human rights activist, says he joined the SDSM coalition's list to promote the values of the “Colorful Revolution.” In a series of videos published online, he explained his decision to leave the civil sector for a career in politics — a relatively uncommon switch in Macedonia.

My life stopped on February 9, 2015, when the first “bomb” [leaked wiretap] was published. As a criminologist, I knew exactly what this means to a state with even a semblance of a legal system. “It's over,” I thought. “They are caught red-handed, and there's nowhere to hide.” Oh, how we underestimated them [the ruling party].

Since then, I haven't posted a song on Facebook, or written a status update that isn't connected to the crime or the political crisis that engulfs us. I had opportunities to experience firsthand the meaning of the notion that there will be no peace, if there's no justice. I am the first criminologist who graduated at the Police Academy at the Faculty for Security in Skopje. I studied with all my heart because I wanted to serve our state. But soon after graduation I realized that our state and its police serve only the narrow political party, financial, and criminal interests of the small gang that runs the ruling parties. And when, on April 12, Gjorge Ivanov used his signature to release from responsibility 56 persons suspected for 216 crimes, denying us any opportunity for institutional justice, I realized that we have to take matters into our own hands. I also realized that I shall not stop, regardless the cost, until I see those responsible in front of an independent and impartial court.

Why I do what I do? Because I choose to serve our state. Because I choose to take responsibility for what happens in our society. And because I chose, when tomorrow, my child asks me, “Dad, what have you done for Macedonia?” to respond with pride, instead of shrugging my shoulders and saying, “Son, there was nothing I could do…”

Throughout Macedonia's campaign season, the country's largest political parties have organized mass rallies to signal that they enjoy the support of most voters. Critics say these crowds were bused in from various towns, however, and the opposition claims to have held the single largest demonstration of the race in Skopje, where people embraced slogans associated with the “Colorful Revolution,” like “No Justice, No Peace!”

Macedonia's election this Sunday remains too close to call, and the high stakes make this contest all the more captivating. The political situation is tense, and anything seems to be possible.

The latest opinion polls by institutes founded by the ruling party gave VPRO-DPMNE a lead of up to 12 percentage points over its main rival, the center-left Social Democrats. These figures were quoted without attribution by Reuters report, written by a correspondent who is also an editor of a pro-government TV station. A news item by his station named as sources two elusive think tanks which only appear in press releases, and don't even have websites. Journalists who visited their official addreses found a closed apartment and a modest private house whose inhabitants refused to talk to them.

Another telephone poll, by the credible Macedonian Center for International Cooperation also shows advantage for the incumbent, but only of 4 percentage points. Moreover, 16% of its respondents refused to answer who they would vote for.

Readers interested in following live election coverage on Sunday, in English, can tune in to Citizen Association MOST, CIVIL, and OSCE ODIHR.