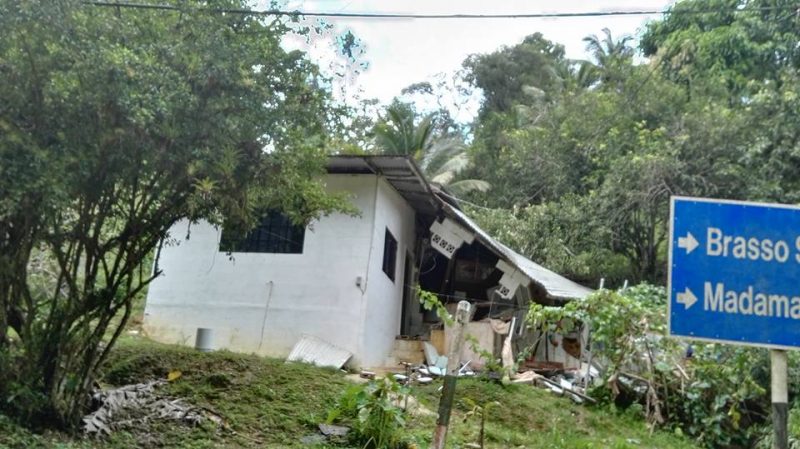 A damaged house in the Brasso Seco area in northeastern Trinidad. Photo by Kelly Warren-Fitzjames, used with permission.

A tropical disturbance, caused by a trough of low pressure, provoked severe weather conditions in several Central-Eastern Caribbean islands recently. Thundershowers and torrential rainfall began on November 28, 2016 and continued well into the end of the month. Barbados, Dominica, Grenada, and St. Lucia reported some flooding and minor damage, but according to citizen media reports, the most severe instances of flooding and landslides took place in Trinidad Tobago and St. Vincent and the Grenadines, devastating several villages.

St. Vincent and the Grenadines

At the start of the inclement weather, a flood warning was issued for St. Vincent and the Grenadines, with forecasts predicting up to six inches of rain within 24 hours. Meanwhile, the Ministry of Education closed all schools, many until December 2, 2016. The National Emergency Organisation (NEMO) further advised that only the most “essential” employees should report to work.

By the morning of Tuesday November 29, floods and landslides had been reported in various areas of St. Vincent and residents were being asked to be pro-active about evacuating their homes. The brunt of the impact was felt in the northern reaches of the island, around the communities of North Windward and Sandy Bay. “The damage is devastating”, Vincentian Senator Camillo Michael Gonsalves lamented on Facebook following his visit to North Windward. “Many of the people at the shelter in the Sandy Bay school have lost EVERYTHING. Not just all their personal possessions and furniture, but their actual house.”

Photos and videos posted on social media show the extensive destruction of homes, bridges, and roads in the area.

St. Vincent resident Sanjay Jiandani shared especially unsettling photos of the flooded London Cemetery in Sandy Bay, where coffins and skeletal bones lay exposed. He later expressed his sadness and exasperation with the current situation in a follow-up post, but put a religious spin on the situation:

Three major weather events in a matter of weeks. […] I hope priority is given to fixing the damaged infrastructure ASAP and also to assess and address potential problem areas island wide. This is not going to stop. No matter what people wish to say (deny or not), this is all Gods will and it is time for us all to take a serious look in the mirror and ask ourselves if we are living according to his word. God bless SVG and the other islands by extension.

It is not uncommon, Caribbean-wide, for people to attribute natural disasters to some kind of religious comeuppance, as the majority of islands have thriving Christian communities, especially in rural areas.

Jiandani’s call for a focus on infrastructure reconstruction is not unfounded.
In a Facebook post, Senator Gonsalves reaffirmed that “the infrastructural damage is widespread”, saying, “[An] engineer told me that it's easily tens of millions of damage in London/Sandy Bay alone.”

A NEMO “situation report” released on November 30 noted over a dozen damaged roads and bridges in addition to widespread loss of electrical power. The Central Water and Sewerage Authority (CWS) reported seven major interruptions in its main transmission line near Sandy Bay, which affected water supply in many areas.

Beginning the arduous process of recovery, Prime Minister Ralph Gonsalves and other government officials met with Windward-side families and assessed the affected areas. NEMO’s damage assessment teams joined these efforts at the beginning of December, while at the same time working to provide food and supplies for shelters, and the nearby Orange Hill Mental Health Centre.

The storm hit the island of Trinidad on November 29, 2016, triggering serious flooding, and causing large sea swells and landslides that isolated the North Coast fishing villages from the rest of the country. 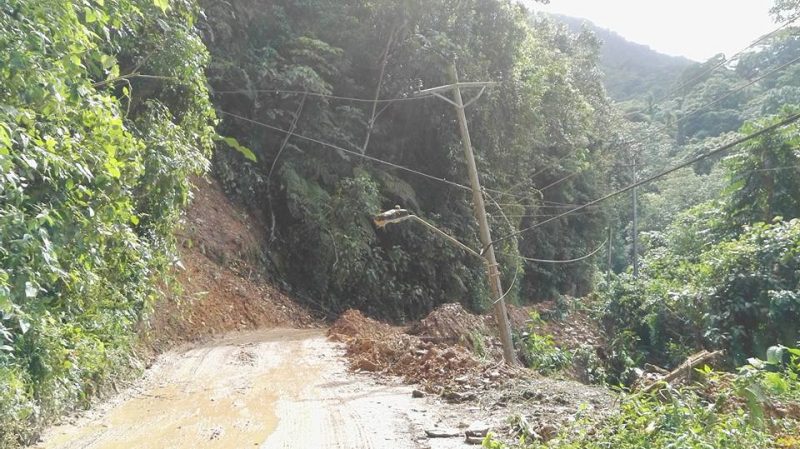 A landslip on the main road heading out to the town of Arima in Trinidad. Photo by Kelly Warren-Fitzjames, used with permission.

One resident, A Pencos Reyes, shed light on the gravity and urgency of the situation in a Facebook post:

Up to 3,000 villagers in these vulnerable rural areas [Toco, Grande Riviere, and Matelot] are in desperate need of food, water, mattresses and in some cases shelter as heavy winds blew the roofs of an undetermined number of houses. Up to late last night, many were without power, as electricity poles were pounded down by the wind and rain. Water lines were also broken, according to reports, and damage to the infrastructure has been described as extensive.

Head of the Office of Disaster Preparedness Management (ODPM) Dr. Stephen Ramroop called the devastation in Matelot “the worst disaster to have hit the village in the last five years”. 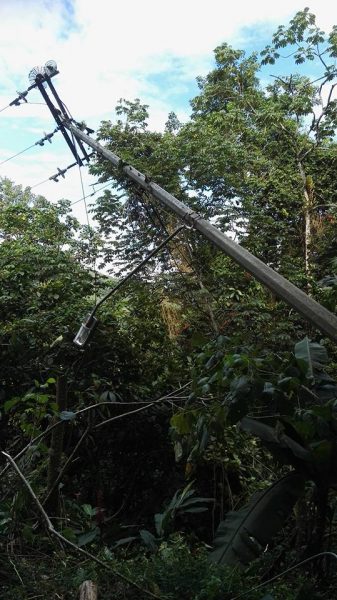 A precariously leaning light pole in the area — one result of the heavy rains, landslips and flooding. Photo by Kelly Warren-Fitzjames, used with permission.

By December 1, the ODPM released a public service announcement to residents of Matelot, ensuring imminent relief. Since that time, the roads have been cleared and a bailey bridge was constructed, fully reconnecting Matelot to the rest of Trinidad. The Trinidad and Tobago Electricity Commission (T&TEC) worked in the area to restore power to the affected communities, and the ODPM distributed mattresses, garden hoses, coolers and water to affected residents. The army and air guard also participated in recovery efforts.

Citizens responded to the situation with empathy, organizing numerous donation drop-off centers in the north-eastern area of the country.

Destruction, however, was not isolated to that area. Brasso Seco, located in the country's mountainous Northern Range, also experienced serious damage.

Facebook user and Brasso Seco resident Kelly Warren-Fitzjames chronicled her experiences through a series of posts in which she shared photos of the scene on the morning of November 30, and expressed appreciation for the “rapid response of government workers”.

However, this sentiment regarding government response was all but universal. Terry Rondon, councillor for the Toco/Matelot community on the northeastern tip of the island, expressed frustration with the relief initiatives, referring specifically to the 72 hours that it took for residents to get water. He questioned why the area had not been regarded as a disaster zone and expressed concern about a repeat of Tuesday's disaster, saying, “We have to be prepared for an event like [this]”. 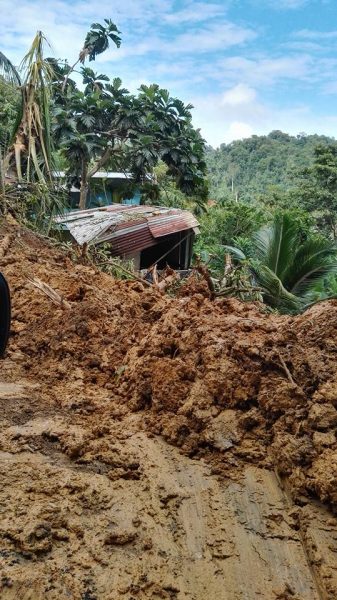 A home in danger, positioned just below a landslide on the mountain. Photo by Kelly Warren-Fitzjames, used with permission.

Rondon’s concerns were echoed by a larger critical dialogue sparked by the week’s devastations.

This should certainly be an eye opener for all of us. We're just not ready for any kind of natural disaster in Trinidad and Tobago. I mean most nations aren't but they do have certain contingencies in place that will allow them to react quickly and we don't. I hope we can learn from it though. I hope the residents get the help they need, We should thank all the members of the defense force and disaster teams that are currently working day and night to help those that have been affected by this.

Climate change was also a recurring topic of conversation. Kent Thomas, a citizen of St. Vincent, expressed similar frustrations in a Facebook post:

It is ridiculous there are people who still do not believe in climate change while my country lives on the forefront of this war and we are losing every battle. […]
It is ridiculous my country still does not fully appreciate the need for disaster research and local research support.

Both Trinidad and Tobago and St. Vincent and the Grenadines have made significant strides in recovery since the storm, but there are still many conversations to be had and much left to be done before the lives of those affected can return to normal. As reiterated by many involved, the process will take #AllHandsonDeck.