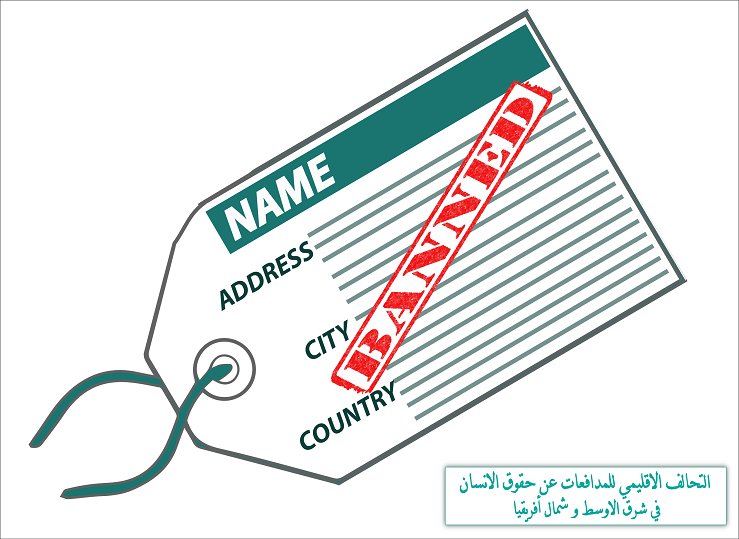 Photo shared on Twitter by the Regional Coalition for Women Human Rights Defenders in MENA. Link.

Travel bans on politicians and human rights defenders are just one of the many human rights violations that Egyptian authorities have committed in recent years with disturbing frequency, and a rash of them in November has brought the issue into tight focus.

Aida Seif El-Dawla, a renowned Egyptian activist and co-founder of Al-Nadeem Center for Rehabilitation of Victims of Violence, is one of several people who were banned from leaving the country with no prior notice. In late November, she was prevented from traveling to Tunisia as she was boarding the plane to attend a conference on the rehabilitation of torture victims in North Africa, according to independent Egyptian newspaper Mada Masr.

Authorities informed her that she was involved in an unspecified case without providing further details. On Twitter, prominent Egyptian journalist Hani Shukrallah bluntly theorized what the motivation for her travel ban was:

In a statement to Mada Masr, Seif al-Dawla herself said:

This step is in line with the crackdown on community foundations and the NGO law they [the parliament] want to ratify. They want to suppress all of us.

In September 2016, the government approved a new draft NGO law that “places Egypt’s security apparatuses at the forefront of monitoring the work of NGOs, through their membership on the coordination committee,” according to Mada Masr. The law, which will regulate foreign NGOs in Egypt and establish an apparatus to monitor sources of foreign funding, was approved at the end of November by parliament.

Negad al-Borai, a human rights lawyer and head of the legal unit at the United Group firm, told Mada Masr:

The government has been working for the last two years on restructuring the legislative system to violate the constitution. Even in the time of Mubarak we didn’t see this.

A spike in travel bans since President Morsi's ouster

The travel bans are a part of the government's broader efforts to tighten its grip on civil society and social movements.

In February, independent information platform Daftar Ahwal examined the 554 known cases of departure and entry ban and arrests in Egyptian airports between February 11, 2011 and February 20, 2016 that were tied to the subject's activism in the realm of politics, human rights, journalism, arts and culture, or social movements. According to their analysis, the number of human rights defenders prevented from leaving the Egyptian territories had drastically increased since the events of June 30 and July 3, 2013 that saw the removal of President Mohamed Morsi from power.

The report also broke down the number of travel bans issued by the successive rulers of Egypt since the 2011 Egyptian revolution that ousted longtime President Hosni Mubarak. The data shows Adly Mansour, the chief justice of the Supreme Constitutional Court of Egypt and acting president between July 2013 and June 2014, and the current President Abdel Fatah Al Sisi, who took over in June 2014, as the leading offenders by a wide margin, with 279 and 218 cases respectively.

They were followed by the Supreme Council of the Armed Forces (SCAF), which ruled between February 2011 and June 2012, and President Morsi, who ruled between June 2012 and July 2013, with 36 and 21 respectively. 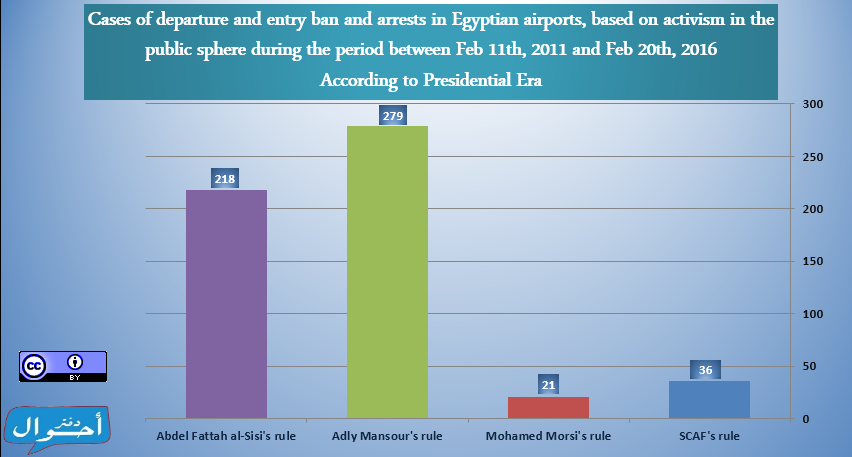 Infographic from Daftar Ahwal, republished under a Creative Commons license.

November 2016 saw several more human rights activists subject to travel bans without prior notice. Ahmed Raghed, a lawyer and founder of the National Community for Human Rights and Law, was informed at the airport that he was not permitted to travel to Morocco for the Conference of the Parties (COP 22) of the United Nations Climate Change Conference, according to Front Line Defenders.

And Azza Soliman, founder and head of the board of trustees of the Center for Egyptian Women Legal Assistance (CEWLA), was prevented from traveling to Jordan on November 19 for a training on women's rights in Islam. Her assets and those of her law firm were also frozen.

Nadeem AbdelGawad, Soliman's son and a student at the School of Oriental and African Studies at the University of London, wrote on Facebook on November 19:

Today, Egyptian authorities have banned lawyer and women's rights’ defender Azza Soliman, who I am proud to call my mother, from traveling. It appears that my mother's name is the latest update to a continousely growing list of travel bans against human rights’ defenders. She was informed at the airport that she is banned from traveling because she has a case against her although there have been no official charges or pending cases, leaving her in a status of legal uncertainty. People like my mother have already been through a lot and they have managed to survive. This too shall pass.

On December 7, 2016, AbdelGawad announced on Facebook that Soliman was arrested, saying that

Police came to our house with an arrest warrant for my mother Azza Soliman. We are on our way to Masr Elgedida police station.

CIVICUS, a global network of civil society organisations and activists, expressed support for Soliman on their Twitter account:

@AzzaSoliman1 faces a travel ban and an asset freeze from Egypt's government over her work to improve women's rights. Justice for Azza! pic.twitter.com/MoNzZxgaaQ

Mozn Hassan, the founder and executive director of the Egyptian women's group Nazra for Feminist Studies, wrote about Soliman's plight for independent global news site Open Democracy. She said although neither Soliman nor any CEWLA member were officially charged or summoned for investigation, “it is assumed that these measures are directly related to the case nb. 173 for the year 2011 at the Cairo High Appeal Investigations” in which several human rights defenders and heads of civil society organisations are being investigated over foreign funding.

Hassan herself had become a target in June when she was prevented from attending the Executive Committee meeting for the Women Human Rights Defenders (WHRD) Regional Coalition for the Middle East and North Africa that took place in Beirut.

In response to the new NGO law, 22 NGOs and six political parties released a statement on November 24 condemning the bill “because it effectively eradicates civil society and defers administration of it to the government and security apparatus.” An excerpt reads:

The state has already taken real steps to eliminate Egyptian civil society organizations by prosecuting case no. 173/2011 on foreign funding, and several organizations and their current and former directors have been banned from travel and have had their assets frozen. This new law, however, would pave the way for the eradication of any sort of civic action geared to development, charitable activities, and services. The operation of local development associations throughout Egyptian villages and hamlets, which provide services to local residents, will become nearly impossible.

The hashtag #LetThemTravel trended in recent days in efforts to draw international attention to the issue. Human Rights Watch and Amnesty International joined forces, creating a video asking, “Why is the government of Egypt threatened by these people?”