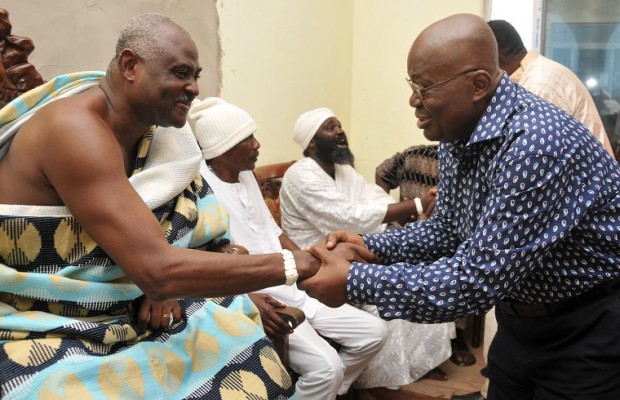 Ghana goes to the polls [2] for presidential and parliamentary elections on December 7. There are seven presidential candidates; however, the main contest is between incumbent President John Dramani Mahama of the National Democratic Congress (NDC) and opposition candidate Nana Akufo-Ado of the New Patriotic Party (NPP).

As the day approaches, we have looked at some of the more compelling comments shared on Twitter using the hashtag #GhanaDecides [3].

We can do all the talking but you know what speaks loudest. #OVOV [4] #GhanaDecides [3] pic.twitter.com/Nvj7TuSAea [5]

Kasim shared this image showing the difference in living standards between politicians and voters in Ghana:

In times of fake news stories flying all over social media. The credibility of Media Houses in #Ghana [13] will be top on demand.#GhanaDecides [3]

Some Twitter users analysed the context and offered their opinions of who will take the hotly contested presidential seat.

Nic Cheeseman, an associate professor in African Politics at Oxford University and the founder of Democracy in Africa [15], summed up the situation:

In Ghana, where the NDC government is struggling to retain power amidst economic troubles. An opposition win coming on Wed? #ghanadecides [16]

While Firoz Lalji Centre for Africa at London School of Economics noted an interesting phenomenon in Ghanaian electoral politics:

On the issue of who will win, blogger Nana Ashanti thought the ruling party, which she does not support, will carry the day. She explained [21]:

At a risk of being lynched and/or insulted, I will say that in my opinion the current NDC will retain power come Dec. 7th. Hear me out:

All my predictions have been wrong this year but if I know Ghanaians well, I can say we rarely mean what we say. I am not a fan of the current NDC government. At all. And I have been critical of them for as long as I can remember. With that said, they do appeal to the silent majority. The so called forgotten, who live in the Upper regions of Ghana. They have been loyal to the ruling party through thick and thin. These folks are the “Louisiana Purchase”. The flyover regions, literally and figuratively.

They are very content people and love their lives the way it is. They do not worry their heads about inflation, the high unemployment rate, corruption, exchange rate, infrastructure or economic development. The real hand-to-mouth people. Time and time again, this silent majority has proven to be the ones to break the tie or decide who the next government is going to be.

HOW WILL THEY SWING THIS YEAR?

These are the folks who wake up early to join long and winding queues to vote for the NDC , whether their palms have been greased or not. They do not spend copious amount of data chanting party slogans on social media.

Edudzi Nyomi took time to blog about the problem of fake news on social media. He gave the following example [22]:

It’s election season in Ghana too and the made up stories continually flood our digital timelines and news feeds. Just yesterday I saw a story on an NDC man who was arrested with heavy ammunition in the Ashanti Region in November 2016. The article said the police officers were tipped off by “NPP Agents”. Hearing this story around this time of the year would make you tensed up, but here’s the problem;

The picture of the guns in the story above – which were no ordinary guns – was the exact picture I had on my phone back in December 2015. A gang of robbers in Kumasi were arrested last year with those weapons. I googled the story and found other news outlets reporting the same story with the same picture. What was the 2015 picture doing as a cover picture for some other story almost a year after, then? The whole story seemed murky and placed emphasis on the NPP “defending their land and their king”.

Finally, Chief Austin Arinze Obiefuna, the executive director of Afro Global Alliance Ghana, hoped for free and fair elections as it has always been a tradition in Ghana:

Dec 7 #GhanaDecides [3] continue your already earned beacon of hope for Africa & have a free & fair election to reflect the wish of the people.