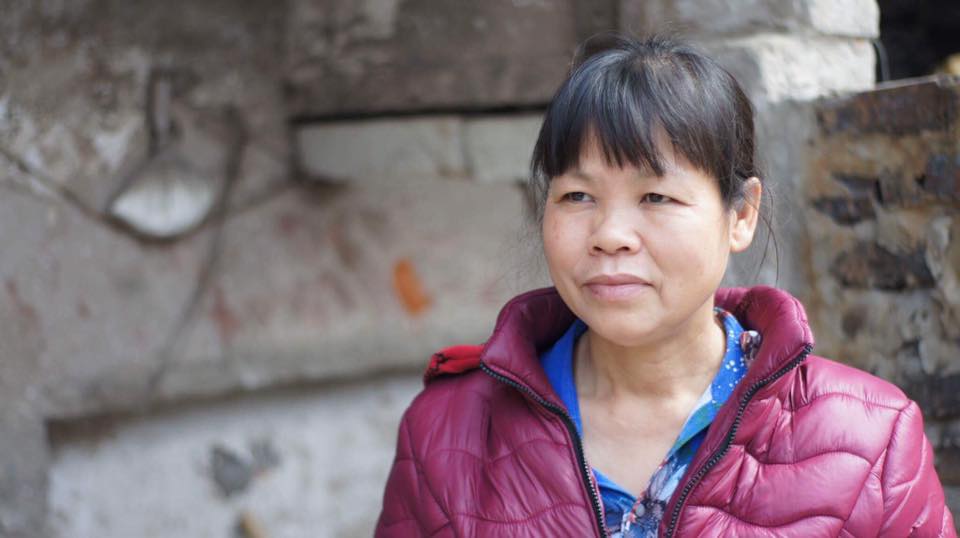 This article by Đôn Lê is from Loa, an independent news website and podcast that broadcasts stories about Vietnam, and is republished by Global Voices as part of a content-sharing agreement.

A prominent Vietnamese land rights activist, 54-year-old Cấn Thị Thêu, has had her sentence upheld in her appeal trial on November 30, 2016.

The Hanoi People’s Court declined to reduce her 20-month jail term, while scores of her supporters who were barred from attending the “public” trial protested outside the courthouse.

Thêu was arrested and charged with “causing public disorder” in June and sentenced to prison in September for participating in public demonstrations following one of Vietnam’s largest environmental disasters.

Thêu’s lawyers, Hà Huy Sơn, in a post on his Facebook, called the verdict “legally, ethically baseless and unjust.”

Another lawyer, attorney Võ An Dôn, said she was punished for her criticism of the government and for her vocal support for detained human rights lawyer Nguyễn Văn Đài. 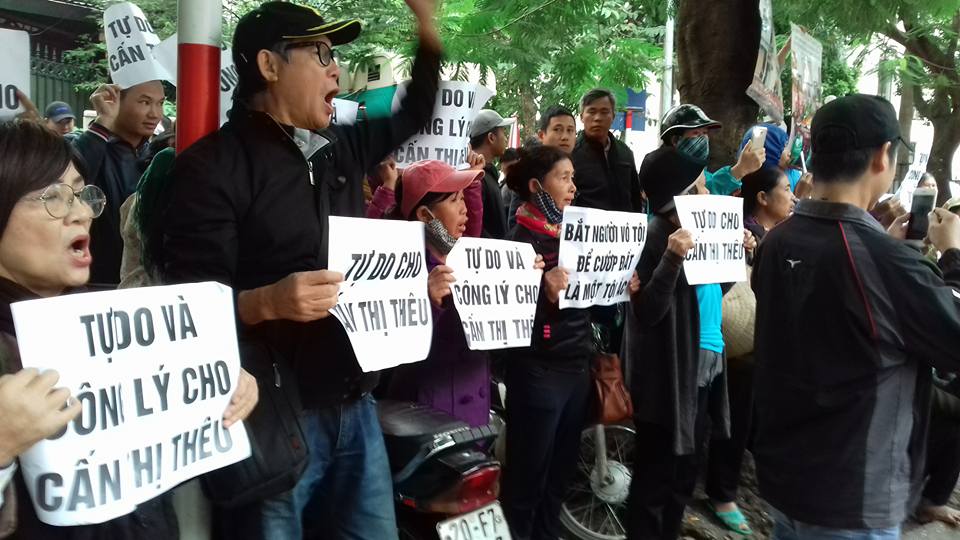 Local police attempted to prevent Thêu's two sons, Trịnh Bá Phương and Trịnh Bá Tư, from leaving their home to attend their mother's trial. Phương used Facebook Live to broadcast the scene of police stopping taxi drivers from taking them to the courthouse.

The brothers eventually arrived the courthouse, but they never made it inside. Phương and Tư joined about 50 supporters outside leading chants calling for Thêu’s release and against government land grabs before they were taken by police.

Videos on social media showed police surrounding demonstrators and pushing them onto police buses which took them to local police headquarters. 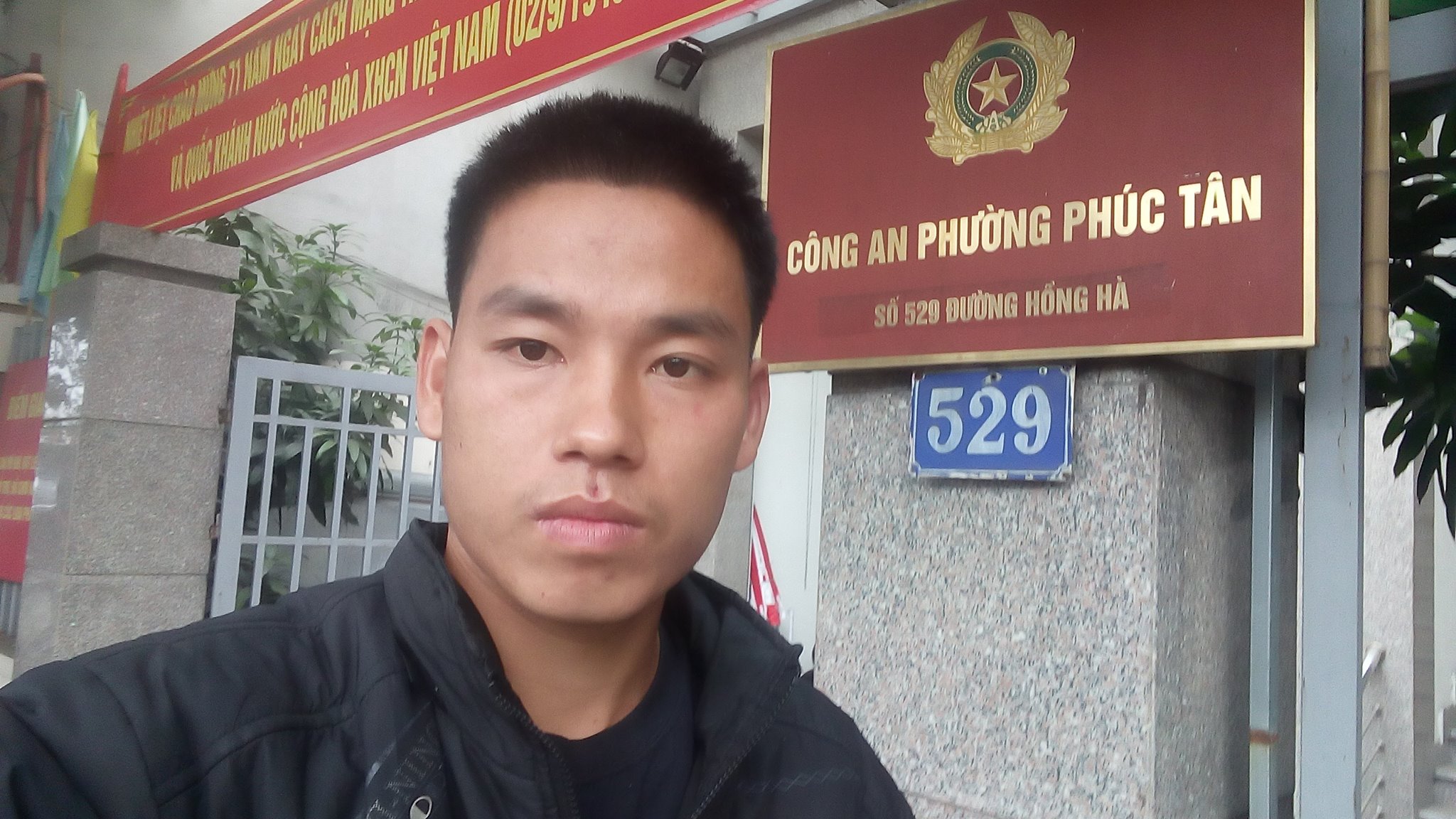 Trịnh Bá Tư in a selfie posted on Facebook after his release, outside of police quarters in Phúc Tân Ward. Image: Facebook/Trịnh Bá Tư

In a Facebook post on Wednesday evening, Tư says he was “handcuffed and illegally detained for seven hours”:

When I was hauled away this morning, three of the Hà Nội policemen beat me.

This is Thêu’s second imprisonment. The farmer from Dương Nội, a village west of Hanoi, became a fearless protester against land grabs after her family's land was taken by authorities in 2007. She was previously arrested alongside her husband in April 2014 for filming and documenting large government land seizures. She continued her activism undeterred after she was released from that sentence in July 2015, and has been a leading figure among land rights petitioners and civil rights advocates. 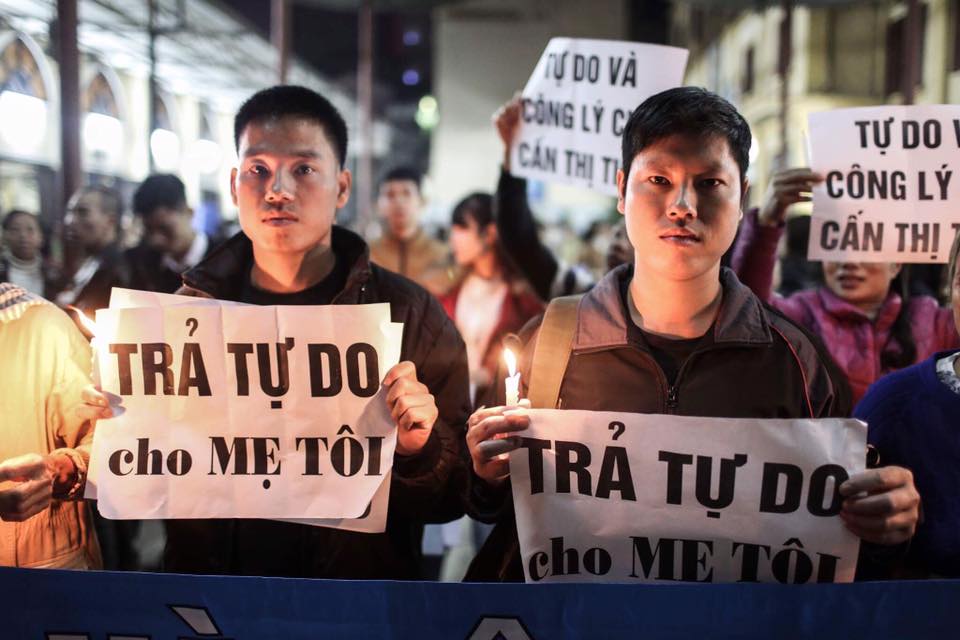 Her case has garnered international attention, with political leaders and rights groups calling for her immediate release.

“The only real justice that the Appeal Court could have provided for Cấn Thị Thêu was to dismiss these bogus charges and immediately release her,” said Phil Robertson, a spokesman for Human Rights Watch:

The Vietnamese government should urgently amend the land law and its grievance processes to protect farmers’ rights, not to punish them for voicing their opinions and demanding action on their claims.