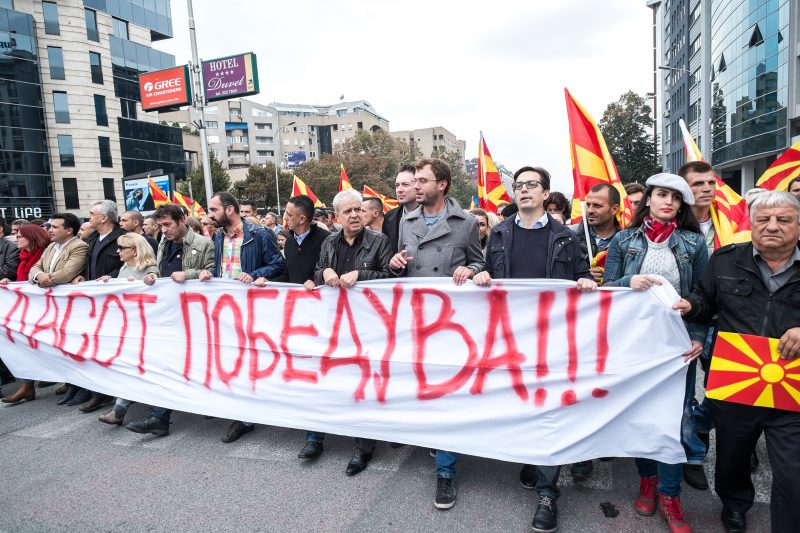 “The Vote Wins!” a banner from an anti-fascist opposition rally in Skopje, Macedonia on October 11, 2016. Photo by Vančo Džambaski, CC BY-NC-SA.

The early parliamentary elections in Macedonia are scheduled for December 11, 2016. The official campaigns, underway since November 21, have already provided a rich crop of controversial developments, not to mention the whiff of a wind of change.

Political parties participating in the elections were obliged to submit lists of candidates to the State Election Comission (SEC) by before the start of the campaign. The main contenders are coalitions led by the incumbent right-wing VMRO-DPMNE, and the center-left SDSM (Social Democratic Union of Macedonia). A total of 11 political parties and coalitions are participating in the race, across six electoral districts (ED).

Unlike all other elections in recent memory, the SEC instituted a change that was unimaginable during previous rounds. For the first time, it rejected the candidacy of a party called the Social Democratic Party of Macedonia (SDPM), which in name and branding had been mimicking the main opposition party. The SDPM appears in public only during elections; otherwise it lies dormant without any activities. The party also submitted lists of candidates with names which are suspiciously similar to the names of leading opposition candidates, which immediately attracted public attention:

The surogate candidates avoided talking to journalists, who nevertheless found out that they are all affiliated with the ruling VMRO-DPMNE. SDPM party head Branko Janevski, a state administration official, had a history of similar activities:

[VMRO-]DPMNE claims it has SIGNIFICANTLY higher rating than SDSM – but AGAIN they use petty tricks against SDSM.

Some Twitter users used the hashtag #СДПМ — derived from the Cyrillic acronym of the “double” party — to discuss the ramifications. One of them refered to copyright infringement of products by Adidas and SONY, while parodying the ruling party's claims that they attract foreign investors:

Jokes nonwithstanding, nobody considered this affair a laughing matter. In 2008 the opposition SDSM tried to sue Janevski, because the misleading names of their “doubles” on the ballots garnered enough votes to cost them three seats in the parliament. The courts rejected the suit, enabling full impunity for this form of electoral fraud.

This time, the SEC refused to accept them — not because of identity theft, but due to technicalities — such as improperly filled forms and mismatching signatures.

This attempt to confuse voters is not a unique Macedonian specialty. The British Broadcasting Corporation (BBC) reported that during a recent local election in Romania, three candidates with the same name ran for the post of mayor of the town of Draguseni. In the United Kingdom (UK) in 1994, the Liberal Democrats lost 10,000 votes to the Literal Democrats. 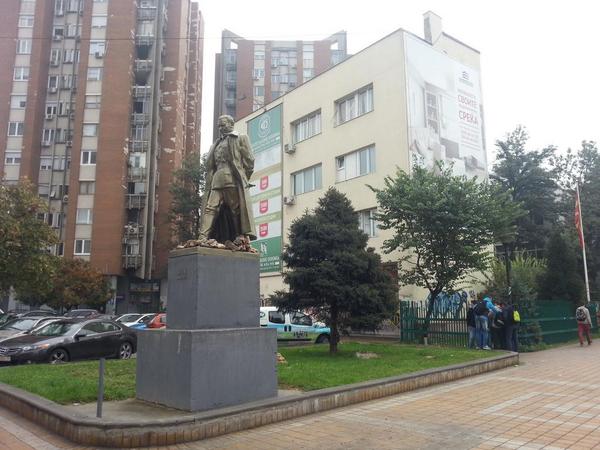 In 2013, the ruling coalition dominated by anti-communist VMRO-DMNE, erected a new monument to Communist leader Tito in the center of Skopje. This secured them one Titoist vote within the Skopje City Council. Photo by GV, CC BY.

Back in Macedonia, another hot topic at the start of the election campaign was the controversial choices made by the ruling party, VMRO-DPMNE, which is a member of the right-wing European People's Party. For instance, the declared anti-communist party continued its allince with the staunch communist Union of Tito's Left Forces, which still professes loyalty to the long-gone Yugoslav president Josip Broz Tito.

The party, which at government level always forms a coalition with the largest ethnic Albanian party in the country, also put up Johan Tarčulovski, who was convicted for war crimes against ethnic Albanian civilians during the 2001 conflict.

The international war crimes tribunal in the Hague sentenced Tarčulovski to 12 years in prison. After serving his sentence, the regime of Nikola Gruevski welcomed him back to Macedonia as a hero. Through their control of the state, they provided him with various forms of income, including a job within the state administration for his folk-singer wife. Placing him on the ballot was interpreted as a signal that the party's campaign will include arousing the ethnic and religious tensions among both Macedonians and Albanians.

According to Article 407-a of the Macedonian Criminal Code, “negation, minimizing, approval or justification” of war crimes or genocide is punishable by prison sentences from one to five years. This article has not been enforced so far, providing impunity for perpetrators.