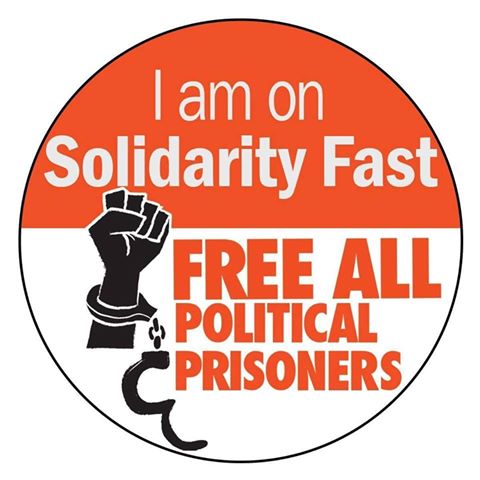 In support of the campaign calling for the release of political prisoners in the Philippines, activists launched a solidarity fast — a protest that was staged in conjunction with the political prisoners themselves, and with their relatives. The fast began on December 3, 2016 and will last until Human Rights Day, on December 10.

As of October 31, 2016, there are 401 political prisoners in the country, many of them rural-based activists who are accused of being rebels. According to their lawyers, the prisoners were detained on trumped-up charges such as murder, arson and kidnapping. Their supporters insist, however, that they are ordinary activists who fought for land reform, human rights and good governance. 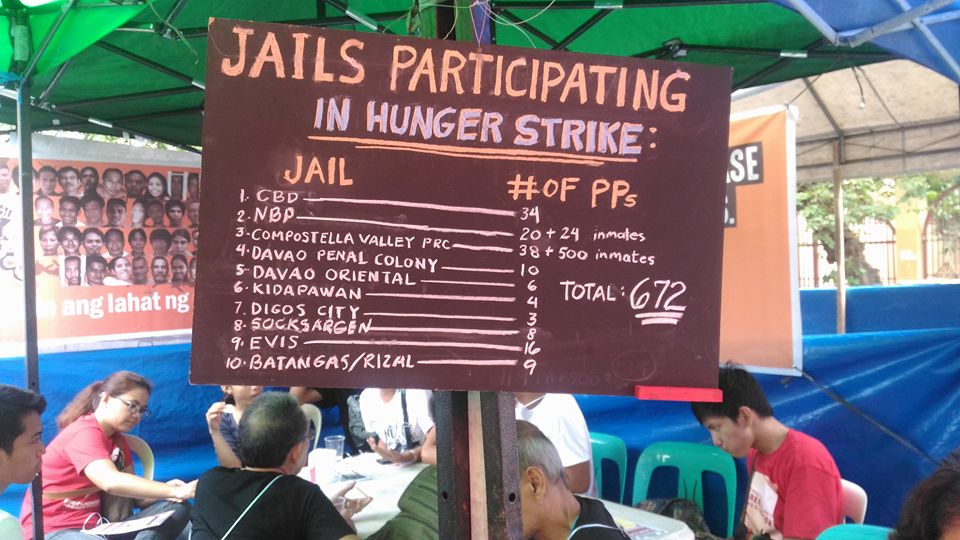 About 400 political prisoners and their supporters across the country are currently holding solidarity fast. Source: Facebook 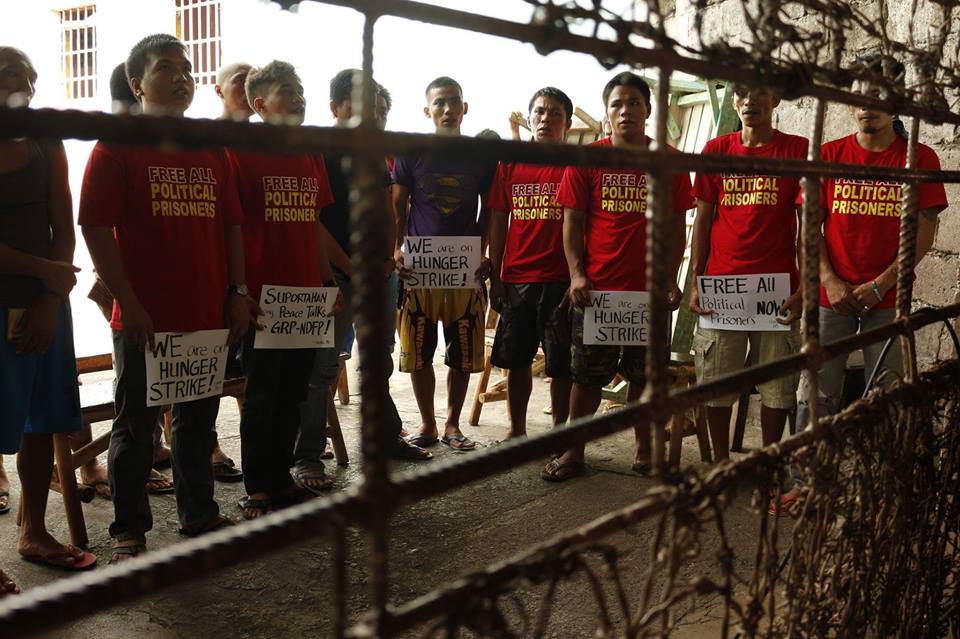 Their relatives issued this statement to call for their immediate release:

Political prisoners are victims of the government’s injustice. They are persons caring for the marginalized sectors of the society but they were jailed for trumped up charges. They are not criminals. Our loved ones have already lost too many years, suffering in prison. Some of them have already died while in detention. 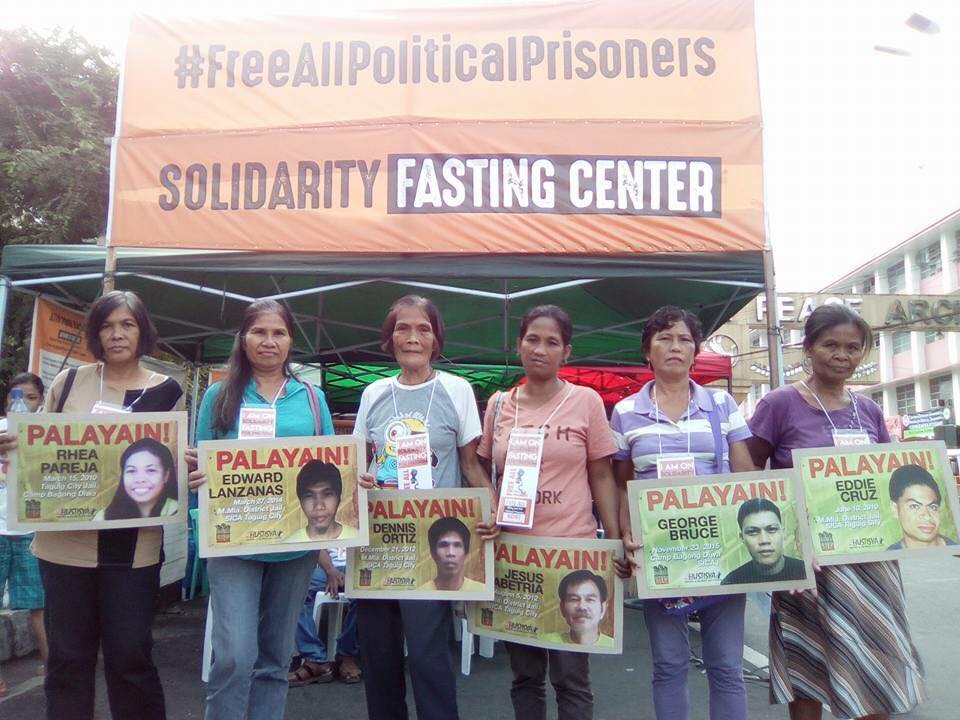 Some relatives of political prisoners are joining the solidarity fast. The word ‘palayain’ which can be seen in the placards, means freedom in Tagalog. Source: Facebook

The issue is linked to the armed communist rebellion — a conflict among the government, the Communist Party of the Philippines (CPP), the New People's Army (NPA) and the National Democratic Front (NDF) — a situation that has been in existence since 1969. The government claims the prisoners were rebels who must answer for their crimes, while the prisoners refuse to be tagged as criminals.

When a new government was elected into power six months ago, one of the items on its agenda was to resume peace talks with the rebels. It also acknowledged the release of political prisoners as a positive step towards promoting reconciliation, healing and justice in the country.

Although the government has already worked for the release of more than a dozen peace negotiators, activists are also demanding the freedom of more than 401 political prisoners, especially those who are already old and suffering from serious ailments.

The government has agreed to the demand in principle, but activists are worried about the slow process and the inconsistent pronouncements of some government officials. For example, it was suggested in the past that a faster resolution to the issue could be achieved through the issuance of an amnesty proclamation, but this was subsequently given less priority due to some legal concerns. 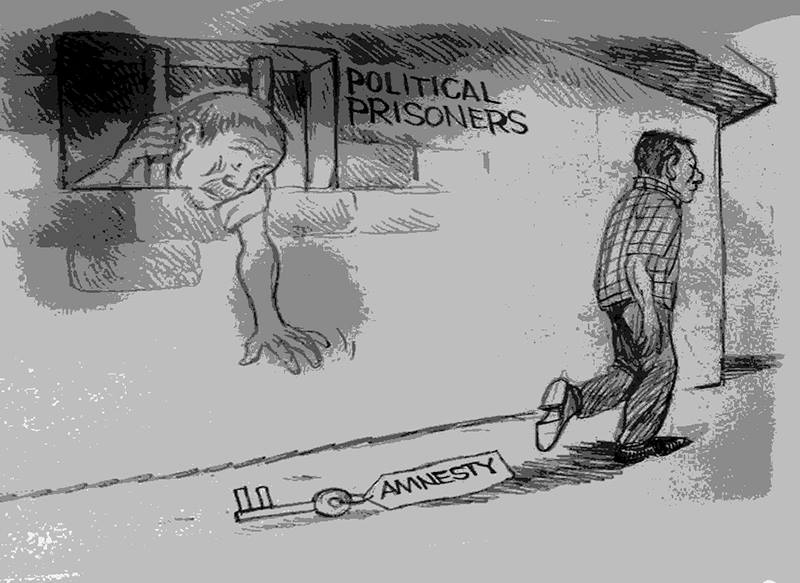 Cartoon about the situation of political prisoners by Leonilo Doloricon. Source: Facebook

To raise greater public awareness about the issue and pressure the government into releasing political prisoners before the end of the year, activists have organized various activities and protest actions in time for the Human Rights Day celebration. 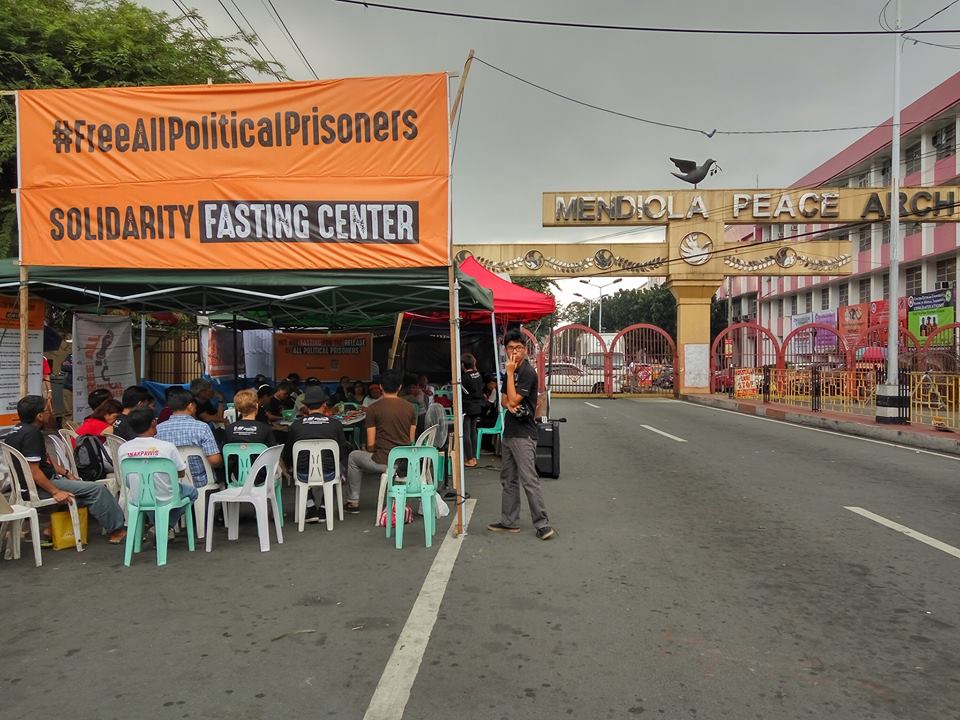 The solidarity fasting center was set up near the Mendiola gate of the presidential palace. Source: Facebook

Netizens have also been supporting the cause on Twitter:

who are the political prisoners? they are.

Young activists have also initiated a #fastingchallenge campaign on social media, encouraging the public to join the solidarity fast by posting photos of a favorite food item which they will pledge not to eat until Human Rights Day.

I blame the administration that jailed our political prisoners for my rice-less sinigang dinner! #FREEALLPOLITICALPRISONERS pic.twitter.com/lea2IpTpdM

Meanwhile, more groups are set to join the solidarity fasting in the next few days as they seek to compel the government to end the continued detention of 400 political prisoners in the country.