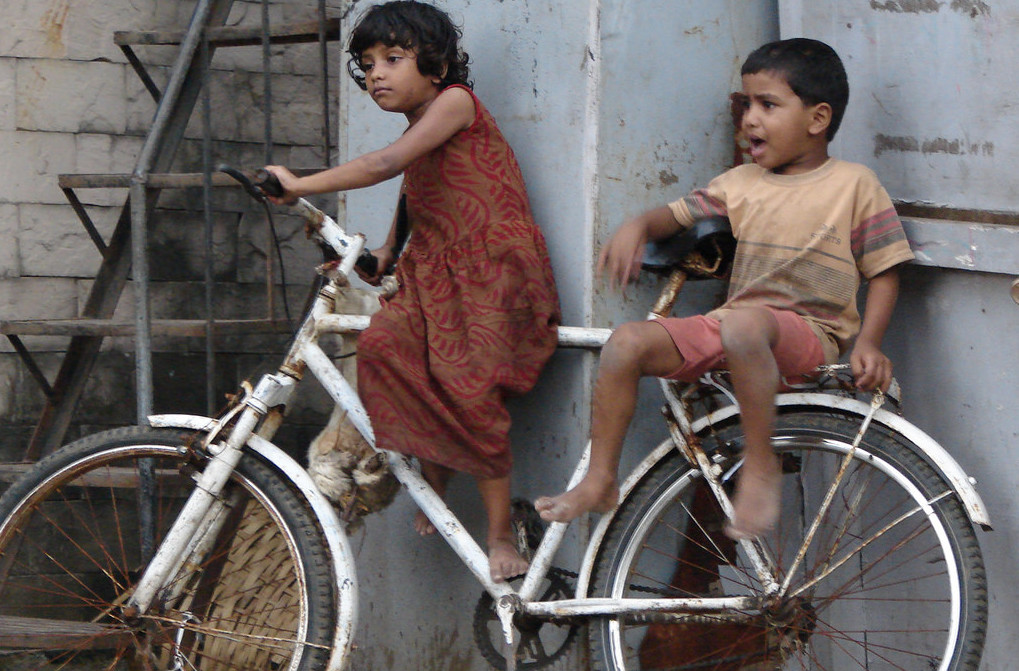 Indian Kids on the street wtih a cycle. Often traditional gender roles are imposed on them (not in this case). Image from Flickr by Harini Calamur. BY-NC-ND 2.0

This post originally appeared on Video Volunteers [2], an award-winning international community media organization based in India. An edited version is published below as part of a content-sharing agreement.

In India, discriminatory attitudes towards men and women [3] have existed for generations and continue to be an enormous problem in the society. Traditional patriarchal role models relegate women to secondary status within the household and workplace, which affects women's health, upbringing, independence and status in the family, from an early age. In a Youth Survey [4] conducted by Women Endangered [5] this year, nearly 87% participants commented that India is still a patriarchal society. Mass awareness and debates on the subject are required to eliminate bias and stereotypes and make a change.

The recently concluded #DismantlePatriarchy Campaign [6] by Video Volunteers asked people to share their stories and suggestions via email or Twitter to ‘change the game’ around patriarchy. The campaign welcomed stories of women and men in India, who shared, using the hashtag #KhelBadal, how they negotiate and challenge patriarchy in everyday life — at home, at work, at school, in cultural and public spaces. 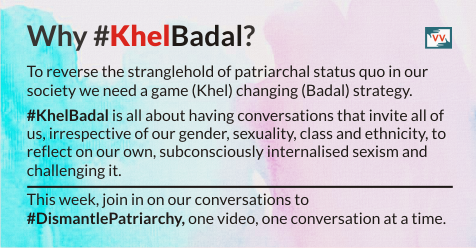 The last time women came out in such large numbers on the streets of India was to protest the Delhi bus rape of Jyoti Singh [8] in December 2012. But what about the millions of small ways in which patriarchy and gender discrimination insinuate themselves into their daily lives? Conversations on these matters only happen around violent incidents and we rarely confront the nuances of everyday, routine patriarchal norms.

Video Volunteers have trained 63 gender correspondents across 16 states — from Rajasthan to Bihar, from Odisha to Haryana — to make films that capture the nuances of routine, normalised gender discrimination and to run gender discussion clubs where lively, introspective conversations are happening.

These are a few examples of the conversations that are taking place and the change these discussion clubs are bringing on the ground: 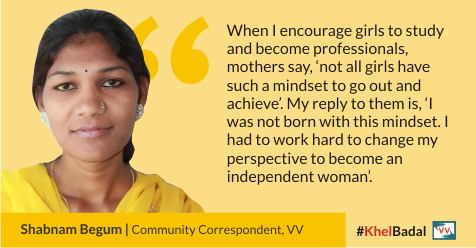 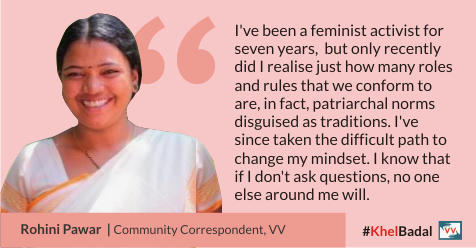 Video Volunteers generated online discussions with its staff and online followers in various ways, including a Twitter chat on November 29, 2016. This was done to help bridge the digital divide and enable urban and rural women to exchange experiences and learn from each other:

Sangeeta has shared her story of #KhelBadal [11] Now it's your turn Reply or write back at khelbadal@videovolunteers.org pic.twitter.com/oh8XVaCCzB [12]

in order to #khelbadal [14], I try to show ppl in my life how being a woman impacts everyday decisions I have to make. #seeingisbelieving [15]

I rebelled & refuse to cook for ppl because I couldn't care less for their validation of my femininity. Ironic cos I love to cook #khelbadal [14]

What is usually the role of women in Indian households?

Why are the aspirations of young girls treated so differently from those of young boys? Why are girls prepared for housework from an early age, but boys are allowed to spend their childhood playing and studying? This video from Uttar Pradesh highlights this divide clearly:

While 11-year-old Khushboo starts her day at 5 am, her 8-year-old brother leads a comparatively carefree existence. Every day she cooks, cleans and takes care of her younger siblings before going to school, and has a host of tasks in the evening which leaves her with no spare time to play. But the boy’s day is divided only into school time and play time. Khushboo’s aspirations of becoming a qualified doctor are exactly the same as that of her brother. But are we giving her even close to a fighting chance?

Unless we are able to transform our private spaces to more gender equal ones, we can never end sexism and discrimination in public arenas.

Gender role models are frowned upon

There is a general perception that certain jobs at home and work are divided according to gender. So when 16-year-old Rohit started sharing household chores with his mother and sister, people made fun of him and ridiculed him for doing ‘unmanly work’. But this plucky young boy is prepared to give answers: ‘I give appropriate responses to them so they don’t say anything anymore’. He cooks, cleans, washes clothes and helps his two younger siblings with their studies.

Rohit shows that to change our perception is simple, but to be consistent in the change is the hard thing. It’s time we follow his example and question ourselves to find how we are perpetuating and normalising patriarchal roles in our daily lives.

The field of art is as gendered as any other. While men refrain from being dancers whereas women are encouraged, musicians also have such biases, whereby certain instruments are considered more suitable for men.

Mithu Tikadar is unusual in her choice of instrument: the tabla. Traditionally seen as the domain of male practitioners, Mithu constantly encounters discrimination in her field. The worst was when her aunt told a young Mithu that she was a disgrace to all women. Undaunted, Mithu decided to take up tabla as a subject for her secondary school exams and build a career out of it.

Since then, Mithu has come a long way. Today, she’s economically self-sufficient and is the only Dalit [a member of the lowest caste] woman to have cleared the nationwide test on musical instruments, which makes her eligible to teach in colleges. But her struggle with patriarchal norms continues.

After the brutal gangrape of Jyothi Singh in Delhi, pink auto-risckhsaws were introduced in Ranchi in 2013 [18] as a means of ensuring safer public transport for women. Scepticism about women’s ability to drive was no deterrent to Shanti Lakra, who was abandoned by her husband and lives with her children. She went for training, and is now one of the 35 women auto-rickshaw drivers to ferry women across the city in her pink vehicle.

Even though people around her expressed scepticism about her ability to drive or even the usefulness of a housewife learning to drive, Shanti pushed on.

Today, her determination has borne fruit. She is putting her daughters through school and hopes to see them become successful, self-reliant women. The auto-rickshaws have not only ensured safer public transport for women, but also dismantled gender stereotypes by pushing individuals like her into what was essentially a male-dominated profession.