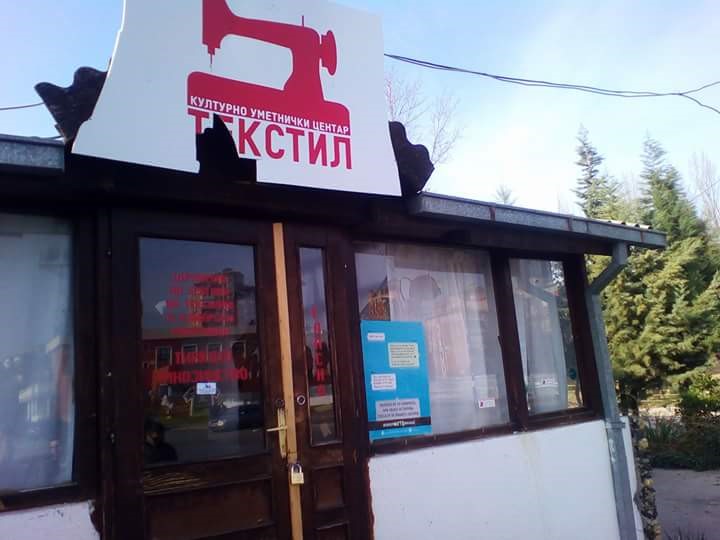 Macedonian civil society has raised an alarm after an attack on the premises of a small non-governmental organization (NGO). This incident adds to the already high tensions surrounding the country's upcoming elections on December 11, 2016.

The attack in the city of Štip, which — along with smaller towns from this eastern region — is home to Macedonia’s textile industry, seriously undermined the efforts of a small group of activists who have been trying to raise their voice against the appalling working conditions for garment industry workers in Macedonia. This area houses the better part of the country's textile and leather industries, which in 2012 employed 7.75% (or 37,217) of Macedonia’s citizens.

The small Arts and Culture Centre, “Tekstil” (“Textile”), which was opened in July 2015 by a group of activists, was subjected to stoning on the morning of November 26, 2016, and the panel bearing the logo of a red sewing machine was partially torn down.

This centre was the meeting place for activists from “Glasno — Tivkoto mnozinstvo” (“Loud — The silent majority”), an organization formed in early 2016, with the sole aim of fighting for textile worker rights. The organization has been touring textile towns in the eastern parts of the country, holding educational conferences and workskops on workers’ rights, and trying to educate workers on their right to strike, protest and to unionize. At the moment, there are no unions defending the rights of textile workers, although they form such a large, marginalized and oppressed group.

“Tekstil” provides space for art events and discussions about workers’ rights, but because of employers’ fears — and the ruling party which protects their interests — the workers who participate ask for their identities to be concealed. 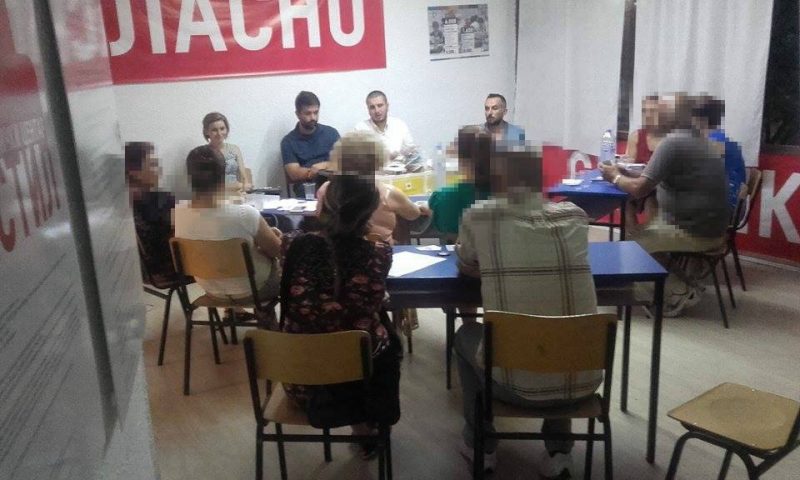 When publishing information about their activities regarding worker's rights, Glasno sometimes hides the identities of the participants who fear for their livelihoods or worse. Photo from their Facebook page.

According to a news report by local television station Kanal Plus, the police have started an investigation into the incident:

After the attack, “Glasno” published a reaction — co-signed by 74 organizations — condemning it as an attack on workers’ will to demand their rights:

Taking into account that in the past several months, this has been a free zone for textile and leather workers to meet and organize, we take it as an assault against their will for change in their status and the realization of their rights.

According to Goran Trajkov, a member of the organization who spoke in the video:

They first threatened some of our volunteers on social networks, then our promotional materials that we distributed around the city and in the region were getting damaged, and unknown persons have tried to violently break into the Centre on several occasions, all this reaching its peak with this morning’s assault when the windows were broken by rocks and the panel reading ‘KUC — Tekstil’ (‘Culture and Art Centre — Textile’) was damaged.

These workers face precarious conditions. The large, state-owned textile companies of socialist times gave way to a growing number of smaller scale private holdings during the transition period of Macedonia’s first years of independence from Yugoslavia. In a city such as Štip or the neighboring towns of Probištip, Vinica or Kriva Palanka, where job opportunities are scarce, these industries are the primary employers.

By law, the minimal wage in the textile sector is 9,000 denars (156 dollars) lower than the legally agreed upon minimal wage for all other sectors (10,080 denars or 175 dollars). But the reality is that textile and leather workers sometimes work for even less than that — for ridiculously low wages of 100 euros or 107 dollars per month — while their working hours at times exceed 50 per week.

At the moment, Glasno is in the process of organizing a textile worker protest that will take place in Štip on December 8, 2016. In the words of Kristina Ampeva, the president of the organization and a textile worker herself:

This attack is not merely an attack on the premises, the material damage can be compensated; this is an attack on the worker, who has been oppressed and exploited for decades. We are dedicated to him, and we will never give up the idea to make the worker a dignified citizen of Macedonia .