The Botched Affair of India's Demonetization Drive Against Black Money 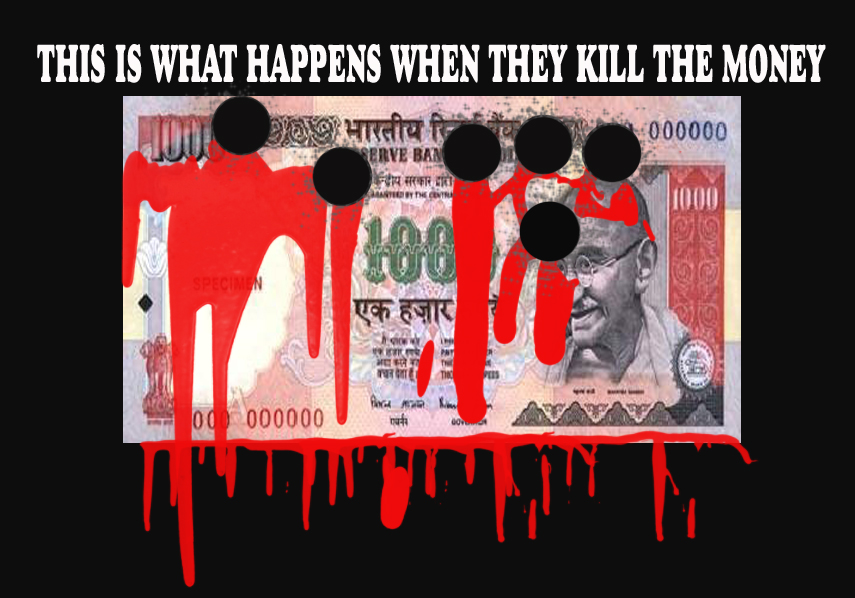 Image from Flickr by SS & SS. From public domain.

India's Prime Minister Narendra Modi, who rose to power in 2014 with a promise he would ‘battle against black money’, has made good of his word — or so it seemed on the surface. On November 8, India withdrew 500 (US $7.50) and 1,000 (US $15.00) Indian rupee banknotes from circulation to stop the flow of black money and wipe out counterfeit currency from the system.

When we dig deeper into the consequences of this move, however, we find upsetting stories. People have been forced to stand in huge serpentine queues outside banks in India's metropolitan areas and villages in a bid to exchange their money, and numerous people have supposedly died while waiting in line or when health services refused to accept the old notes.

The lack of systematic implementation has created a wider network of chaos, especially in a country that is extremely cash reliant.

Implementation of #demonetization has been poor. While the buck stops with PM, real blame for execution lies with the usual suspects in MoF

Modi's strategy is a part of various other steps he's undertaken to curb the black money menace in India, including the impending Goods and Services (GST) tax roll-out next year and a tax window and new amnesty schemes for tax evaders.

If demonetisation was meant to punish black money hoarders as per PM, why another amnesty scheme? Wasn't last scheme the absolute final one?

Let's try to dissect the politics and problems and understand the positives and negatives of the black money issue and India's demonetization drive that has left many poor Indians in a lurch with no access to medicines and daily essentials.

Nearly 86 percent of India's cash reserve was in the form of recently banned denominations — Rs 500 ($7.5) and Rs 1000 ($15) notes. This left the Indian economy hurting for cash as traders, workers, and lower strata of society heavily relies on cash transactions. The number of unbanked in India is at a staggering 233 million (around 20% of the population), according to a 2015 PeW research report. So, even if India's right-wing government wanted to clear the system of black money and get India to go cashless, analysts claim there was lack of pre-planning that created problems for citizens.

For example, Indians stood in huge queues to withdraw their money, but the Automated Teller Machines (ATM) lacked calibration in the early days of demonetization to dispense the latest currency notes because of differences in the dimensions of old and new currencies.

Found an ATM with cash and absolutely no crowd. The ATM has only 2000 notes hence no one wants ??

According to reports, more than 33 Indians have died either standing in long queues, facing shock or because of a lack of cash for emergency purposes including hospitalization and transport.

One heartbreaking example is that of a sick newborn who was refused treatment in India's financial capital, Mumbai, after parents couldn't provide money in new currency bills. The infant later died.

Meanwhile, Modi had said concessions would be allowed for use of the notes in government-run and private hospitals, chemists and petrol pumps until 11 November. This was then extended to 24 November, but numerous deaths were reported in the same period as people thronged to banks, post offices and ATM's to withdraw cash in long queues.

Prime minister targets his own ministers

Prime Minister Modi, in a bid to come clean on various allegations that his party members were tipped off about the currency ban, asked top ministers from his right-wing Bharatiya Janata Party (BJP) to submit details of bank account transactions between November to December 2016 by January 1, 2017.

Why was it done?

Modi has made promises about bringing back black money stashed by corrupt Indians in Swiss banks. While this has not materialized, a slew of measures undertaken by the government has tried unearthing the menace of black money that plagues India's highly complex economy. The government hopes to crack down on illicit funds earned from corruption or tax evasion in the form of cash and also to tackle fake currency.

Meanwhile, only 2 to 3 percent of Indians actually pay taxes and India loses hundreds of billions of dollars in unpaid taxes every year, and nearly 90 percent of transactions in India are conducted in cash.

Some supportive, many others not so

Many Indians on social media and economists too are critical of demonetization, claiming it could block India's fast-rising gross domestic product (GDP) figures and slow down manufacturing in Asia's second-largest economy.

Meanwhile, a 19-year-old student and a self-claimed Right to Information Act activist named Abhishek Mishra was arrested by the Madhya Pradesh police for his social media posts, which attacked Modi and other politicians on the subject of demonetization.

India's former Prime Minister Manmohan Singh last week called demonetization a monumental mismanagement that might dent India's GDP by 2 percent. He said the deaths of people and distress among the poor, farmers and small traders had convinced him that demonetization had led to organised loot and legalized plunder by the government.

Demand and supply is the basics of any system, legal or illegal, and unless the government seriously tackles the supply side of black money corruption, the unofficial economy will continue to flourish. This corruption can only double with the newly introduced Rs 2,000 crore notes.

There is no reason why everybody who should pay taxes is not paying taxes. I would focus more on tracking data and better tax administration to get at where money is not being declared. I think it is very hard in this modern economy to hide your money that easily.

Demonetization has also opened up debates about nationalism in India with critics being panned as anti-nationals. A senior army officer was criticized for his Facebook post condemning the currency ban while awaiting his turn in an ATM line.

The actual verdict on the demonetisation will be out only after December ends as aptly put forth by political analyst Devdan Chaudhuri:

The fall-out of the policy is unfolding now. So the next month will be critical to determine what people finally think of this move.