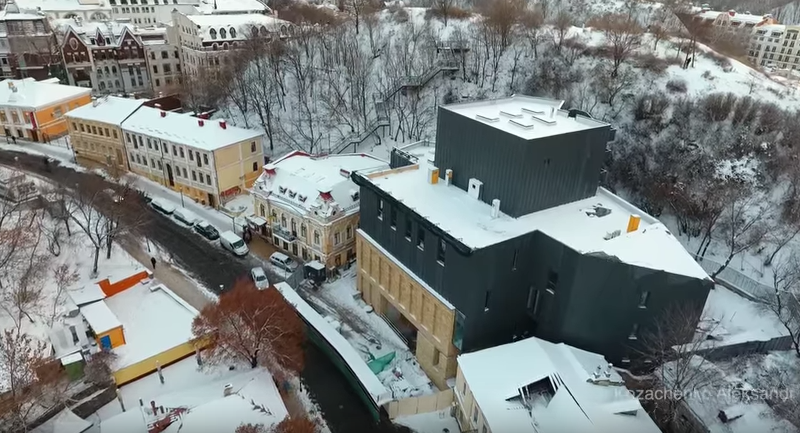 On Tuesday, construction workers unveiled the new “Kyiv Dramatic Theater on Podil” on Andriyivskyy Descent, one of the oldest streets in the city. Onlookers greeted the reconstructed theater, which had been fallen into disrepair over the last two decades, with mixed reactions: some applauded and cheered the design while others criticized its modern appearance and chanted “shame!” as workers lifted a screen covering the building's facade.

The reconstruction project, which began in 2015 and is being financed by Ukrainian President Petro Poroshenko's Roshen company, started as a charitable cause for the president's wife, Marina. Yuriy Sak, a public relations officer and one of the theater's actors, told journalists at the unveiling that a member of the theater's acting company is “on good terms” with Marina Petroshenko: “They were able to arrange a deal. They just explained to them straightforwardly: unless a private investor comes, it's never going to be finished. Never, because people will keep stealing money. This is the reality of our times. Once a private investor comes in, you get a fence, you get security, things are getting done, nobody's stealing nothing. A year and a half later [it's done].”

The old theater had become dilapidated and exposed to the elements; though the inside structure of the building remained intact, construction workers rebuilt much of the rest of the theater, Sak said: “For 20 years, it's been crumbling down. It was shit,” Sak said. “And now we have something to be proud of.”

The theater was originally supposed to be built in the style of other buildings on Andriyivskyy Descent, but Oleg Drozdov, the project's Kharkiv-born architect, ultimately took the building in a different direction. The theater's supporters say it's time to take Kyiv's architecture into the 21st century.  Sak told journalists that the building, which is equipped with infrastructure for people with disabilities, will have a modern stage and state-of-the art lighting equipment. “If you're building a theater in 2016, let's build a cool one. Build something so that when people come to Ukraine, they say ‘you gotta go and see that.'”

While it was under construction, everyone was sure that the facade was temporary, for “assembly.” But the opening is here and the curtain has been lifted. As it turns out, the theater building, positioned in the heart of old Kyiv, was supposed to be built in this style. What we saw today – it's the design of a crematorium, of an industrial ventilation system. Or the first and second blocks of the Chernobyl Nuclear Power Station, which Soviet engineers and architects also built with the help of black cubic structures.

Critics took to social media, using the hashtag #ТеатрНаПодолі to express their discontent.

The sarcophagus over the Chernobyl reactor looks nicer than #Theater on Podil.

I want to introduce you to my younger brother. It's not a theater, but everything's still ahead of him

And this is my cousin, who lives in the U.S.

“The unique original” vs. “the pathetic copy”

The theater is scheduled to open in time for “Kyiv Day,” the capital city's titular holiday that is celebrated on the last weekend in May.