Through Hardships to the Stars: These Latin American Children Won’t Let Garbage Stand in the Way of Music 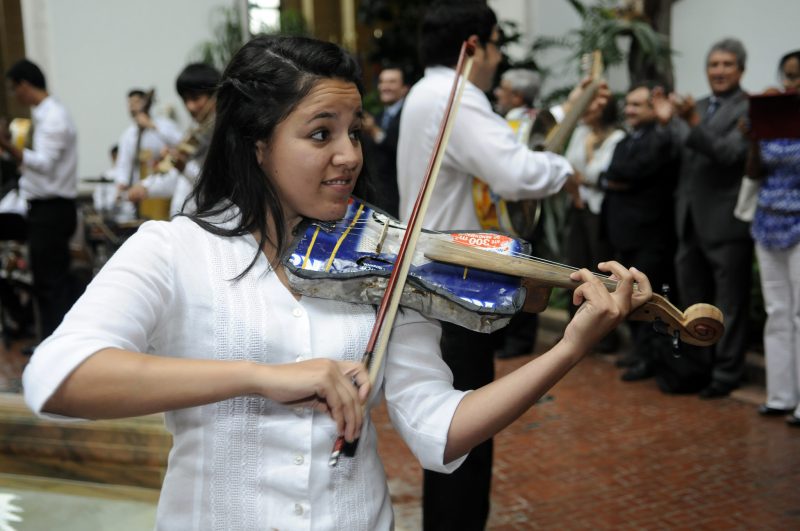 Recycled instruments orchestra from Cateura, Paraguay, during a concert in Washington DC. Image on Flickr by user OEA-OAS (CC BY-NC-ND 2.0).

What do a Mexican music school from the Vicente Guerrero community in the state of Oaxaca and children from the Paraguayan city of Cateura have in common?

That the music being played in both places has not only changed the kids’ lives, but has a deep connection to…garbage.

Music that lives alongside garbage

Vicente Guerrero is located on the edge of a large landfill, just 16 kilometers south of Oaxaca — an old colonial city that's popular with tourists — but a world away from the nearby pre-Columbian ruins and its world famous cuisine. For some years now, La banda de música (The music band) has played in the community. It's a project that has evolved into a symphony orchestra made up of children and adolescents, who have found a way to overcome the poverty surrounding them with their musical instruments:

A music school with 100 students has become a focal point for the community of Vicente Guerrero in Oaxaca.

The British newspaper The Guardian wrote about the project:

The community, in one of Mexico’s poorest states, has a reputation for drug abuse and gang violence. But it is undergoing a transformation after a fortuitous encounter with a French pilot helped launch a musical venture offering rare hope to its youth.

As soon as they get out of school, they almost run back to their homes; and as soon as they have lunch, they head through dusty roads to take up their grand passion. They always arrive smiling, with lively eyes, playing around, amidst hustle and bustle. […] They learn day by day to skilfully play the trumpet, the trombone, the piccolo, the clarinet, the oboe, the flute, the French horn, the kettleddrum, the bongos and the conga.

Garbage made into music

More than 7,000 kilometers south from Vicente Guerrero, the children of Cateura — a village practically located on top of the main landfill of Asunción, Paraguay's capital — play instruments made out of recycled materials:

[They perform] musical pieces with recycled instruments, made from domestic solid waste, at the musical instrument workshop the group has in Cateura, where recyclers under the guidance of Favio Chávez […] have started to use “garbage” parts to fashion instruments that make musical sounds. The instruments […] imitate violins, violas, cellos, double basses, guitars, flutes, saxophones, trumpets, trombones and percussion instruments, all made out of garbage. Their repertoire includes classical music, folk music, Paraguayan and Latin American music, music by The Beatles, Frank Sinatra, among others.

In an article by US newspaper the Los Angeles Times, Favio Chávez, a local ecologist and musician who is teaching the children of Cateura to play, remembers their early days:

At first it was very difficult because we had no place to rehearse and we had to teach in the same place where the parents were working in the trash […]. The children knew nothing about music and it was very difficult to contact parents because many of them do not live with their children.

That all changed when Favio was shown something he had never seen before: a violin made out of garbage. Today, there is a whole orchestra of assembled instruments, called The Recycled Orchestra. A documentary called “Landfill Harmonic” chronicled the musical effort:

The world generates about a billion tons of garbage a year. Those who live with it and from it are the poor – like the people of Cateura, Paraguay. And here they are transforming it into beauty. Landfill Harmonic follows the orchestra as it takes its inspiring spectacle of trash-into-music around the world.

The orchestra has even performed its music for Pope Francis:

The Orquesta de Instrumentos Reciclados Cateura were invited to play for Pope Francisco, and presented him with a… http://t.co/gPXweZrNqV

These two groups, as well as some others, show that with music, the possibilities are endless.